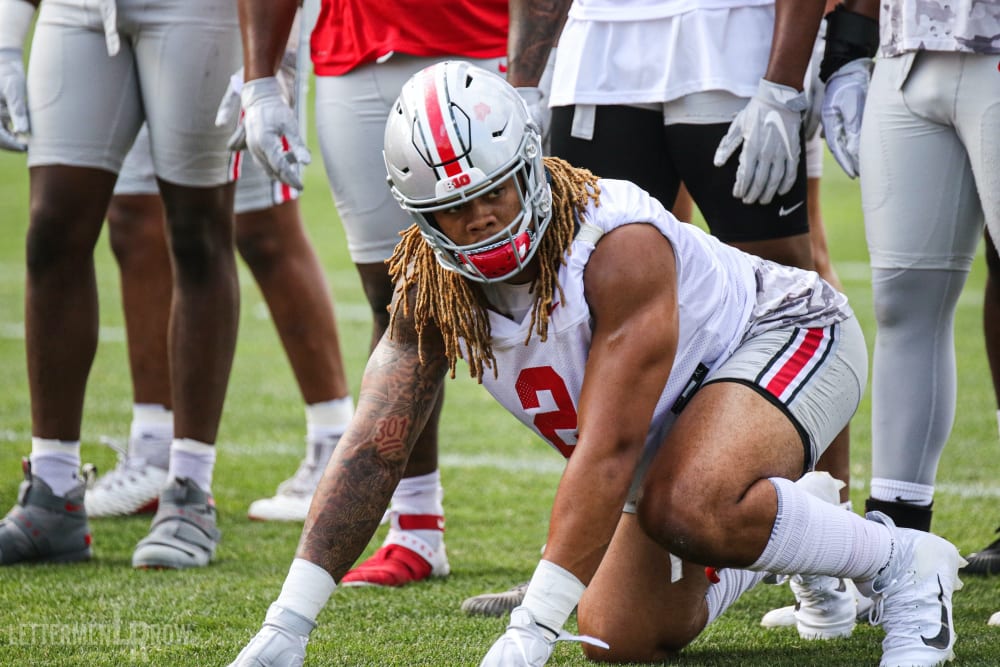 COLUMBUS — Ryan Day has technically been through this before at Ohio State.

As the interim coach a year ago, he’s taken control of the team heading into a training camp. Day has been the guy to give the fiery speech on the practice field. And he’s been the guy at the podium to be the voice of the program.

But last season was a trial run on a short-term basis. Friday was the real deal as the Buckeyes reported for the opening practice of what promises to be a grueling August with Day now firmly, permanently entrenched as the leader of the program.

“Good to draw upon, check your notes, things you said, things you did. That helps because, again, it’s not the first time doing it. It was a good day today. We’ll just keep building and check our notes as we go.”

The Buckeyes will have plenty more to add to Day’s journal leading up to the opener on Aug. 31 against Florida Atlantic, and the morning session on the outdoor fields at the Woody Hayes Athletic Center is only a starting point.

Ohio State wasn’t in full pads, either, but there were still a few notable takeaways. Here’s what Lettermen Row observed as the Buckeyes launched preparations for Day’s first full season in charge.

Ohio State remains adamant that it doesn’t have a depth chart at quarterback, but somebody has to be the first in line to lead the stretching group, take the first throws in drills and line up with the first-team offense. It should come as absolutely no surprise that Justin Fields was that guy on Friday morning, beginning what is widely assumed to be his rise to take over the most important job on the field for the Buckeyes.

The media only had three periods to watch the quarterbacks, and they were positioned about as far away as possible from the viewing area. But Fields still looked like a different passer than during his inconsistent spring, delivering the football with strength, accuracy and confidence during drills where he appeared shaky at times in March. He’s not a finished product or officially a starter, but Fields looks to be on his way. 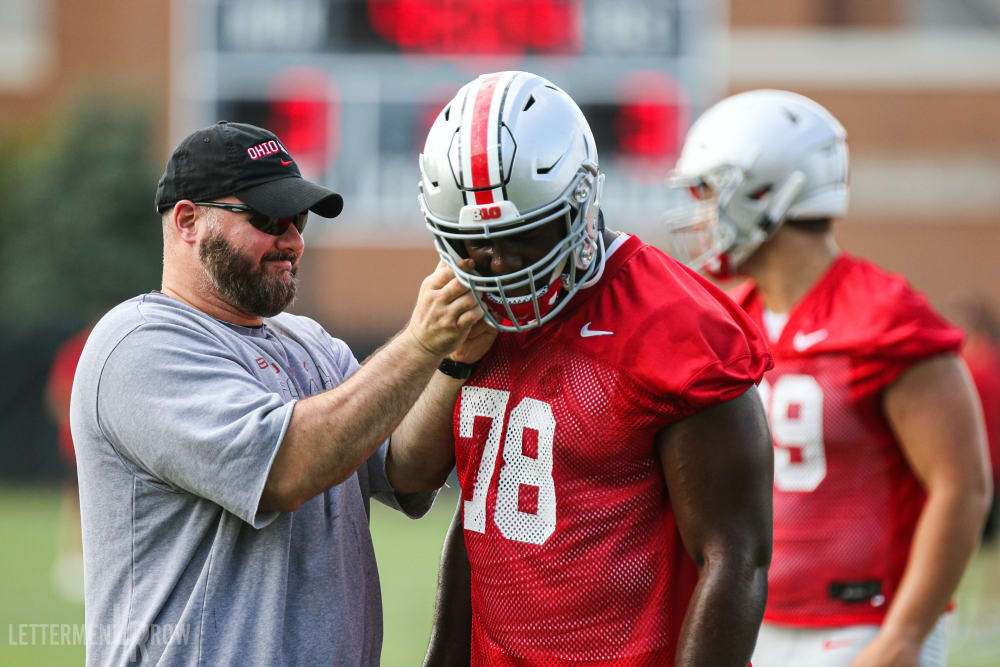 Ohio State offensive tackle Nicholas Petit-Frere has an chance to be a starter for the Buckeyes. (Birm/Lettermen Row)

The sample size couldn’t be any smaller, and in the grand scheme of things, Joshua Alabi getting a couple first-string reps in place of Thayer Munford doesn’t really mean much. As valuable as Alabi is for the Buckeyes thanks to his experience and proven ability to handle the job at tackle, Munford is eventually going to be the starter at left tackle.

But the fact that Ohio State is already willing to do a little rotating and tweaking of the lineup during drills is an encouraging sign for the depth of that unit, which was also reflected with Branden Bowen working behind Nicholas Petit-Frere at right tackle while Jonah Jackson went through his first practice with the program getting first-team reps at left guard.

“We’re going to roll those guys up front,” Day said. “Especially the first few days, some guys are going to rep with the ones, some with the twos. Some are on a pitch count with volume control to make sure we can ease them back into practice. You’ll see a lot of guys running with the ones and twos.

“As camp goes on, it will be more solidified.”

There was only a brief glimpse of Ohio State in a full-team situation, and the formation it showed on defense was a traditional 4-3 grouping that didn’t include the Bullet. That personnel package had the exact same starting linebackers as last season, with Malik Harrison and Pete Werner flanking Tuf Borland.

Now, there is still plenty of time for competition to play out for the Buckeyes — particularly in the middle, where Teradja Mitchell is expected to push for the job. But it’s still notable that the trio remained intact at the start of camp, because it’s a possible reminder that the problems of the last couple season weren’t about the personnel as much as the coaching. A healthy Borland has shown he can be a game-changer, Harrison is one of the freakiest athletes in the Big Ten and Werner more than held his own during his first year as a starter.

There’s a long way to go, and Ohio State has a wide array of defensive packages that will open up opportunities for other linebackers and defensive backs to get on the field. But when it goes basic, there are still familiar faces on the field.

The physical tools have always been impressive, and Chase Young has still found a way to improve them heading into his junior season. And he’s also adding a louder voice to his repertoire, helping set the tone for the Buckeyes as a leader of the Rushmen and the defense as a whole.

Young was barking early and often at his teammates to increase the intensity during drills that had the Buckeyes attacking big, rolling donuts in the opposing backfield. And in terms of a tone-setter, it’s hard for Ohio State to ask more from one of the nation’s best players than what it was getting from Young to open camp.

“I see more seriousness now,” Day said. “I think he knows this is his time to step up and be a leader.”