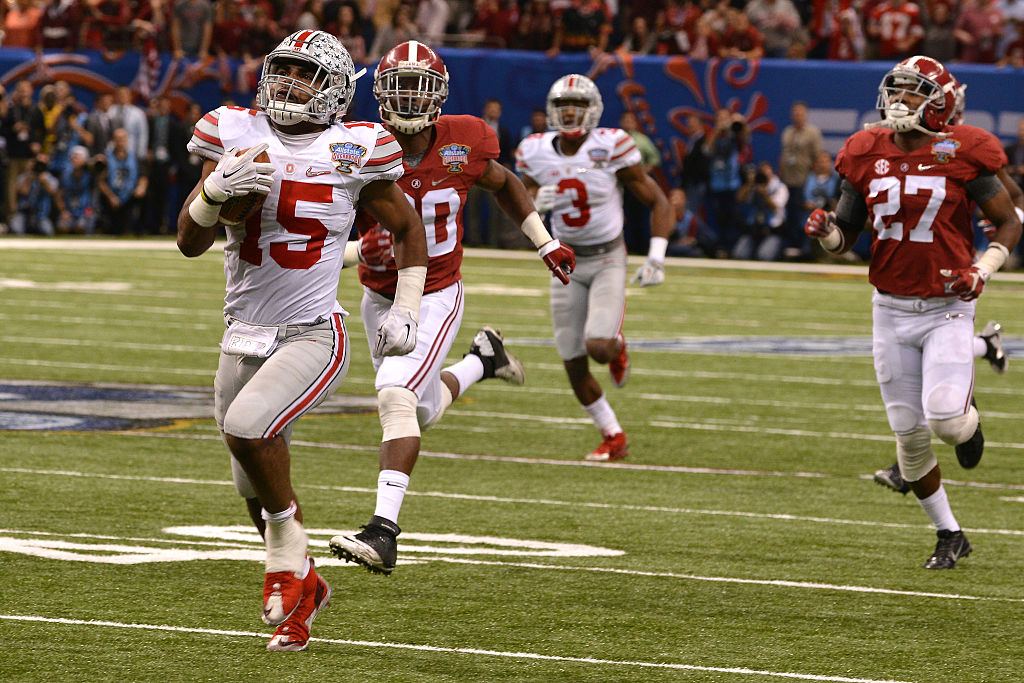 COLUMBUS — Ohio State has a storied running back tradition.

Some of the most dominant, explosive players to ever play college football suited up as Buckeyes running backs. Archie Griffin is the only two-time Heisman Trophy winner in college football history. Dominant running backs J.K. Dobbins and Ezekiel Elliott have played for Ohio State in recent years.

Tailback prospects come to Ohio State because they want to etch their names next to Eddie George and Keith Byars. And the all-time great Buckeyes have the signature game. The games in which Michigan couldn’t bring them down. The games in which they delivered on the biggest stage.

In honor of Running Backs Week at Lettermen Row, here are the top-five single-game running back performances in Ohio State history: 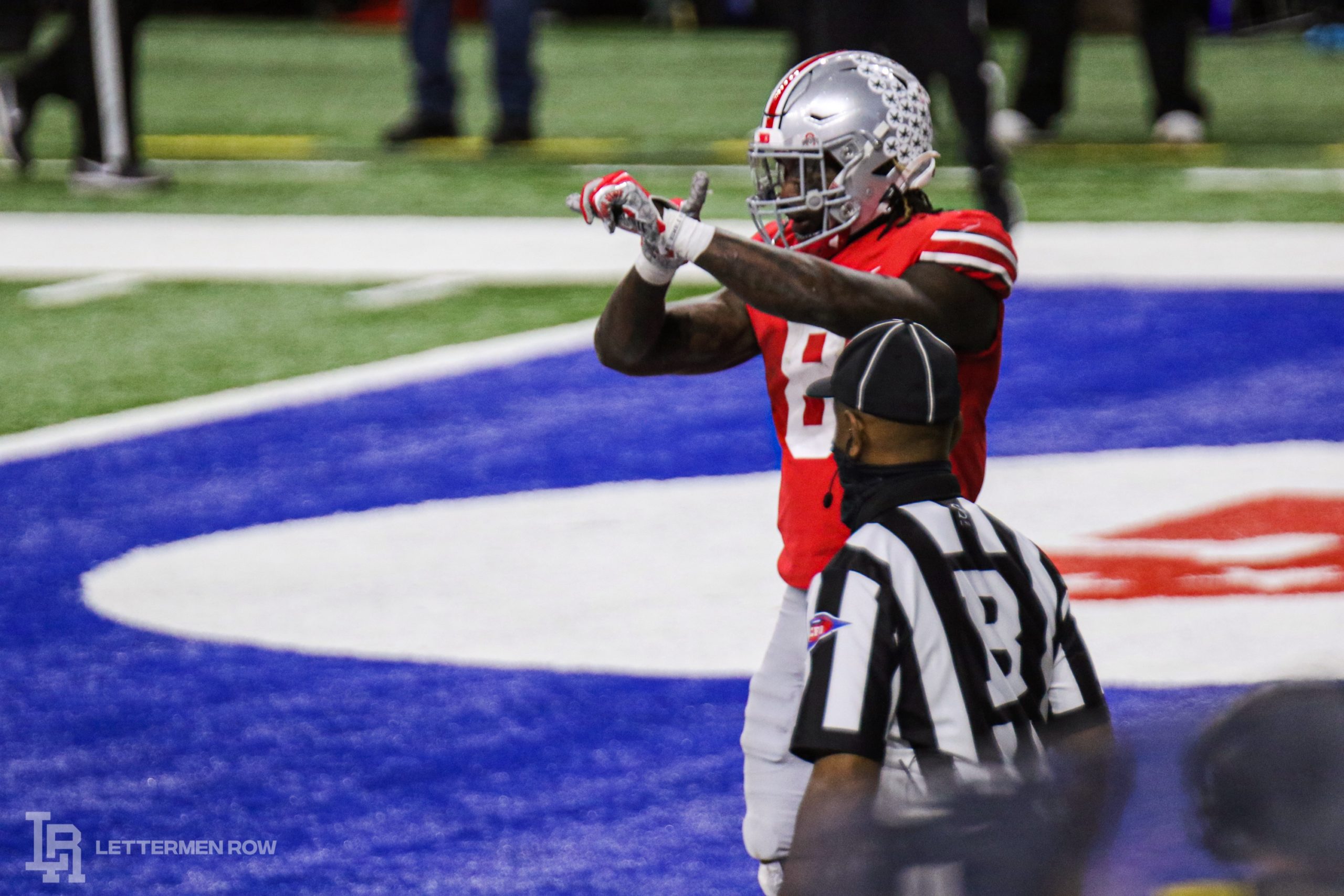 Maybe it was the stop-and-go, COVID-induced season, but Trey Sermon didn’t seem like a major factor for most of 2020. The Oklahoma transfer didn’t tally his first rushing touchdown with the Buckeyes until early December at Michigan State. But the 100-yard game against the Spartans gave him confidence headed into the Big Ten Championship Game, enough to deliver when the Buckeyes needed someone to step up in Indianapolis. With Chris Olave in COVID-19 protocol, the passing game sputtered. Sermon pieced together a 29-carry, 331-yard performance paired with two touchdowns to deliver Ohio State its fourth-consecutive conference championship, breaking Eddie George’s record for the most rushing yards in a single game in the process. The tailback rushed for 144 yards on nine carries in the third quarter and another 127 yards in the fourth for the Buckeyes, awakening Ohio State’s stagnant offense. With the win, Ohio State secured its ticket to the College Football Playoff.

Before Sermon rushed for over 330 yards in the Big Ten Championship Game last season, Eddie George held the title of most rushing yards in a single game. John Cooper’s teams always struggled with Illinois, including a double-digit loss in 1994. But George wasn’t going to let Ohio State fall in 1995 when the Fighting Illini visited Columbus. With Terry Glenn injured, the tailback ran for 85 yards on Ohio State’s opening 99-yard touchdown drive. Early in the third quarter he put the game away and secured the Heisman Trophy, ripping off a 64-yard touchdown run. George finished the day with 36 carries for 314 yards and two rushing touchdowns. He added a score through the air, too, as the Buckeyes routed Illinois 41-3. 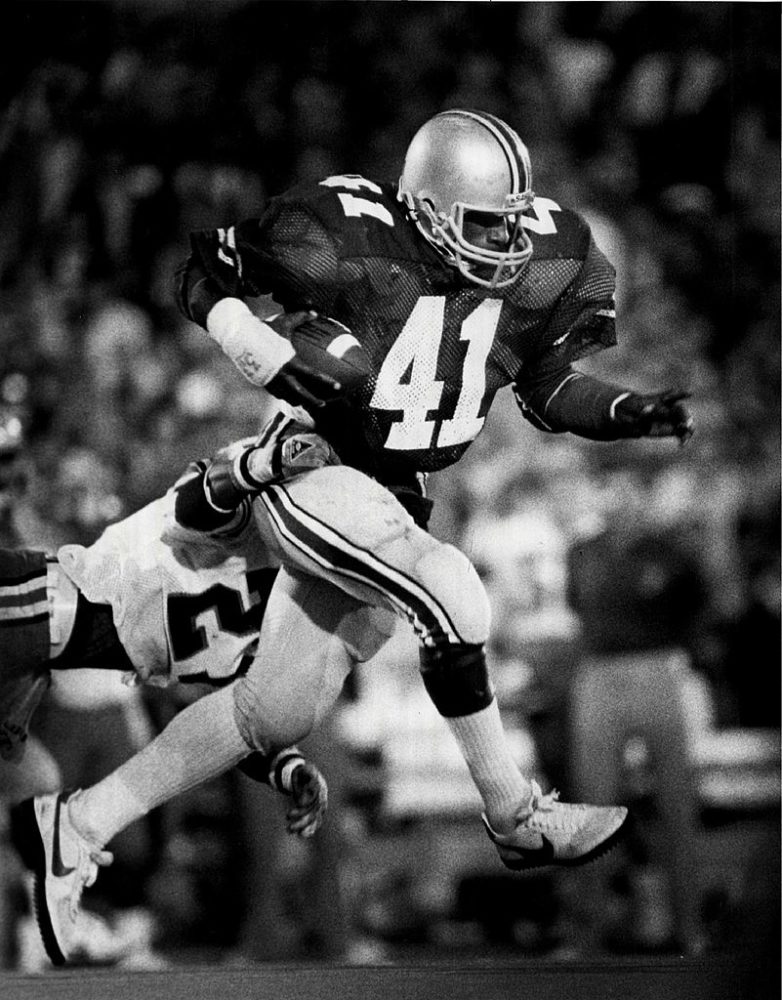 Hosting Illinois in mid-October at the Horseshoe, the Buckeyes came out flat in the first half. Keith Byars had a rare first-quarter fumble as the Fighting Illini built a 24-0 lead after a quarter. Byars started to chip into the deficit late in the second quarter, though, with a 16-yard touchdown run with 4:13 remaining in the half. A quick 30-yard touchdown pass to Chris Carter made it 24-14, and Byars cut Illinois’ lead to three on a 4-yard run with 23 seconds left before the half. An early third-quarter touchdown run from Byars gave Ohio State its first lead of the day. The junior provided the signature play of his career later in the second half, kicking off his left shoe when it came loose without losing a stride on his 67-yard touchdown run. The most famous play of his career, the run marked his fourth touchdown of day. He broke the Ohio State record, which still stands today, in the fourth quarter with his fifth rushing touchdown of the day to deliver the Buckeyes a 45-48 victory over Illinois. Byars finished the day with 274 yards on 39 carries along with the school record for most rushing touchdowns in a game.

No other Ohio State running back has delivered on a higher stage than Ezekiel Elliott. Holding on to a 34-28 lead late in the 2015 Sugar Bowl against Alabama, the Buckeyes faced a 1st-and-10 from their 15-yard line. The running back took the handoff from Cardale Jones, rushed to his left and broke through the line. Elliott used his speed the rest of the way as Alabama defenders tried to catch up. The 85-yard touchdown run sealed Ohio State’s upset of the No. 1 Crimson Tide and its trip to the national championship game. The longest play Alabama allowed all season, Elliott finished the game with 230 rushing yards on 20 carries along with two touchdowns. He would go on to rush for four scores against Oregon in the College Football Playoff finals but his 85-yard run in the semifinals is what put the Buckeyes in the national title game.

After splitting carries with Mike Weber for most of 2017 and 2018, J.K. Dobbins became the bell-cow in his final season in Columbus. He proved he was worthy of the duties, too, breaking the 100-yard mark in 10 games. But the 5-foot-10, 217-pound tailback saved his best for Ohio State’s arch-rival. Dobbins cracked the 200-yard barrier at Michigan, rushing with a fury against the Wolverines. He ripped off five runs of 20 yards or more, setting up a dominant Justin Fields’ pass attack. Dobbins finished the day with four touchdowns and 211 yards on 31 carries. His final touchdown run of the day finalized his legacy: A 33-yard run through the Michigan defense that iced Ohio State’s 56-27 blowout win.

How ‘unselfish’ Buckeyes tailbacks can thrive in two-back system