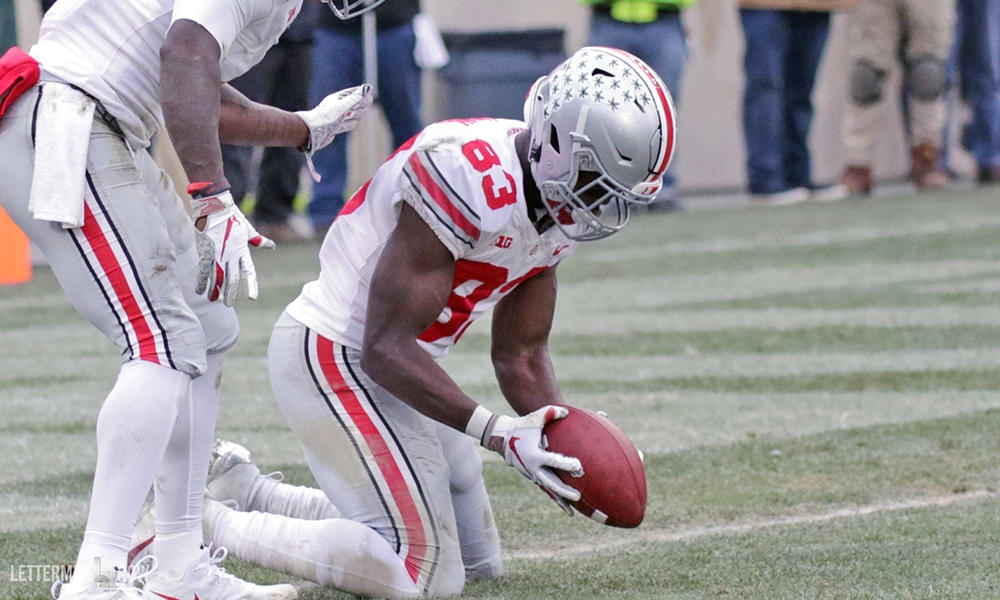 He’s earned his praise from Ohio State for five years now because of his willingness to do the little things. He’s a devastating blocker for the offense. He’s a reliable pass-catcher, hauling in eight touchdown grabs already this season.

But Saturday? In a pivotal game on the road at No. 18 Michigan State, McLaurin’s legend grew because he just tries harder than most people do.

It’s that simple. And it’s an example that the fifth-year senior has set which has vaulted him into rare air in the mind of Urban Meyer.

“It’s with great reverence, and I go back to guys like Bradley Roby to Devin Smith to Denzel Ward, Gareon Conley — for the guys that cover us every day, those are the gunners as we call them — Terry is as good as there is,” Meyer said after the Buckeyes 26-6 win against the Spartans. “He might have taken over the title as the best we’ve ever had. What he’s done for our program.”

Just another look at that effort on special teams from @TheTerry_25 because it was so beautiful. pic.twitter.com/JV53lc0nlB

What McLaurin is doing for the program is setting the tone for young guys coming down the pike. A fifth-year senior and captain, McLaurin’s role isn’t what most receivers relish, but he doesn’t seem to care. What matters to him is going as hard as he can for his teammates and being a much-needed leader for a team that, at times this season, has appeared rudderless.

“I pride myself on being a leader for this team, making plays when we need it, no matter how tired I am.”

Humble and hard-working, McLaurin wasted no time in letting the young guys in the Ohio State locker room know what’s needed to really make an impact on a Buckeyes football game. There are a lot of players that came into Columbus with far more hype than 6-foot-1, 205-pound receiver, but few have played as big a role as he has since his arrival in January of 2014.

The Ohio State roster is chock-full of 5-star talents sitting on the bench because they haven’t done the little things in a big way.

“That’s part of our plan to win: Coach Meyer preaches it, he calls it ‘the gospel,'” McLaurin said. “We have a big board, and I want to say there’s a 3-percent chance for teams trying to score the ball if they’re starting from inside their own 5-yard line. We preach that. We believe in that.

“I was telling the young guys when they brought me up [after the game], if you want to make your spot on this team, and earn a lot of respect — especially from Coach Meyer — special teams is the way to do it.”

Other young players who have recently made an impact for the Buckeyes, guys like Brendon White and Chris Olave, have followed McLaurin’s example. The Buckeyes have a couple of future stars at linebacker in Dallas Gant and Teradja Mitchell doing the same. The bottom line in Columbus is that when a player comes into the Ohio State football program, he better be ready to bring it from day one.

And for a lot of young guys, that means humbling yourself and putting ego aside. That means playing special teams — and playing them as hard as possible.

Johnnie Dixon, another fifth-year senior captain, struggled to catch the ball against the Spartans, but he still grabbed a punt at the 2-yard line that led directly to Dre’Mont Jones’ game-changing touchdown. If a young guy at Ohio State wants to know what’s keeping him off the field, the answer might not be that complicated.

“[If] you can’t necessarily get into a rhythm on offense, special teams is a good way to make an impact on this team,” McLaurin said. “Its an offense, defense and special teams game. The offense wasn’t clicking and the defense picked us up a lot, and our special teams really allowed us to gain an advantage.

“I feel like that was the difference in the game. Special teams has always been a big part of our team.”

And it’s a key part of the legacy Terry McLaurin is leaving.