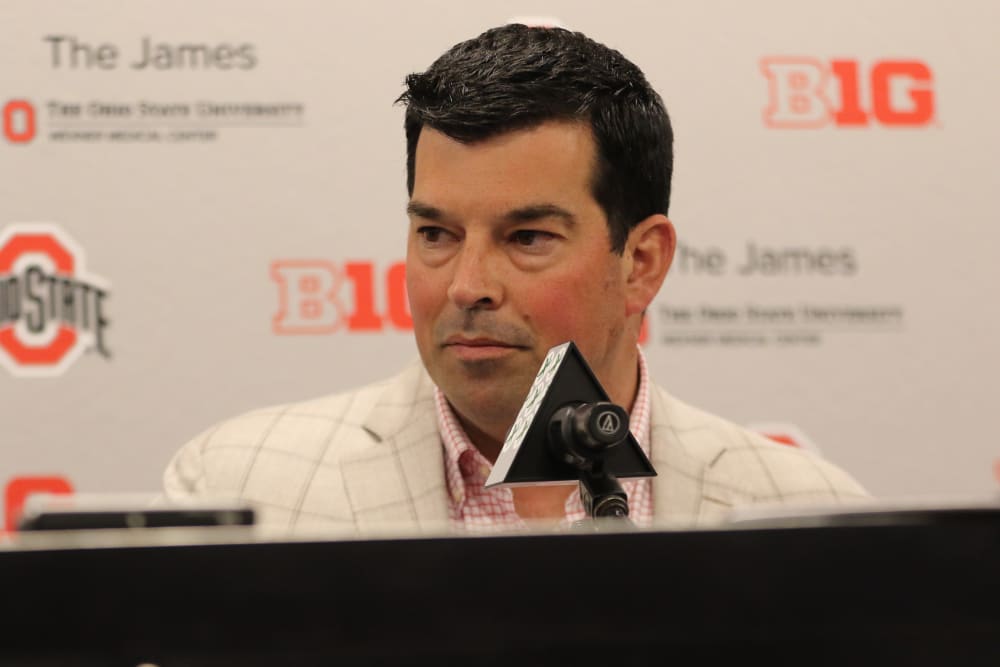 COLUMBUS — The importance of the summer program at Ohio State had just been stressed by Ryan Day in the team room, and the example was clear barely an hour later on the practice field.

The new wave of Buckeyes have only just arrived on campus, and they were already getting a taste of the workouts ahead of them in a group session on a warm afternoon the Woody Hayes Athletic Center.

Obviously there were no pads anywhere in site, and the instruction that can come during June and July from the coaching staff is limited. But one thing hasn’t changed as Day takes charge of the Buckeyes: The offseason belongs to strength coach Mickey Marotti, and the pressure is on the players to make the most of the development period before training camp starts in less than two months.

“I’m looking forward to seeing all of them,” Day said Wednesday in his first press conference since the end of spring camp. “Interesting group, great group, we just went through them all and tested them yesterday. There’s a chance in that group for guys to have some impact. But in order to get an idea of who that’s going to be, it’s so early — they just showed up today.

“I’m very excited about them, very interesting group. There are some positional needs there even for this year, Steele [Chambers] at running back, Craig Young at a position of need on defense and a couple guys on the offensive line. It will be interesting.”

That process is only just beginning for the newcomers, of course. But getting them up to speed so they can try to contribute on a deep, talent-laden roster comes with the same sense of urgency that Ohio State uses to get the veterans ready to contend for a national championship.

So, even on a Wednesday in June, the intensity with the program hasn’t dropped at all. What else was there for Lettermen Row to learn from the rare summer visit to the practice facility? Here are some takeaways from the press conference with Day and interviews with the coordinators.

Ohio State still doesn’t have an official starting quarterback, and both Day and co-offensive coordinator coach Mike Yurcich were adamant they would carry over a competition for the job into training camp. But the heavy favorite to claim the spot remains Justin Fields, and considering his relative experience both with the Buckeyes and as a college quarterback with just one year under his belt, that makes this summer of development critical.

“When you go back and look at him, I always have to stop myself because this is somebody who has so much talent,” Day said. “Physically, God gave him a ton of gifts. But learning to play the position is something you learn through experience. He just doesn’t have that experience, and we can’t substitute that.

“But we have so many tools and resources in place that he can use to get himself advanced along the way. There’s film, there’s workouts, there’s throwing on his own with the receivers, tight ends and running backs — he has to do that on his own in the summer, we can’t do that with him. … We have different ways to do that in the summer, virtually reality and all kinds of tools, to get him and all of our quarterbacks advanced. It can’t just be the eight hours each week, it’s got to be more than that on his own.”

The quarterback depth chart has undergone a complete overhaul since last year, and that can certainly present some challenges. Most notably, the Buckeyes needed an experienced arm to compete with Fields in training camp and who might be prepared to play if necessary — which made the availability of a graduate transfer with ties to the program like Gunnar Hoak a huge deal.

Ohio State obviously wasn’t in a position after losing Matthew Baldwin to be overly choosy since the transfer portal options of passers with immediate eligibility were limited. But Hoak’s experience at Kentucky, Day and Yurcich’s evaluation of his ability and the potential value of a homecoming all pointed to a perfect fit.

“Every quarterback that we bring into our program will be evaluated thoroughly,” Yurcich said. “He’s a guy who fits our system. He’s a very cerebral guy. I think he has been coached really well. Being in college football for a number of years he is a little bit more ahead of the curve than, say, a true freshman. He’s a very intelligent guy.

“Not being able to work with him on the field throwing the ball yet, it’s really hard for me to elaborate on an individual who hasn’t had one practice. But that’s the situation in a lot of rooms.”

Ohio State’s couldn’t have changed more. But it’s heading into training camp in much better shape than perhaps could have been reasonably expected.

The Buckeyes want the flexibility to unleash multiple different defensive looks. But how many should it really try to use this season?

There was no clear-cut answer leaving spring, and the revamped coaching staff on that side of the ball still isn’t in a hurry to pin down an answer. It’s possible that approach could change every week, which is a potential luxury afforded to the Buckeyes thanks to all the talent coordinators Greg Mattison and Jeff Hafley have inherited.

“There’s also the part where you’d like to get that young freshman or young sophomore that’s really starting to prove himself, without having to do everything, plug him into one or two defenses where you have a better athlete running the stuff.”

What does that mean in terms of variety? The only thing that still seems certain at this point is that there will be more of it for the Buckeyes.

The talent has been there all along, which made the struggles a year ago in the defensive backfield a bit mystifying for Ohio State. But starting with a clean slate and working from the ground up, Hafley is already seeing plenty of reason for optimism with a secondary that is loaded after several years of accumulating some of the most talented recruits in the country.

“It’s still a game, and those guys have to have fun. But when they’re doing that with the technique, with the ability, and they do that together — we’re going to be pretty good.”