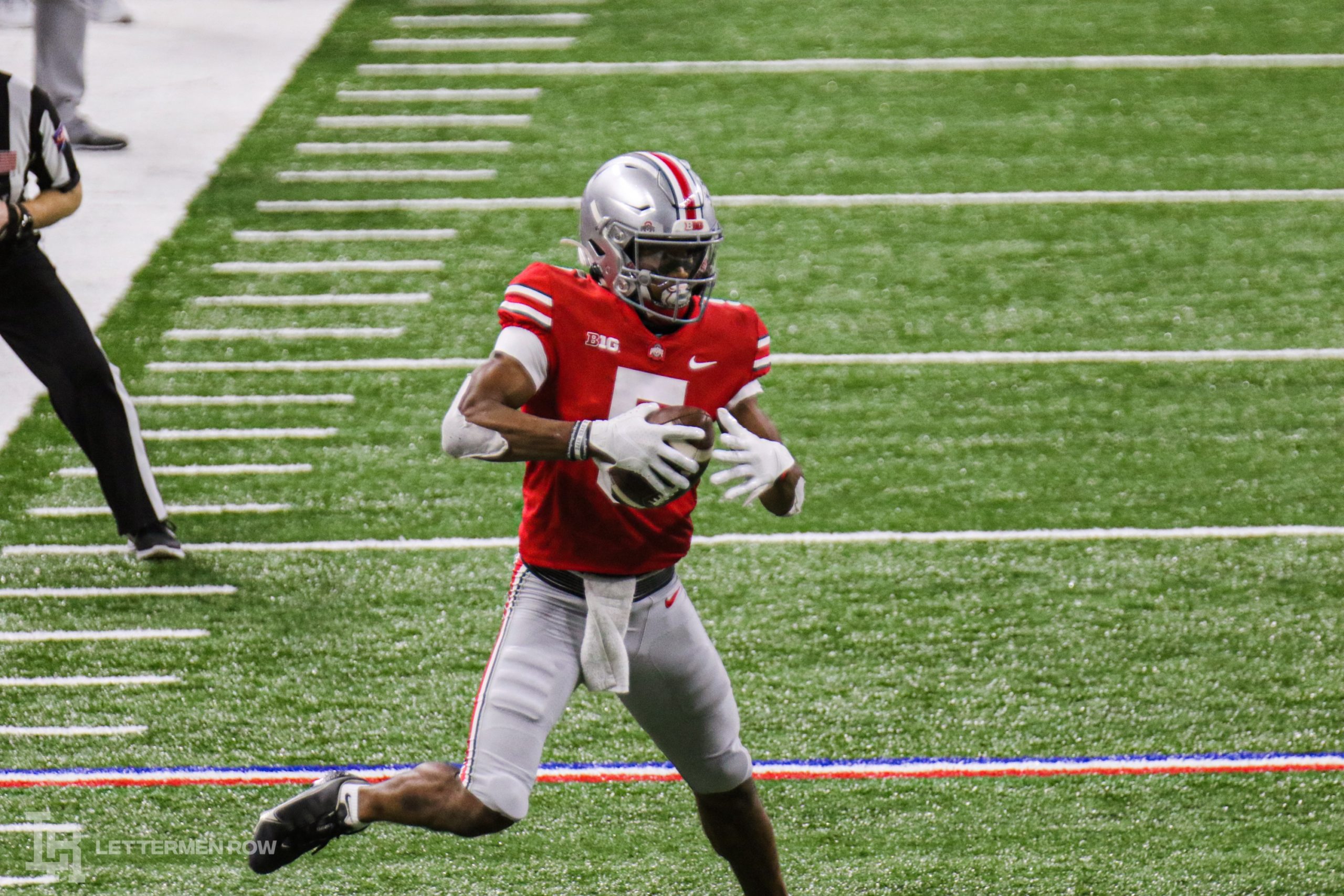 COLUMBUS — If it’s advantage, Ohio State never wanted it in the first place.

The truth is there are almost certainly more negatives than positives to playing an abbreviated schedule, and that starts with the calendar still playing tricks on the Buckeyes.

Ohio State is heading into Game No. 7, a date that would normally fall around Halloween instead of New Year’s Day. The bodies certainly do have a little less wear-and-tear from game action for the Buckeyes heading into the College Football Playoff this year, but that has come at the expense of using those reps for growth, development and figuring out the best way to unlock the potential on a star-studded roster.

The sample size was absolutely large enough for the Buckeyes to prove they deserved their invitation to the Sugar Bowl to play Clemson. But anybody trying to spin that into an edge for Ohio State isn’t really being honest about the challenges the setbacks presented along the way — and still present heading into Friday’s semifinal.

“I don’t know what it all means,” Ohio State coach Ryan Day said last week. “We certainly don’t have the game reps, especially for the younger guys, to find out what they can do. And we haven’t had our best game yet this year.

“We played some good games, but we haven’t played our best game this year. We’re going to have to play our best game again to beat Clemson.”

The Buckeyes have put together dominant stretches that have shown what that would look like, but they learned a painful lesson last year that it takes a full four quarters to beat a team like the Tigers and move on to play for the national title. What’s it going to take to get over the hump this time? Heading into the final practices ahead of the Sugar Bowl, Lettermen Row is getting ready for the week ahead in New Orleans with Five Questions for the Buckeyes. 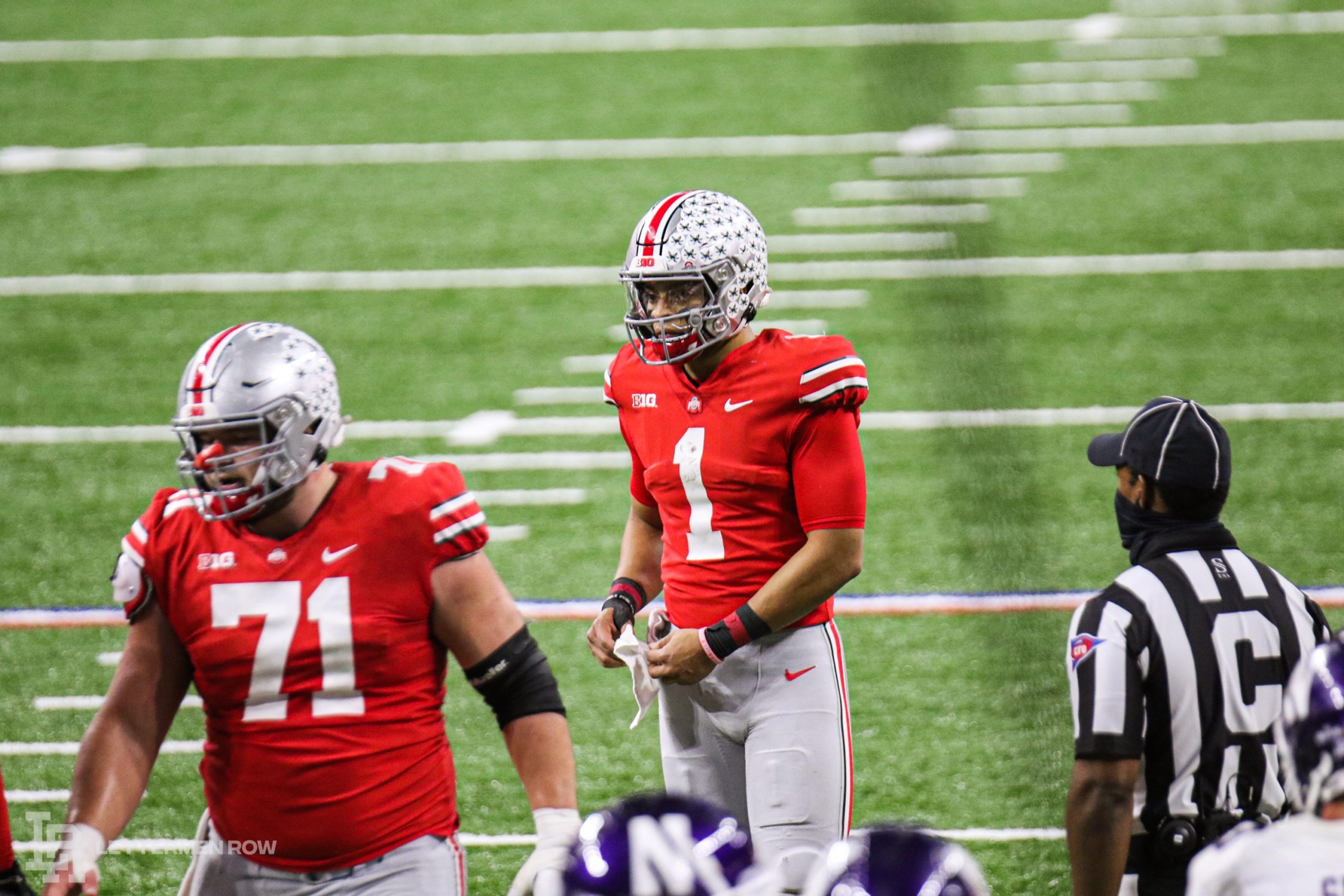 How is Justin Fields feeling with sore thumb?

The deja vu for the Buckeyes ahead of the Clemson rematch extends all the way to the uncertainty about the health of superstar Justin Fields. And while the sprained thumb would seem much more manageable than the knee issue that robbed him of his elite mobility in the last College Football Playoff, Fields tends to be pretty upfront about what he’s dealing with physically. In fact, last year the Buckeyes thought he might have been too honest when giving updates about just how much the knee was bothering him.

Ohio State has already indicated it expects Fields will be ready for the Sugar Bowl, and there was never really any doubt that he would play through any pain in the first place with so much on the line against Clemson. But Fields will be addressing the situation on Monday evening after practice, and it will certainly be interesting to hear whether he missed any practice time while recovering or if he expects it to limit his passing ability in any way against the Tigers by New Year’s Day.

What impact did Big Ten rule change have for Ohio State?

The Buckeyes didn’t have final confirmation yet last week when the bracket was set about how many guys it could expect to get back after the Big Ten dropped its 21-day return-to-play protocol down to 17. But there were a handful of key starters who were in that ballpark as potential options to get back on the field, and the next couple days should provide clarity on whether wide receiver Chris Olave or linebacker Baron Browning are on track to be cleared for the Sugar Bowl.

Anybody who tested positive later in the week before the Big Ten championship will remain sidelined for the semifinal, and Ohio State hasn’t revealed any testing specifics about individuals or when the results were posted. So, that’s likely to be a situation that won’t be fully clear until the Buckeyes get on the plane on Thursday — and odds are they won’t reveal an availability report until game day. 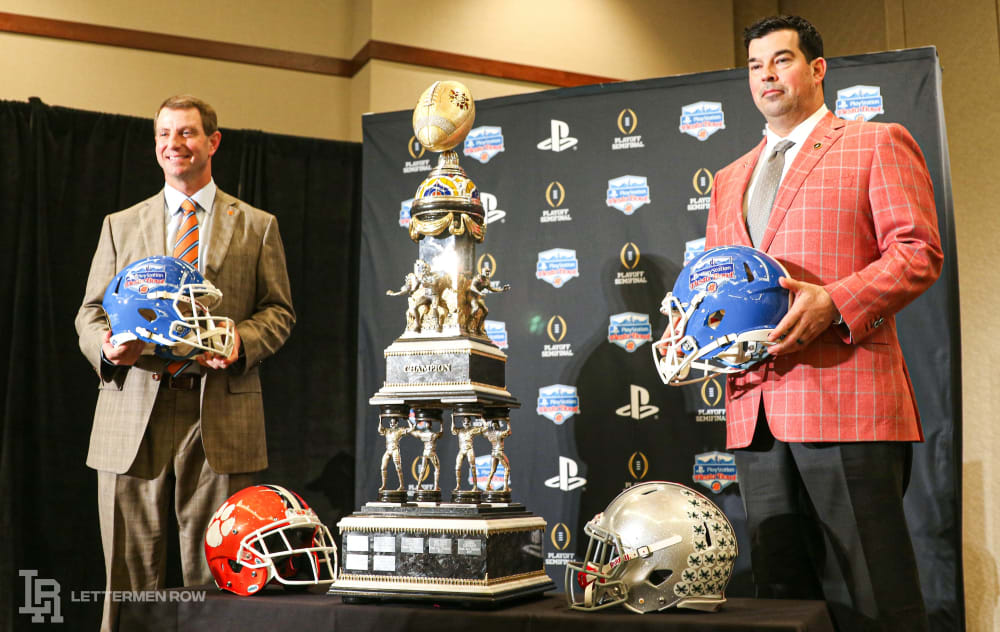 Ohio State and Clemson will meet for the second-straight year in the College Football Playoff. (Birm/Lettermen Row)

Will Dabo Swinney keep running his mouth about Buckeyes?

There’s really no doubt that Dabo Swinney will keep adding more fuel to the Ohio State fire. The Clemson coach simply can’t seem to help himself, even if his arguments make no sense or directly contradict his previous statements. Quick question: If the amount of games matters, why is he convinced that Trevor Lawrence should win the Heisman Trophy over guys who played more and made it through entire seasons elsewhere? Defending his own program is absolutely fine, and it’s what Swinney should do — but while ignoring logic in the process, he’s revealing himself as somebody who doesn’t even believe half the stuff that comes out of his mouth.

So, the obvious answer here is that Swinney will undoubtedly continue to provide more bulletin-board material for the Buckeyes. The only mystery is exactly how he’ll do it and how quickly Ohio State can make copies of his comments to hang in the Woody Hayes Athletic Center.

What will Trey Sermon do for Ohio State encore?

The Buckeyes got the Trey Sermon they were always expecting at just the right moment. Now the graduate transfer has a chance to go make even more history — and perhaps follow a similar blueprint that carried the program to its last national championship.

Ezekiel Elliott’s postseason rampage on the ground in 2014 was legendary, and the Buckeyes wouldn’t have won the inaugural playoff without his singular brilliance at tailback. Sermon is actually ahead of that legendary pace now after shattering the program’s single-game rushing record in the Big Ten title game. And the way he’s running through contact, picking the right holes and gathering speed down the field adds yet another dimension to an already-explosive offense. The Buckeyes had issues last year against Clemson once J.K. Dobbins got banged up because Master Teague was largely ineffective off the bench. So with Sermon now solidly leading the way for Ohio State, he could be the X-factor in the chase for a championship.

Who will step up when Ohio State needs it most?

The Buckeyes had two relatively unlikely heroes in the Big Ten title game with Trey Sermon and Justin Hilliard stealing the show. And while both will surely be factors against Clemson, winning a national championship always seems to require getting contributions from the role players. Think: Steve Miller in Ohio State’s last Sugar Bowl appearance with his stunning interception return in the upset over Alabama.

So, who will step up and execute at the highest level when the Buckeyes need it the most? Nobody would have ever predicted Miller, which makes this kind of a fool’s errand to project. But the area where Ohio State is clearly going to be tested and needs somebody to deliver is in the secondary. Maybe this will be the moment where Josh Proctor truly elevates to stardom, or perhaps Sevyn Banks produces some lockdown magic at cornerback. For the Buckeyes to find that best version of themselves this year, they’re going to need the defensive backs to make an impact.