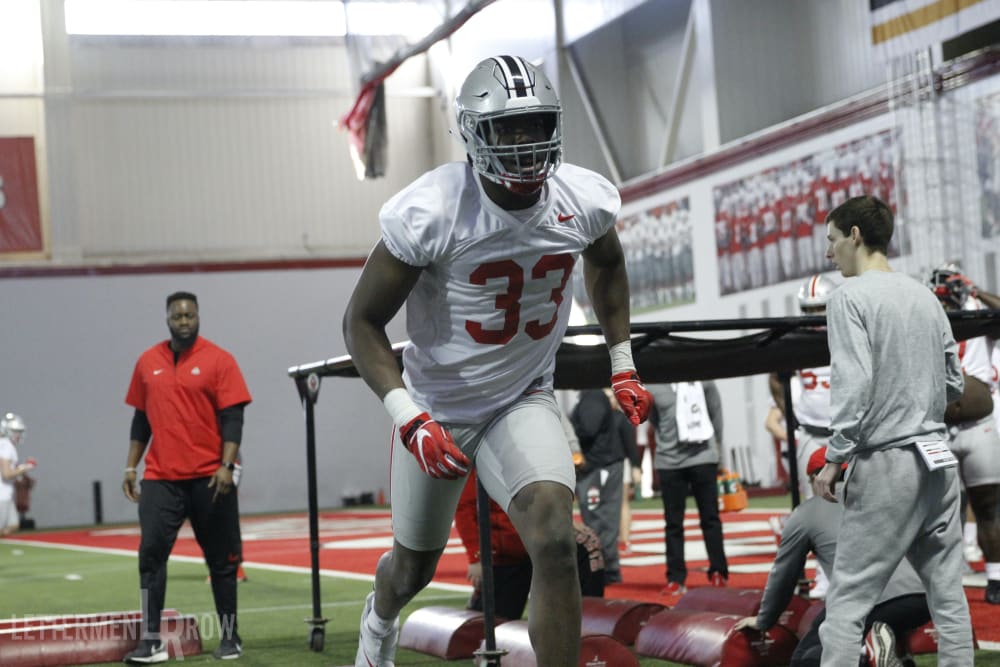 The speculation, debate and conversations about Ohio State never end, and Lettermen Row is always ready to dive into the discussions. All week long, senior writer Austin Ward will field topics on Ryan Day and the Buckeyes submitted by readers and break down anything that’s on the minds of the Best Damn Fans in the Land. Have a question that needs to be tackled, like the one today about breakout Buckeyes? Send it in right here — and check back daily for the answers.

Outside of players that we already have some what of a set expectation for, who has been the biggest eye opener thus far in practice? The guy that has made you check roster sheets asking, "Wow! Who is number…?"

The reminders came repeatedly from Ryan Day when the first workout of spring wrapped up on Wednesday morning.

Consider all that noted for the Buckeyes, but that doesn’t mean any flashes of athleticism should be ignored — particularly since the program has been stockpiling some of the best recruits in the nation, suggesting those glimpses could really lead to something by the fall.

So, which Buckeyes caught the most attention during that opening workout at the Woody Hayes Athletic Center? Here are some Lettermen Row picks.

This might not truly qualify as an under-the-radar pick, but it’s definitely eye-opening to see somebody with the size of Zach Harrison move as naturally as he did during drills with the Rushmen. It takes more than just pure physical ability to thrive on the defensive line for Larry Johnson, but even without pads on, Harrison looks like one of the most imposing players on the field and a potential star for the Buckeyes. It’s too early to know for sure just how much he’ll contribute right away before he’s actually hit anybody in a practice, but Harrison certainly generated a double-take or two during the open portion of practice. 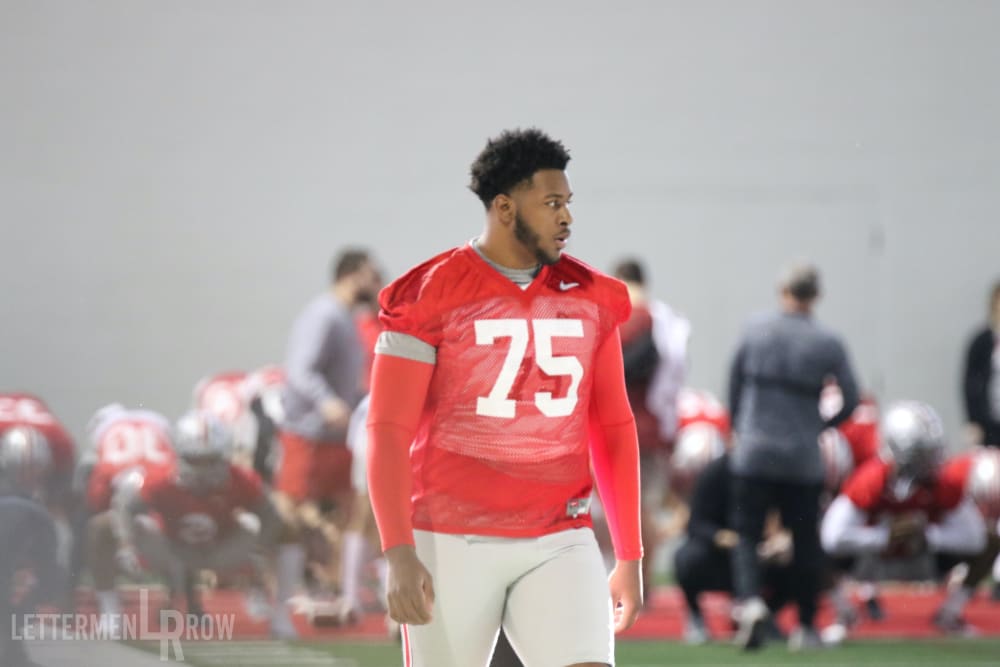 As Thayer Munford recovers from injury, Ohio State will be looking closely at the rest of the offensive line. (Birm/Lettermen Row)

Occasionally it feels like Branden Bowen is something of a forgotten man after dealing with significant leg injuries during the last two seasons. But the veteran offensive linemen is healthy, looks confident and made a point to lead the unit in drills as he ran across the field to set the tone for the Buckeyes. Bowen’s previous starting experience came at guard, which also might contribute to why competitors for playing time like Joshua Alabi or Nicholas Petit-Frere tend to get more attention as candidates to start at right tackle. But make no mistake: Bowen is going to be a factor for Ohio State one way or another.

The sophomore is another player who was already tabbed as a guy to watch heading into camp giving his recruiting reputation, the work he did on special teams last year and the need for improvement at linebacker. But Teradja Mitchell is still going to have to go out and earn that playing time as an inside linebacker with veterans like Tuf Borland around — although he looks more than capable of making that push. Mitchell is primarily known as a hard-hitting force in the middle, and he hasn’t had a chance to do that yet in pads as Ohio State just gets the ball rolling. But he’s another guy who looks to have maximized the offseason program and is hard to miss on the practice field.

The explosive offensive weapon wasn’t ready to be unleashed last season, so Jaelen Gill just developed in the background for Ohio State. It looks, though, like he was doing some fine work preparing for the moment when Parris Campbell was gone and more touches might be available for him. Gill isn’t a finished product at this point and almost certainly won’t be relied on as a starter with K.J. Hill around, but he’s got the potential to be a game-changing threat for the Buckeyes. After his one-handed catch on Wednesday, he’s definitely turning heads.

Ohio State: Contact-loving Marcus Crowley ready for spring camp push
Ohio State: J.K. Dobbins gearing up to be ‘The Back’ for Buckeyes
Advertisement