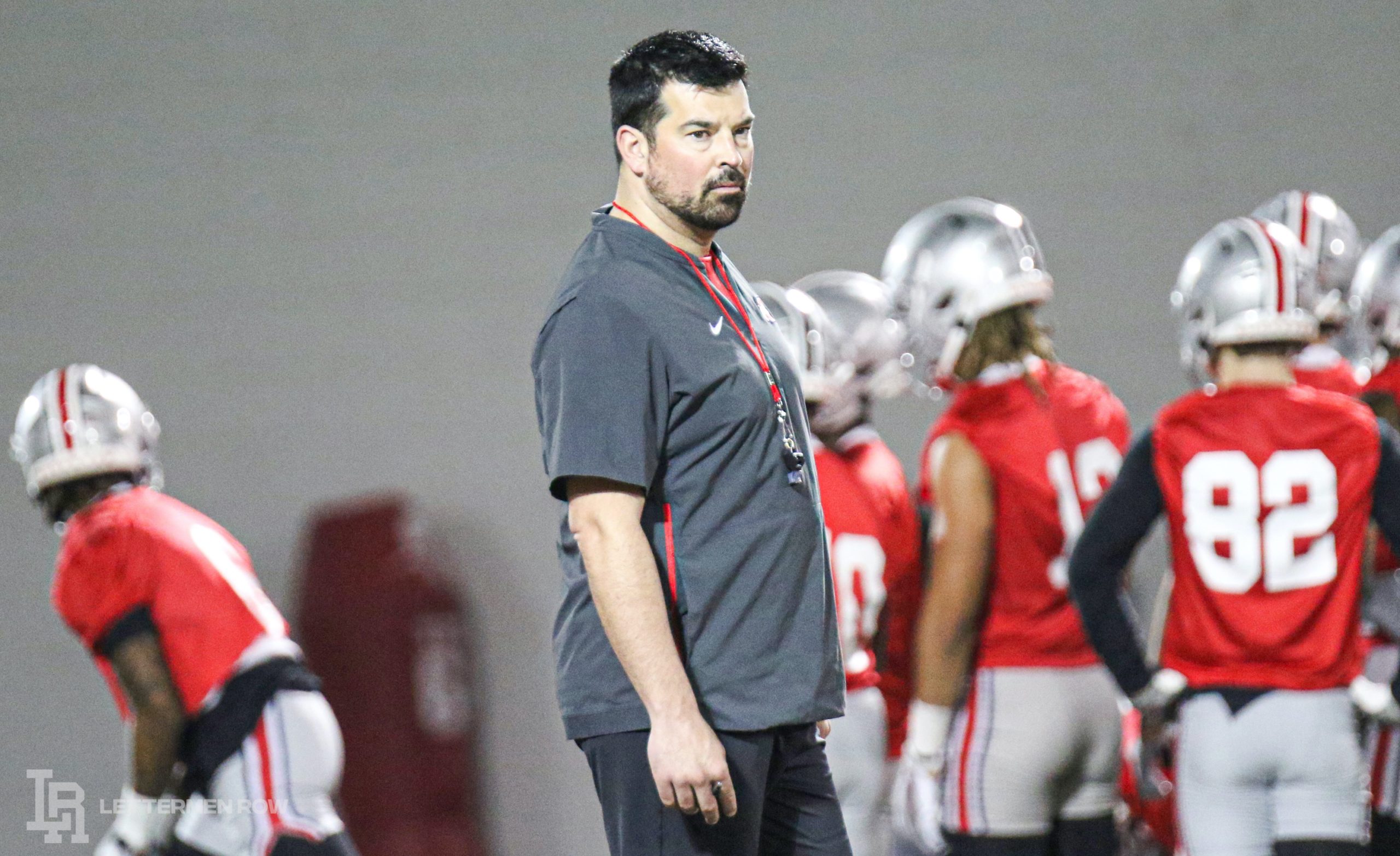 COLUMBUS — The work is only just beginning at Ohio State.

There were no pads on when the Buckeyes hit the practice field. There is no game plan being installed. And a large handful of expected contributors were sidelined by various injuries.

So, Ryan Day was understandably urging some caution about what Ohio State put on display during an open practice to kick off spring camp on Monday morning at the Woody Hayes Athletic Center. But it was still pretty easy to see the potential with another loaded roster for the three-time defending Big Ten champions, and the expectations are clearly going to remain high as the Buckeyes start gearing up for another run at the College Football Playoff.

The first workout is just a starting point for Ohio State, of course. But thanks to Day’s gracious invitation to allow the media to watch the opening practice, Lettermen Row was able to observe a few notable developments about his team — and let’s start with these notes. 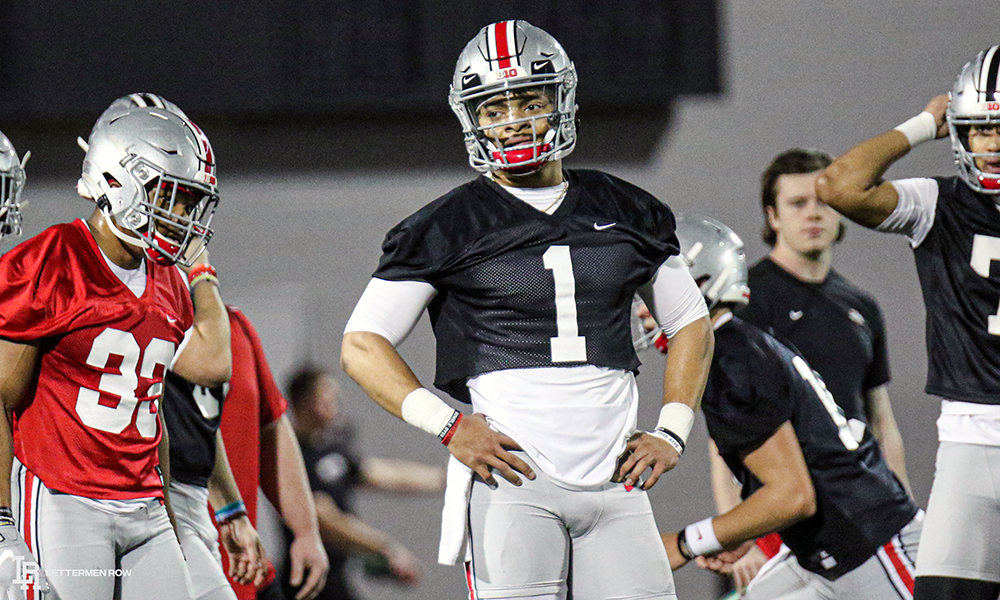 Justin Fields has come so far in one year with Buckeyes

The spring debut at this time a year ago included a few jaw-dropping glimpses at his athleticism, but they were also countered a bit by obvious struggles with accuracy and moments of confusion with the offense. Obviously those were distant memories when Fields was in New York as a Heisman Trophy finalist, but Monday morning was a chance to really see just how far the junior quarterback has come in just one year with the program. It’s also a reminder of just how dangerous he could become for the Buckeyes now that he’s fully comfortable, bursting with confidence, in complete command of the position — and not wearing a knee brace anymore. Fields wasn’t perfect in his return to the practice field by any stretch of the imagination, and nobody is supposed to be as the rust gets knocked off on Day One. But something special is brewing with Fields, and it’s impossible to ignore.

The Fab Foursome of new Ohio State wide receivers all had moments that showed why that decorated signing class arrived on campus with so much hype. But the spotlight seemed to belong to Jaxon Smith-Njigba at least in their first practice together with the Buckeyes, with the newcomer grabbing a few impressive deep throws, catching balls in traffic and seemingly picking up right where he left off as a record-setting target in Texas. Position coach Brian Hartline will no doubt be quick to point out a dozen areas of improvement for Smith-Njigba that weren’t immediately clear to the untrained eye, but there was no mistaking the potential for him as a playmaker — and potential impact player right off the bat. As athletic as all four of those weapons can be for Ohio State, they’ll probably take turns stealing the show in spring ball. But for a first impression, Smith-Njigba was routinely turning heads. 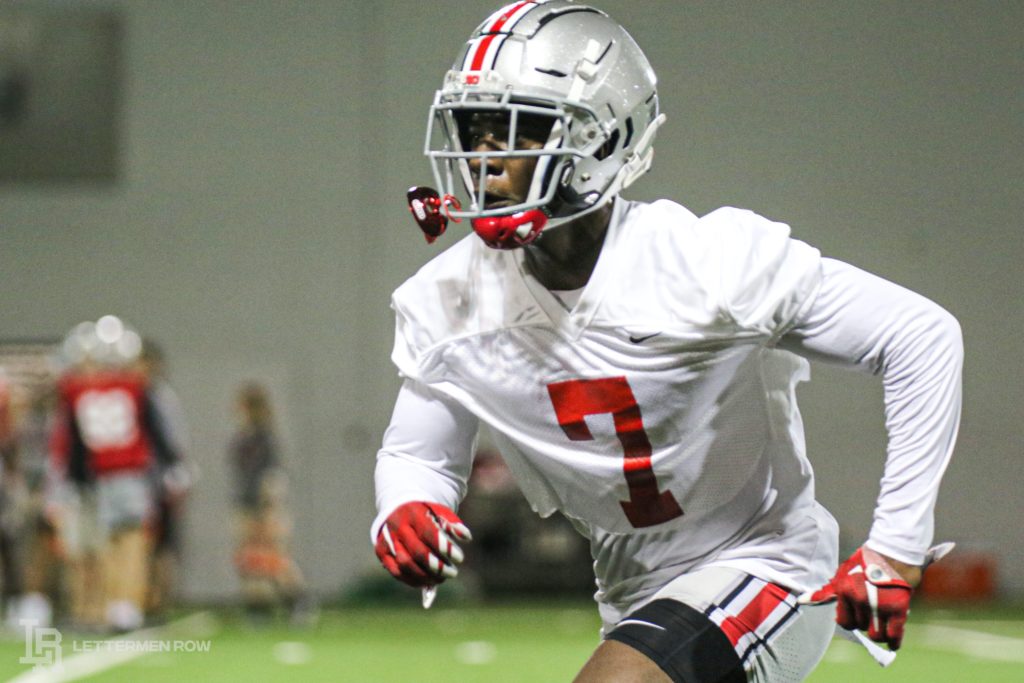 Ohio State cornerback Sevyn Banks could blossom into a starter for the Buckeyes. (Birm/Lettermen Row)

Injuries open up opportunities for Buckeyes

Obviously Ohio State would prefer to let Josh Proctor show that he’s ready to be the full-time safety this spring. It wants Marcus Crowley competing for the starting job at tailback, Baron Browning gearing up for his final season at linebacker and Cameron Brown showing what he can do at cornerback. But spring ball is also a time for rehabilitation after the wear-and-tear of last season, and the Buckeyes are actually only two months removed from their last game. So, that instead leaves some major opportunities for other guys vying for reps and possibly looking to jump into the lineup. Just looking at those couple spots, Sevyn Banks appeared ready to make the leap in the secondary. Justin Hilliard seemed to be moving up in the linebacker rotation and looked fully healthy for the first time in a while. Steele Chambers is getting a long look at tailback, and Marcus Hooker seems poised to make a mark at safety. Ohio State is expected to get everybody currently on the shelf back in time for training camp, but this spring might tighten up the competition.

Tight end move could be perfect fit for Cade Stover

The Buckeyes probably don’t need the immediate help from Cade Stover on offense, but based on just one tiny sample size without pads, the decision to move him over to defense looks like it was a wise move for the future. The decision was surely influenced by the way he’s grown out of linebacker and the fact that playing time at defensive end is going to be hard to come by over the next couple years. There’s also the fact that there’s at least a chance that Ohio State could lose both Luke Farrell and Jeremy Ruckert after next season, which means starting the process of getting Stover comfortable again on offense and potentially ready for a more prominent role in the future is important to get started now. Stover hauled in a number of targets and was moving fluidly and confidently with the football, which shouldn’t come as a surprise for somebody who rushed for nearly 1,500 yards as a high school senior. How much can Stover play at tight end this year? It’s early to project much in that area right now, but that position looks like a natural one for him.