COLUMBUS — Any final-week complacency at Ohio State was shaken away in a hurry.

Just in case the Buckeyes needed any juice to get through the closing stretch of camp, Ryan Day provided the opening act and then let assistant strength coach Niko Palazeti deliver the kind of vocal headlining performance that couldn’t be ignored.

The exact message isn’t safe for all audiences. But it was clearly received by the Buckeyes, who responded to his requests to embrace the hard times in order to enjoy the rewards down the road by swarming around him and then going through six uptempo, open-viewing periods before the media left the Woody Hayes Athletic Center.

“Last week of practice, you’ve gotta go,” Day said at the start of the workout. “There’s no more time for waiting.”

The Buckeyes didn’t waste much effort during Practice No. 12 of camp on Monday morning, the first of the sprint to the finish ahead of Saturday’s Spring Game in the Horseshoe.

Lettermen Row was once again in attendance for the session and left with these takeaways about the Buckeyes from another glimpse at the progress in March and April. 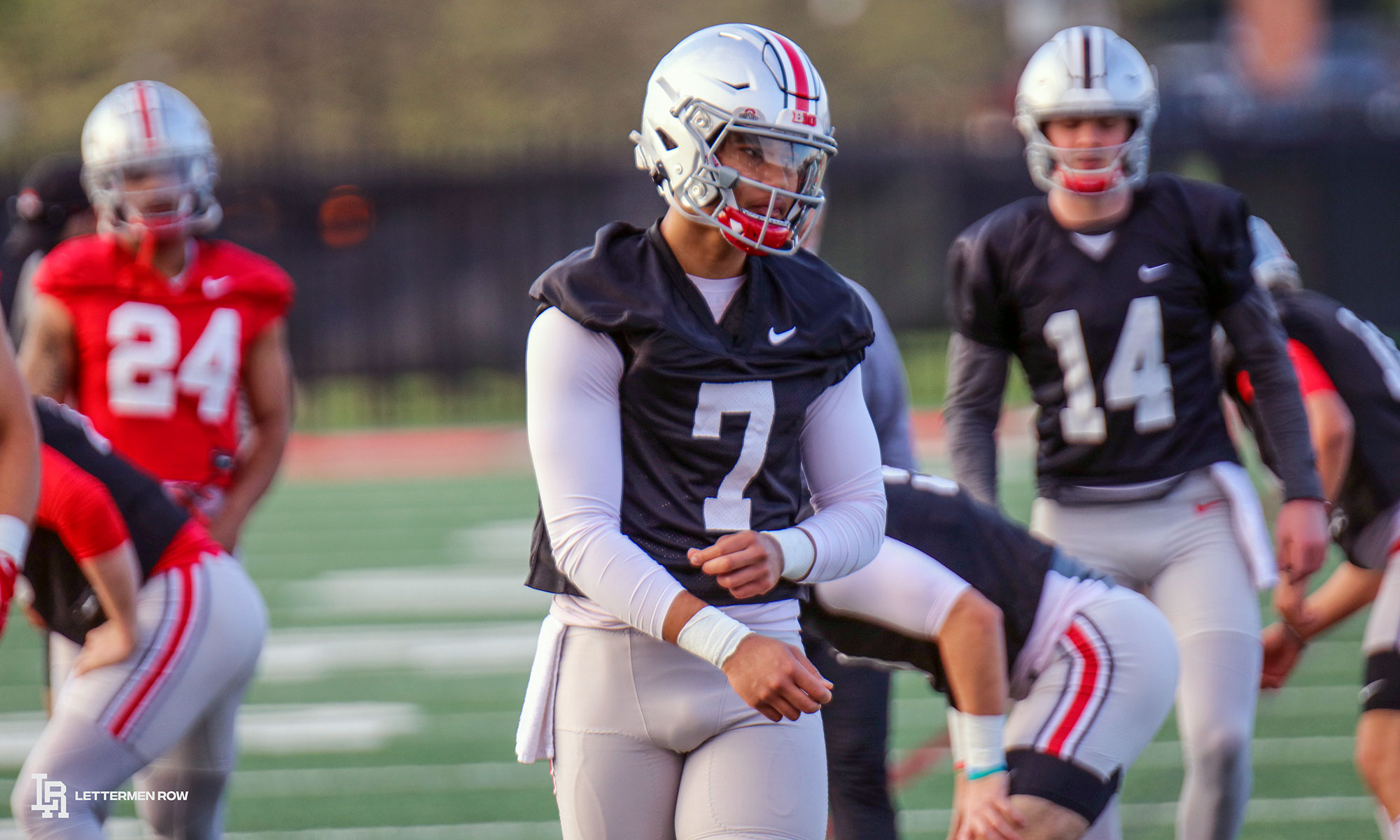 Ohio State quarterback C.J. Stroud has been getting the first snaps. (Birm/Lettermen Row)

Maybe it’s simply a coincidence that C.J. Stroud has been leading the quarterback line and getting virtually all of the first-team reps during the three practices with open-viewing periods this spring. But that certainly seems unlikely at this point based on what the Buckeyes have shown and the feedback from inside the program heading into the final few workouts of camp.

Jack Miller did get the first crack at some red-zone throws on Monday morning, and he threw the ball with accuracy and velocity during that session. Certainly the Arizona native has all the physical tools needed to lead the Buckeyes at the most important position on the field as well, but it certainly seems clear that Stroud has maintained the edge throughout the practices thus far. The sample size is still small, but in some select cases Stroud was getting two or three more reps per drill than Miller or early enrollee Kyle McCord. And while Ryan Day is still in no hurry whatsoever to name a starting quarterback, all signs continue to point to Stroud.

The Buckeyes had a short-term opportunity available at right tackle, and the way they chose to fill it on Monday morning was a mild surprise. With Nicholas Petit-Frere held out of practice, Ohio State didn’t slide Paris Johnson to the edge as might have been expected — instead leaving him at guard and allowing Dawand Jones to take the first-team reps at tackle.

Would Ohio State do the same thing if it was playing a real game this weekend? Maybe, maybe not. For now, it’s a sign that Day and offensive line coach Greg Studrawa like what Johnson is giving them on the interior and that they didn’t want to shake that up as he gets comfortable in what will almost certainly be his only season at guard. And it’s an indication that Dawand Jones continues to be a meaningful part of the depth and flexibility for the Buckeyes with his enormous frame and continued development into a championship-level blocker. Petit-Frere will be back soon enough, but his absence for even just one day offered another peek at how the depth chart is shaking out up front. 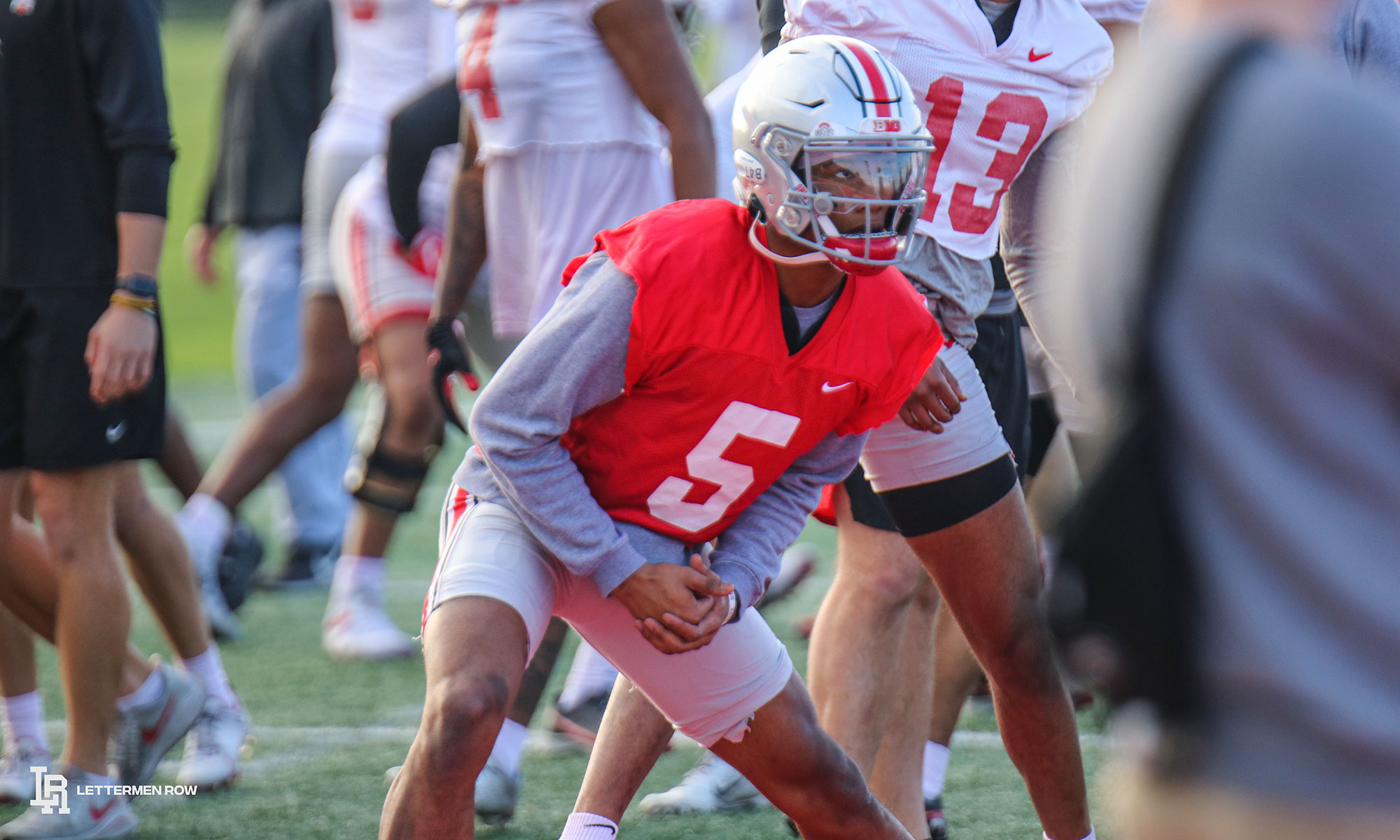 Ohio State wide receiver Garrett Wilson is only getting better for the Buckeyes. (Birm/Lettermen Row)

In some ways, the quarterback decision for the Buckeyes almost doesn’t make that much difference. As long as the guy is throwing to Garrett Wilson and Chris Olave, the degree of difficulty should be lowered dramatically for a first-time starter — particularly given how easy those two targets make it look to get open.

Olave has been slowed a bit due to illness over the last couple weeks, but the senior was on the field and making the kind of impact he has for the Buckeyes for years now. And while Wilson obviously took a big jump last year, he’s looking more than ready for superstardom at wide receiver ahead of what will surely be his last season at Ohio State. The junior had his name called a couple times early for red-zone touchdowns, and his sharp route-running made him an absolute handful for the defensive backs trying to slow him down on the practice field. It definitely helps that the Buckeyes are picking between three elite options at quarterback — but all of them will be in position to succeed because of the targets at their disposal.

No defensive end at Ohio State who elects to put on the No. 97 jersey is afraid of the spotlight, so the confidence of Noah Potter has never been in question. But physically it has taken a couple years for him to start looking like one of the Bosa Brothers by filling out that uniform, and that’s where the redshirt sophomore appears to have made the biggest change now that he’s had a couple offseasons to develop in the weight room.

Bulking up to around 270 pounds while getting a shot to slide down inside as a pass-rushing threat at the three-technique spot looks like it might be the ideal combination to allow Potter to make an impact. And while there’s a long way to go and a heated competition for playing time with the Rushmen, it’s not hard now to envision another No. 97 factoring into the plans and wreaking some havoc again for the Buckeyes.

Up-and-down inconsistency has always been the last hurdle Tyreke Johnson has needed to clear to earn a role for the Buckeyes. There’s little doubt that the former five-star recruit has the raw ability to be a factor at cornerback, but he’s never been able to put it all together heading into his fourth season with the program. That roller-coaster ride was again apparent even in a limited viewing session, although the upside was more visible than it perhaps has been previously.

Johnson was able to break up a pair of passes in a short span on Monday morning, getting his name echoing on the loud speakers and giving the secondary something to celebrate. That was also balanced out by a couple reps where he was burned deep, although Garrett Wilson is going to do that to just about every defensive back who has to face him this season — so that can perhaps be taken with a grain of salt. The Buckeyes aren’t fully healthy at cornerback right now with both Sevyn Banks and Cameron Brown sidelined, and Johnson has an uphill climb to crack the rotation in August. But he seems to be taking advantage of the reps afforded to him now, and that could be something to monitor heading into training camp.