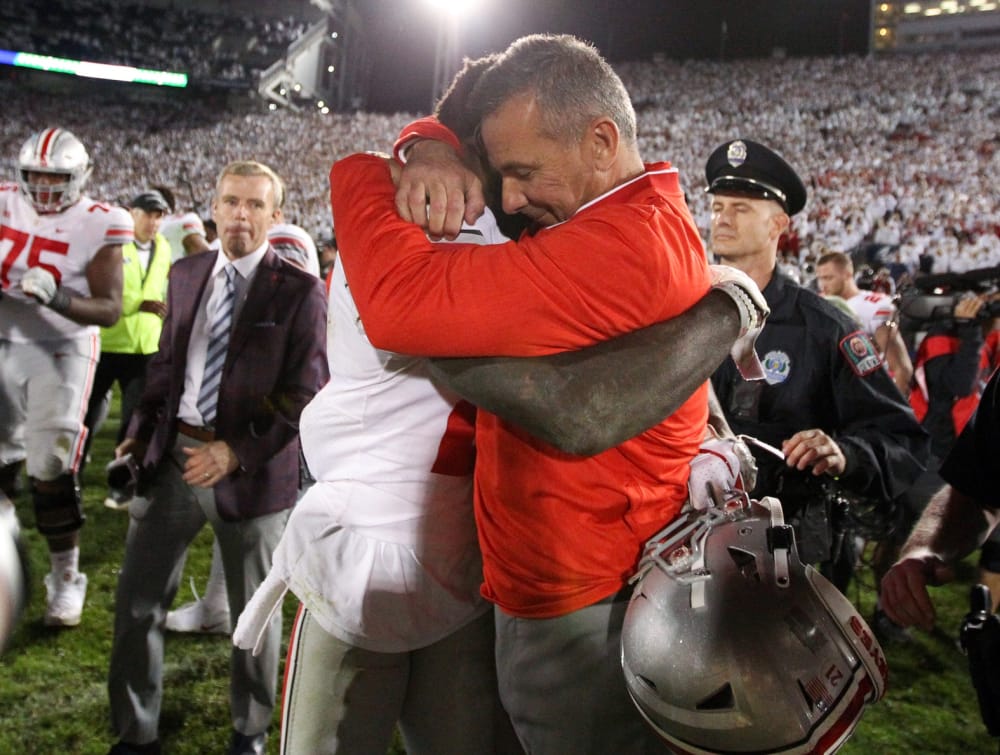 At approximately 11:16 p.m. Saturday night, Ohio State took over at its own 4-yard line, 96 yards’ real estate and a five-point deficit — a pair of towering obstacles.

Four minutes later on the clocks and merely 2 minutes, 32 seconds of game time, Ohio State had its go-ahead, game-winning touchdown and among its biggest regular-season road victories in the past few seasons.

K.J. Hill polished off the eight-play, 96-yard march on third-and-5 from inside the 25. Uncovered in the slot to the right, Hill took the pass from Dwayne Haskins and allowed Austin Mack to seal his block; from there, Hill tight-roped the sideline, juked a PSU defender with ease and coasted into the end zone.

It catapulted Ohio State to the 27-26 win — after the Buckeyes had trailed 26-14 with barely eight minutes left in the top-10 clash.

Haskins found J.K. Dobbins for 35 yards on first down, and Dobbins added a 7-yard run on the next play. After an incomplete pass down the middle, Mike Weber uncorked a nice run and Haskins connected with Parris Campbell for 14.

After two more plays netted just 5 yards, Haskins found Hill to his right for what proved to be the game-winning touchdown.

Held to 96 yards on 30 first-half offensive snaps, the Buckeyes engineered a workmanlike 13-play, 75-yard drive that resulted in J.K. Dobbins’ short dart into the end zone and their first lead, 14-13.

Key on the drive was Dobbins’ inches-long stretch for a first down on fourth-and-1 at the PSU 45. 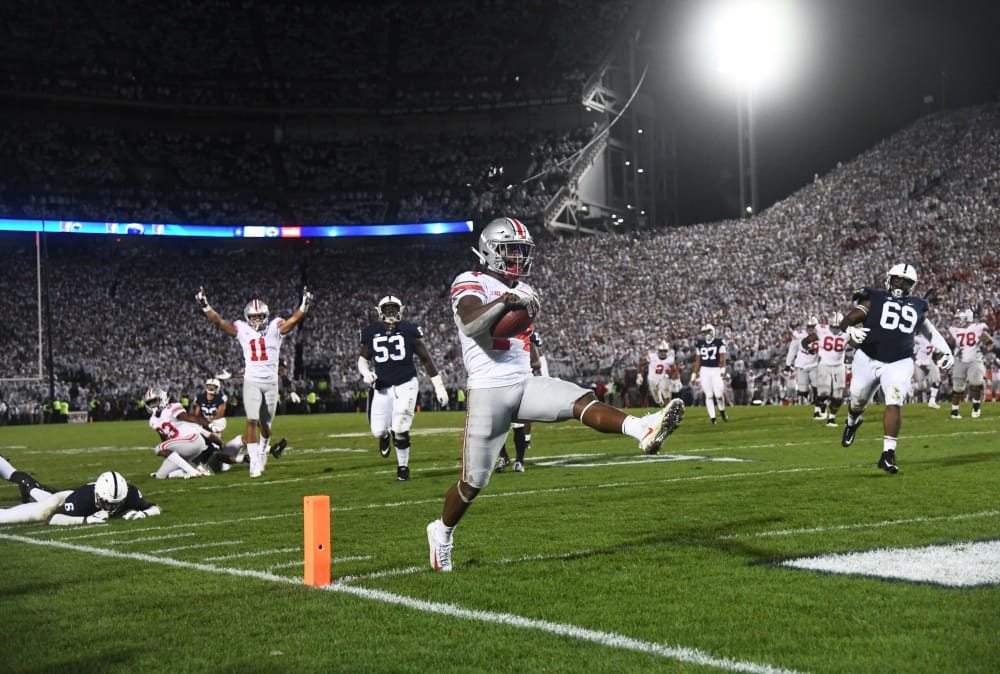 Capitalism At Its Finest

Stymied and completely anemic on offense for 25 minutes, Ohio State didn’t waste the game’s second-biggest play of the first half.

After Tuf Borland forced a fumble, Dre’Mont Jones — yes, the dude who turned around the game to catalyze the TCU victory — pounced on the recovery.

Amidst Sean Nuernberger drilling a 33-yard field goal that would have padded the OSU lead to 17-13, Luke Farrell was flagged for an egregious face-mask penalty around left end.

In falling behind 26-14 in the fourth quarter, the Buckeyes had been flagged eight times for 85 yards in penalties. Then, Chase Young was flagged for a 15-yard face-mask penalty inside six minutes after the Buckeyes had trimmed the deficit to 26-21.

About That Big Play

Ohio State’s defense essentially was perfect through the first half. Except for one glaring exception. Pinned on its own 7, Penn State dialed up a Trace McSorley-to-K.J. Hamler slant, and Hamler raced unscathed 93 yards for the game’s first touchdown and a 13-0 Nittany Lions lead.

The Buckeyes’ defense, forced on the field too much, yielded 293 first-half yards but held PSU to 1-for-10 third-down conversions at the break.

Chase Young knew the stakes and embraced the opportunity to be the Buckeyes’ “Next man up” against the Nittany Lions.

Young had several active plays in the first half, disrupted McSorley more than once and also logged a crucial sack that helped Ohio State steady itself.

The 6-foot-5 Young broke up two passes and logged a pair of quarterback hurries.

The Buckeyes had been a bit unsettled at punt returner, but K.J. Hill — easily in the most hostile environment and the largest-crowd ever at Happy Valley — settled things with a smooth evening catching punts. Though Hill didn’t have any return yards, he commanded a critical element of special teams in a brutal environment.