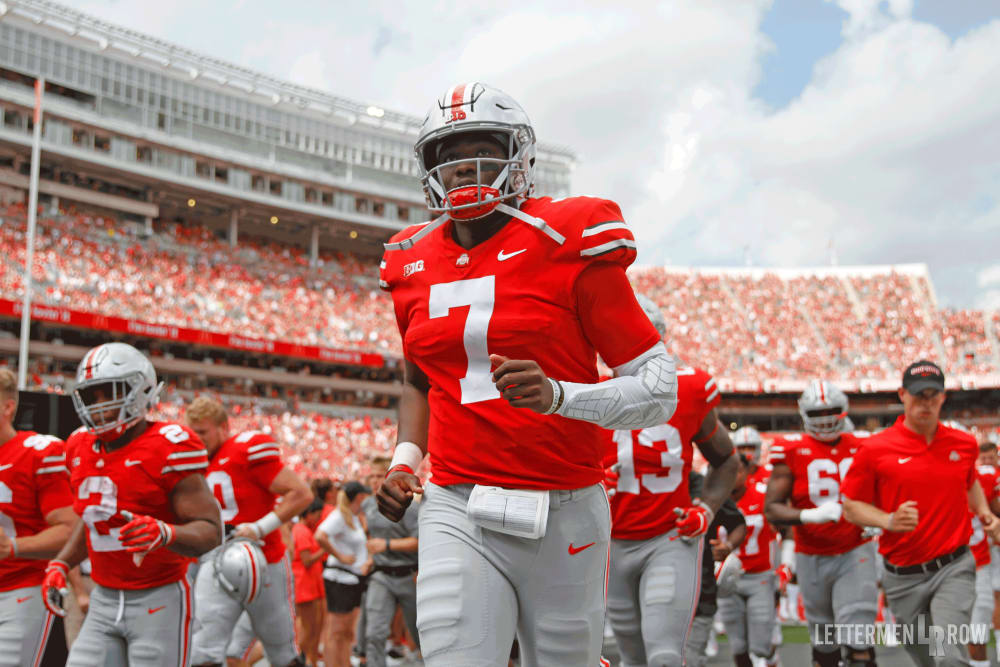 COLUMBUS — The outcome was never in doubt, even before kickoff. Ohio State was more talented, supremely motivated and clearly ready to unleash a bit of frustration.

Oregon State never had a chance, and it didn’t take long for the No. 5 Buckeyes to show why.

Dwayne Haskins was in complete command in his first start at quarterback. Nick Bosa was absolutely dominant on the defensive line. And Ryan Day was cruising to add the first win as a head coach to his resumé after Ohio State jumped out to a 42-14 lead in a tuneup on Saturday at Ohio Stadium.

A weather delay disrupted the party, but considering the mismatch, it’s safe to assume that there aren’t going to be many more lessons to absorb for the Ohio State starters after intermission.

There will be plenty of time to digest it all moving forward. But for now, here are Lettermen Row’s snap judgments on the opener.

Dwayne Haskins is the perfect guy to lead Ohio State

There will be plenty of caveats about the entire performance for Ohio State considering the level of competition. But there were clear signs almost right from the start that the offense for the Buckeyes just has a different feel with Haskins — and it might have a higher ceiling as well. The threat he poses for defenses with his arm strength, confident delivery and accuracy allows Ohio State to touch every part of the field, and aside from expanding the aerial attack, that’s going to open huge holes for tailbacks J.K. Dobbins and Mike Weber on the ground. The Buckeyes set a lot of records with J.T. Barrett running the show, but Haskins might be able to break a bunch of them this year. 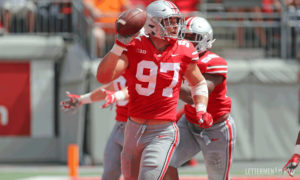 Nick Bosa is still a monster

Look, it’s understandably a long-shot for a defensive player to win the Heisman Trophy. And, again, destroying Oregon State isn’t going to win anybody an award. But Nick Bosa is already looking the part of the potential No. 1 overall draft pick that some are projecting for the next NFL Draft, and the junior is helping his cause to claim individual hardware by banking early statistics. In the first half alone, Bosa racked up four tackles with two sacks, recovered a pair of fumbles and scored a touchdown. Maybe it’s not so crazy to get in a little money on the dark-horse defensive candidate for the Heisman.

Mike Weber is healthy and a handful in Ohio State backfield

The Buckeyes are clearly committed to riding both of its talented tailbacks, and Mike Weber showed exactly why his return can be so meaningful for the offense as a whole. Splitting time with J.K. Dobbins in the backfield, Weber exploded for 96 yards rushing and a pair of scores and tacked on a third touchdown on a short pop-pass from Haskins as part of the fast start for Ohio State. Weber clearly struggled both mentally and physically last year thanks to the hamstring issue that hampered him for most of the season. But he looks to be in fantastic shape, and a full-speed Weber to complement Dobbins is going to be a problem for opposing defenses.

Ohio State gave starting safety Jordan Fuller a chance to test an injured hamstring during pregame warmups, but it eventually elected to play it safe and hold the captain out entirely against Oregon State. That did lead to a couple sloppy plays in the secondary with Jahsen Wint and Isaiah Pryor getting the nod in his place, but it just wasn’t worth the risk for the Buckeyes to push it with no uncertainty about his ability and two weeks to get him back to 100 percent before heading to Texas to take on TCU. That also provided some key reps and learning lessons for Wint and Pryor, who should only get better moving forward.