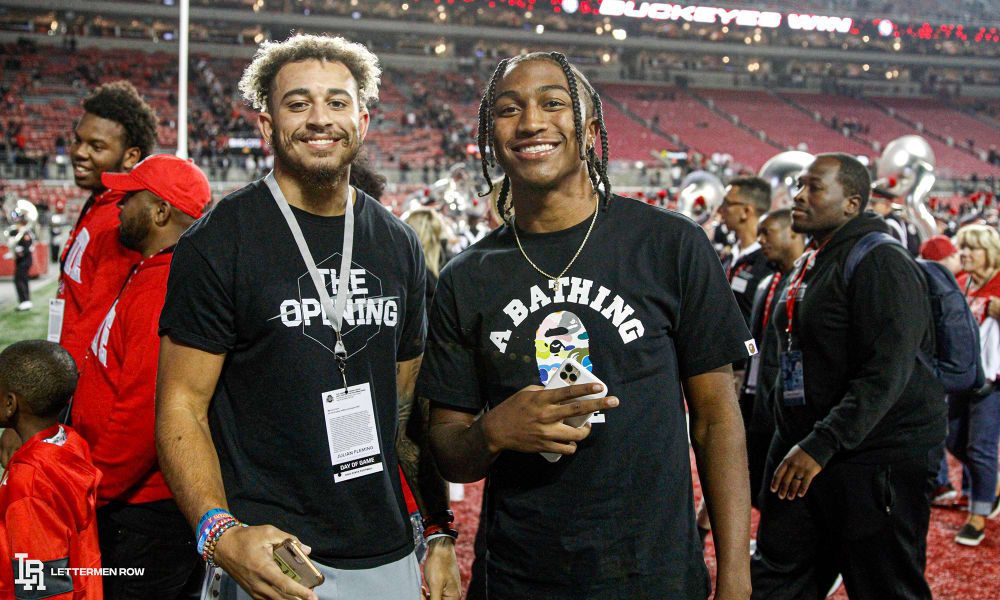 COLUMBUS — The next wave at Ohio State is on the way, and most of it will be arriving in short order.

The Buckeyes aren’t even technically done with the latest signing class and will have a bit of work to do heading into February. But by then, over half of the new freshmen will have been enrolled for a month, going through winter workouts and preparing for their first spring practice with the program.

Now more than ever, football life comes at Ohio State fast. Which is a major reason why there was so much for coach Ryan Day to celebrate after most of the heavy lifting was done for his first full recruiting cycle since taking over the Buckeyes.

“We had a coaching change, we had [co-defensive coordinator Jeff] Hafley leave a week before signing day, and these guys stuck in there. That goes to show you when adversity hits these guys are going to be strong. It’s exciting for our program because it’s our future.”

At least for a moment, that is on pause and the focus will return to the present. As the early signing period comes to a close, the attention now shifts fully back to the Fiesta Bowl and the College Football Playoff for the Buckeyes. But before Lettermen Row heads to Arizona for full coverage, our crew is again ready to make some Bold Predictions, this time projecting the future for the Ohio State signing class for 2020.

Based on potential and recruiting rankings, the four wide receiver signees on the way for Ohio State look like the best group in school history — and Julian Fleming, Gee Scott, Jaxon Scott-Njigba and Mookie Cooper won’t have to wait long to start proving it. With Ohio State watching four seniors head out the door, there is plenty of opportunity waiting for the touted targets walking into the Woody Hayes Athletic Center to replace them next season. Based on how quickly Garrett Wilson was able to unleash his five-star ability under Brian Hartline, and using his five touchdowns as a guide, it should be within reach for the freshmen to get to double-digit scores in a hurry. From that group, the early pick is for Julian Fleming to lead the way with some physical tools that suggest he could follow in the footsteps of Michael Thomas for the Buckeyes. 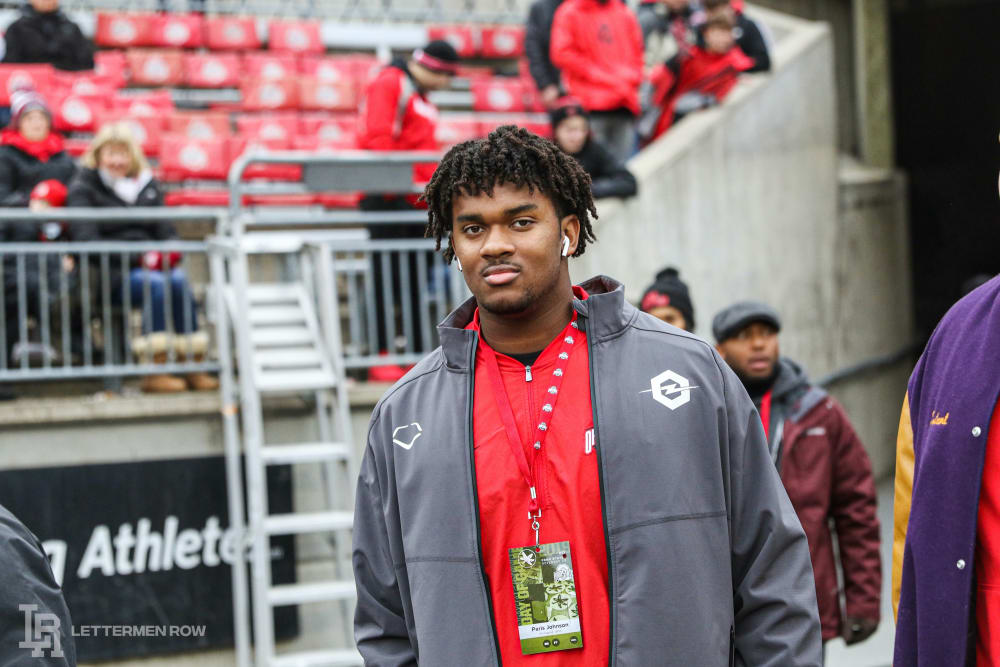 Jeremy Birmingham: Paris Johnson will be No. 1 pick in 2023 draft

At 6-foot-7, Paris Johnson is used to scraping physical ceilings. But he’s not even close to scraping the metaphorical ceiling of his talent. Potential is hard to live up to, and Johnson’s unique blend of size, athleticism and work-ethic will mean crazy expectations on him throughout his Buckeyes career. His calm, confident personality will carry him through the challenges that come with those heightened expectations, though, and he will thrive at Ohio State. With three years of Mickey Marotti and Ohio State developing him, Johnson will become a two-time All-American selection and leave the program as the top pick in the 2023 NFL Draft.

Tim May: Ty Hamilton will be Ohio State game-changer

Based on the way things went for him his senior year in high school, and based on the way his older brother kept progressing as a collegian, defensive end Ty Hamilton seems to have a bright future. The defensive end from Pickerington Central blossomed into a major playmaker for the eventual state champion Tigers this year, and along the way committed to an impressed Ohio State coaching staff. Size wise, at 6-foot-3, 254 pounds, he is no spitting image of his old brother DaVon, who grew into the 6-foot-4, 310-pound, nose-tackle cornerstone of the Ohio State defense this season. Ty brings an aggressiveness from the edge that should be enhanced by a few seasons under the development of position coach Larry Johnson and performance coordinator Mickey Marotti. But one thing he and his brother have in common is that Hamilton no-nonsense stare. 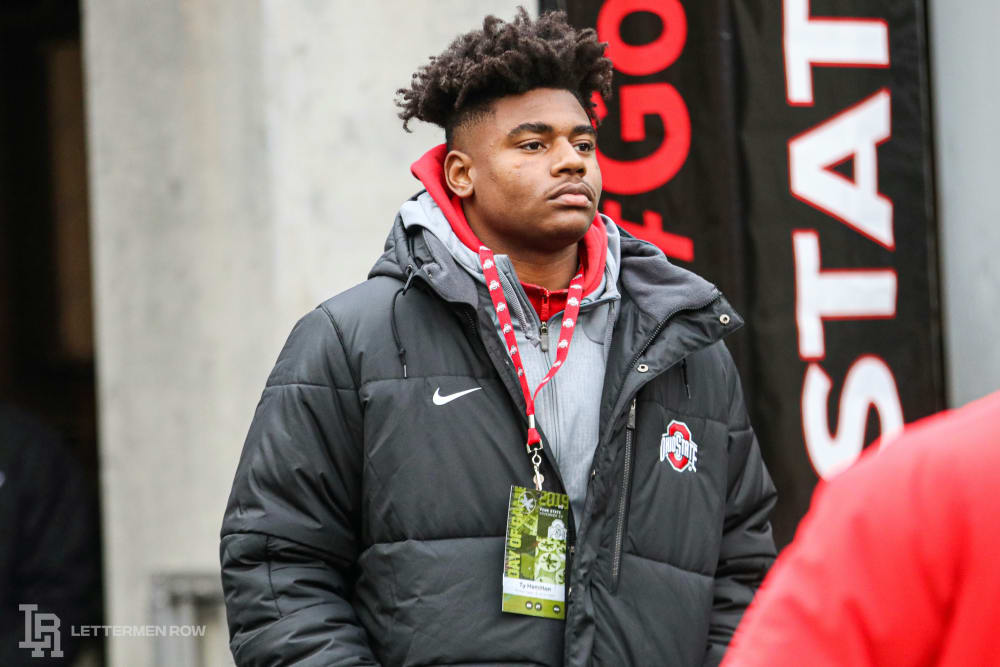 Ty Hamilton will follow in his brother’s footsteps at Ohio State. (Birm/Lettermen Row)

Spencer Holbrook: Lathan Ranson will have tree in Buckeye Grove

Ransom is a super-talented safety from Arizona, and he was a huge get for the Buckeyes. Ryan Day was finally able to speak about him publicly, and he said exactly what I thought he would about Ransom. His 6-foot, 195-pound frame will be perfect for Mickey Marotti to add some weight and become a dominant safety in the Big Ten. Everything Ransom has done in high school can translate, and that’s why he can be an All-America-type player for the Buckeyes, maybe even by 2021. If he has a great first few months of practice, he may see the field early in his career, setting him up for a massive few years in Columbus.

Will Crall: Ty Hamilton picks up where DaVon leaves off at Ohio State

Ty Hamilton will have a very productive career with the Buckeyes, and in the end he will be this cycle’s most underrated recruit. Much like his older brother DaVon, the younger Hamilton isn’t coming to Ohio State with a lot of hype from the recruiting circuit. Despite the relatively low recruiting ranking, Hamilton has had an outstanding high school career for Pickerington Central, a school that churns out high-level talent and just won a state title.

“Larry Johnson saw something in him in camp this year that he really liked and then all of a sudden he had a great year,” Day said on Wednesday. “He was kind of terrorizing every team he played. Played big, played strong, and I think he’s got a chance to be really good.”

DaVon Hamilton has been Ohio State’s best interior defensive lineman this season. His younger brother Ty will carry on the family tradition at Ohio State.