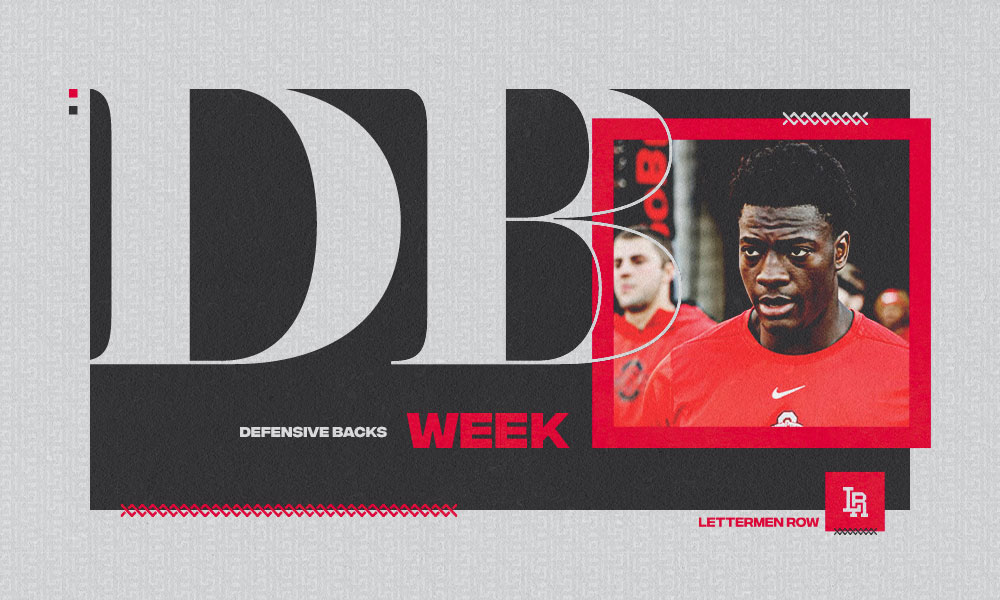 COLUMBUS — Building a dynasty like the one in the Ohio State secondary obviously is a ton of work.

The sky-high expectations have to be met each and every season if the Best in America moniker is going to stick, and that can certainly be a challenge to match when so many defensive backs are heading to the NFL every season. But the Buckeyes have a proven formula of recruiting at a high level, developing that talent into stardom — and then repeating it.

“First of all, because they’re great players, OK?” Coombs said shortly after returning to Ohio State. “I’ve watched them. I recruited a bunch of them. I know who they are. I’ve watched them work out the last couple of days. I’ve watched their tape. These guys got to play a lot of ball last year, which is outstanding, right? The guys who weren’t starters, they get 250, 300 plays a football at high levels and critical games.

“So, I’m excited about that. But I’ve had a good chance to meet with these kids. I know what they’re made of. A lot of them I’ve known from when they were in high school, and I’m very excited about them. Don’t worry about them. We’re going to be just fine.”

How can the Buckeyes continue the rich legacy? As Defensive Backs Week comes to an end at Lettermen Row, let’s dive back into all the BuckIQ episodes for that position since the end of last season as a refresher with training camp looming in less than two weeks.

All signs point to Ohio State stardom for Josh Proctor

What makes Josh Proctor so important to the Ohio State defense? How can the junior safety take the next step for the Buckeyes? Where is the ceiling for a player with his athleticism? Former Ohio State teammate and Los Angeles Rams draft pick Jordan Fuller broke down a couple highlights and answered those questions in this episode of BuckIQ.

What has allowed Sevyn Banks to impress in his limited opportunities so far at Ohio State? How could he fit best in the plans for the Buckeyes moving forward? What are reasonable expectations for him heading into his junior season in the secondary? Former Ohio State standout cornerback Chimdi Chekwa was back in the Lettermen Row film lab breaking down the highlights and answering those questions in this episode of BuckIQ.

Is Shaun Wade ready to be the top cornerback for the Buckeyes? How will his role change for Ohio State in the secondary? What skills will make his transition smooth heading into spring camp? Former teammate Damon Arnette, another cornerback who stuck around for an extra year of development, popped into the Lettermen Row film lab for the first time since his Ohio State career ended to break down Wade and talk about the impact he projects for the B.I.A. unit next season on this episode of BuckIQ.

What can Marcus Hooker bring to Ohio State in the secondary? How can the safety live up to the high standards of the Buckeyes and his famous older brother? Where does Hooker need to improve to take the next step for the program? Former Ohio State captain and Los Angeles Rams draft pick Jordan Fuller broke down some film and answered those questions in this episode of BuckIQ

What made the final season with the Buckeyes such a success for Damon Arnette? How will the cornerback remember his career with Ohio State as he moves on to the NFL? What does he expect as he prepares for the draft? With his career at Ohio State now complete, Damon Arnette joined Lettermen Row in the film lab to break down a few highlights and reflect on his accomplishments with the program in this episode of BuckIQ.