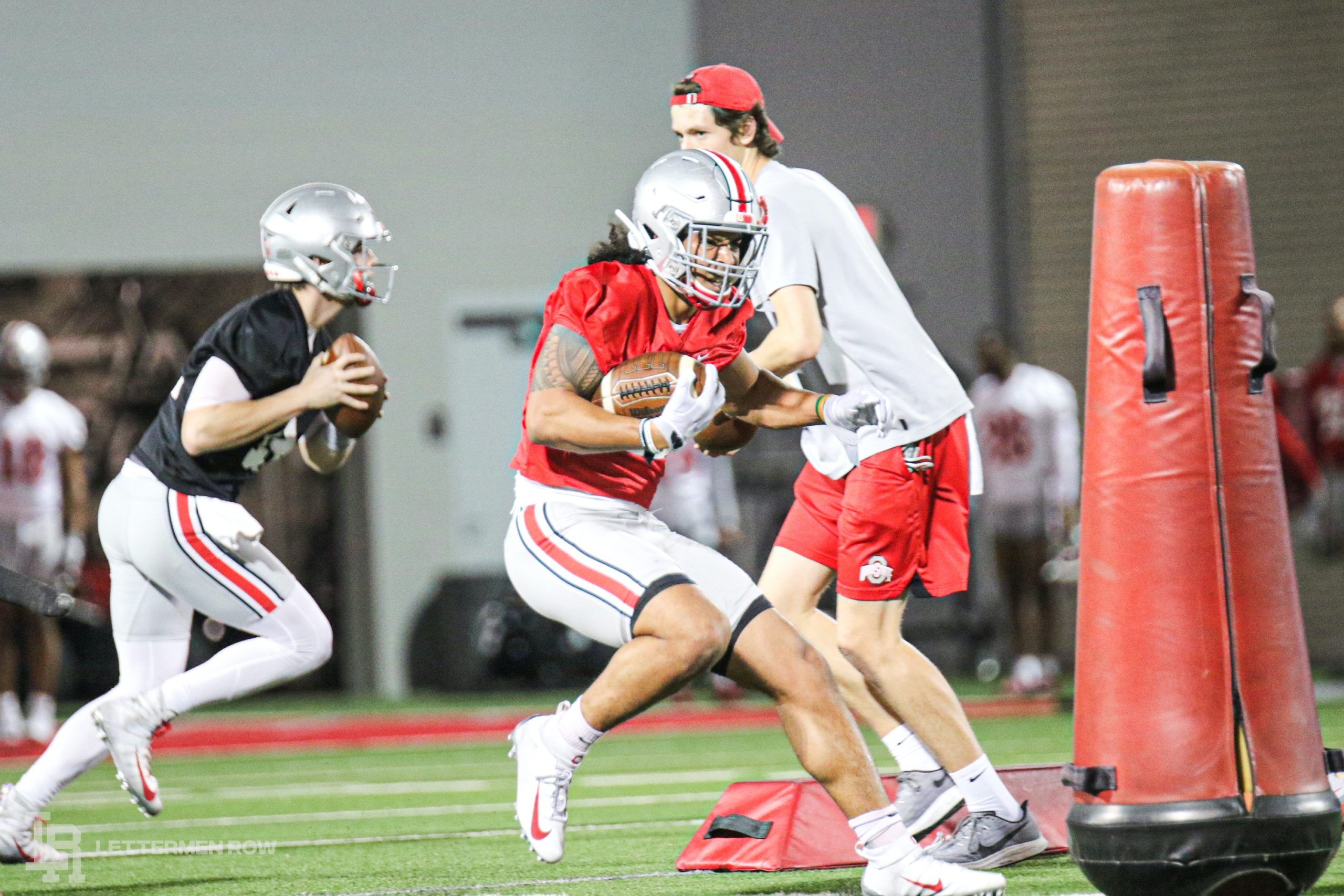 Ohio State running back Steele Chambers is the only healthy scholarship player at the position. (Birm/Lettermen Row)

COLUMBUS — All Ohio State knows for sure is that it will have to get creative with the rushing attack for the rest of spring.

Exactly how much longer beyond that the Buckeyes will be shorthanded remains unclear, but they don’t really have time to worry about that at this point.

Master Teague won’t be back for a while, and multiple sources have confirmed to Lettermen Row that the presumptive starter at tailback tore his Achilles on Monday. Marcus Crowley is still on the shelf recovering from a knee injury, Miyan Williams won’t be on campus until the summer, Demario McCall is still working at wide receiver and J.K. Dobbins is off to the NFL.

That left Steele Chambers as the lone scholarship running back on the practice field on Wednesday morning at the Woody Hayes Athletic Center. But throughout camp, he’s going to get some company — and it might wind up coming from unexpected places.

“What can happen is you worry about a guy getting too many reps and that wear and tear come the third or fourth week at the end of spring ball,” Ohio State offensive coordinator Kevin Wilson said. ” … We’ve got to be crafty. Mitch Rossi is playing tight end and fullback for us, but he’s played some tailback. Demario can play in the slot, he can be the tailback. Back in the day, Jaelen Gill has done some of that.

“The deal is you just don’t need to over-rep Steele, and Marcus is coming off his injury. We’ll end up having three or four back by the time the signee [Miyan Williams] is back, we’ll get guys healthy and get back to a full complement.”

It’s too early for Ohio State to know for sure exactly what timeline Teague is on at this point, though one on the optimistic side would have him targeting early September to get back to work. Nothing definitive has been established right now, so all the Buckeyes can control during spring is managing the reps for the guys who are available.

The same is true at every other position on the roster during spring camp. And after the second workout of March, the tight ends and linebackers met with the media to reflect on the winter workouts and look ahead to the rest of spring. Here’s what Lettermen Row learned from the post-practice conversations.

Al Washington has all the talent he could ever need on hand.

The tough part now for the Ohio State linebackers coach is figuring out what to do with it all.

The Buckeyes have a starter to replace now that Malik Harrison has graduated and is getting ready for the NFL Draft. But a healthy Baron Browning gives Ohio State three experienced guys to build around with Pete Werner and Tuf Borland both back — which is obviously a positive, but does create a situation where it gets tougher to find room for rising stars like Teradja Mitchell or K’Vaughan Pope.

“That’s exactly right, and that’s where we’ve got to do a really good job,” Washington said. “It’s our job to find a way to keep guys engaged, give them roles and give them an opportunity to contribute — because we need it. Just because we have depth … the way I look at it, the first two teams, those are all one.

“So, we do have to do a really good job of trying to create roles and maybe think outside of the conventional defense and put guys in roles so they can do what they do best.”

Kevin Wilson joked that he used to be banned from recruiting Cade Stover because he would fall in love with his potential at tight end.

At the time, Ohio State viewed Stover as a better fit at linebacker or maybe defensive end. But in the end, Wilson got his wish without even really trying, eventually watching the Buckeyes swap Cormontae Hamilton over to the defensive line and getting Stover back to throw around a few tough blocks and potentially become a weapon in the passing attack.

“I think in the long run, it’s a better fit for my body,” Stover said. “Coach Day brought me in and we had an open conversation about it and what’s best, and I’m just looking to get on the field this year anywhere I can.

“It felt really good to get the football again, felt a lot more natural.”

After years of speculating about where Baron Browning fits best, it’s always safer to assume that his versatility will wind up with him getting shuffled around the field. The spring speculation is that he’ll be an outside linebacker, which would make sense with Pete Werner having taken a few reps already in camp on the inside.

But Browning also continues to pop up around drills with defensive ends. His impact as a blitzer and occasional edge rusher is already well known. And with Ohio State trying to nail down specific ways to use guys, the senior remains something of an enigma thanks to his ability to do almost anything at linebacker.

“I think there’s probably just a little more freedom [on the outside],” Browning said. “But either way, I’m just excited to play in that role and be able to contribute to the team. … I guess you’ll just have to wait to find out and see.

Even the tight ends themselves know better than to get carried away during spring camp focusing on the number of targets for the position group.

It’s tradition at Ohio State to spend the offseason predicting a bigger role for those big, athletic guys — only for the season to arrive and again become a relatively small portion of the passing attack. But with Jeremy Ruckert and Luke Farrell both returning with plenty of experience, proven hands and a growing relationship with a returning quarterback, the spring is at least starting off on the right foot for them.

The Buckeyes have only been through two practices so far. But the tight ends as a whole have certainly turned heads with how many passes they’ve been hauling in, which ensures there will again be more hype coming for them by the time training camp rolls around in August.

“I mean, I would like it to happen, because you want to catch the ball when you’re playing at this level,” junior tight end Jeremy Ruckert said. “But whatever the team wants us to do, we’re going to do it — and we know that coming here, we’re going to get the recognition that we deserve. Mainly all we’re trying to do is win.

“In spring ball with the playbook being so open, this is our chance to really show Justin [Fields], show Coach Day and show everybody else how we can really excel in the passing game. I think we’re doing that so far.”