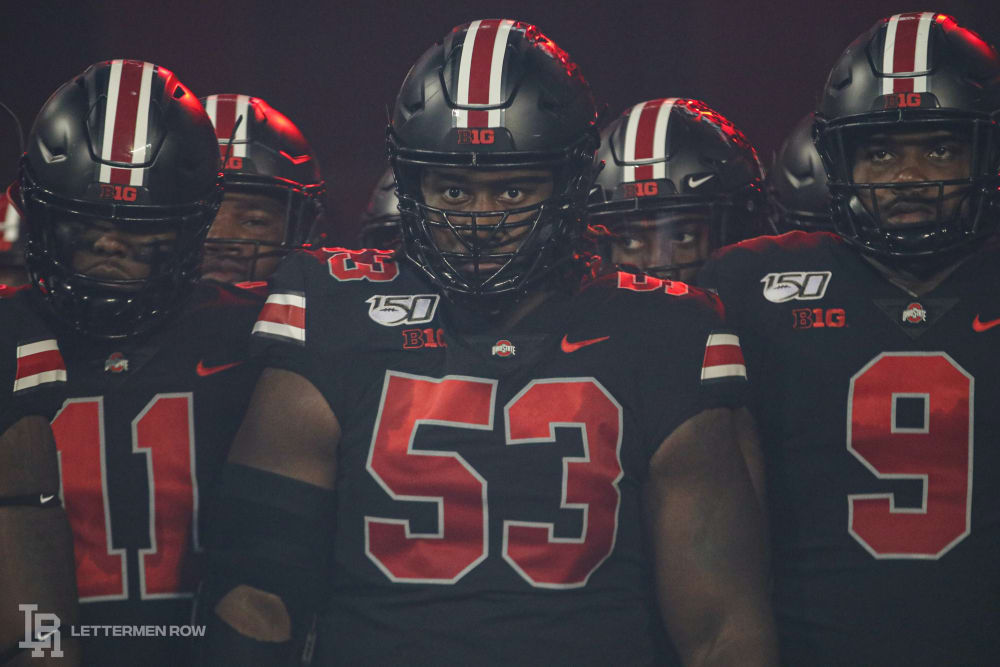 Ohio State and defensive tackle Davon Hamilton are rolling into the season's second half. (Birm/Lettermen Row)

That’s the scary part, because the Buckeyes have already established themselves as one of the best teams in the country during an awe-inspiring six-week stretch to the season. And for those that like to compare such things, Ohio State did it against a schedule that was the toughest any unbeaten team left has faced so far.

The work isn’t done, of course, and the Buckeyes have a handful of challenges left on the regular-season schedule. But right now during the off date, the main competition is winning against complacency.

“I think higher-end execution just in all phases is going to be critical. When you kind of play the way we did in the first five games where it gets a little lopsided, you’re talking about 18-, 19-, 20-year-old kids, when you play a team like Michigan State and you get some of that real resistance right there and some back and forth, you can get their attention and how important execution is going to be and the details.”

The win over those Spartans capped the first half of the season, and it offered a reminder of the upside this Ohio State team has down the stretch. With no game to predict this week, the Lettermen Row crew expanded the weekly projections to the rest of the regular season, and here’s the latest edition of Bold Predictions. 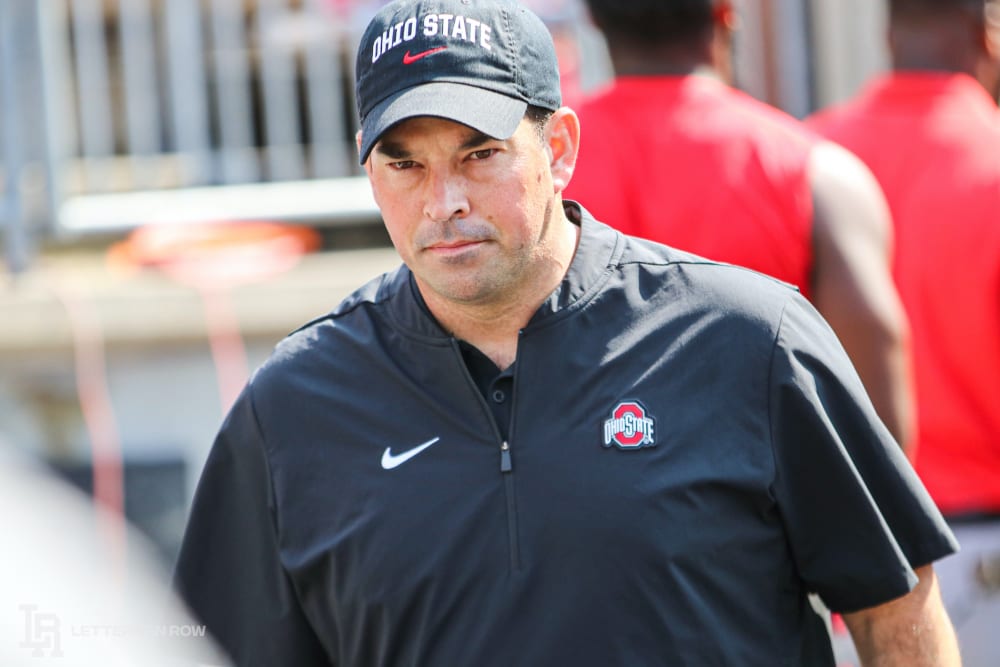 Ohio State coach Ryan Day has the Buckeyes off to a perfect start through six games. (Birm/Lettermen Row)

The clamoring for a test, a measuring stick or a four-quarter battle has almost become a running joke at this point. Even when the Buckeyes welcomed a top-25 team into the Horseshoe last week, they still suffocated Michigan State in a 24-point win that almost felt like it was a letdown for them. That’s what happens when a program is head-and-shoulders better than everybody else in the Big Ten, and even when the schedule gets tougher down the stretch, there really doesn’t appear to be anybody that can challenge Ohio State. Northwestern, Maryland and Rutgers are formalities. Wisconsin doesn’t have enough offensive firepower, and Jonathan Taylor will be bottled up by the Silver Bullets. Penn State and Michigan are the closest competition when it comes to personnel, but those rosters are still outclassed by the Buckeyes. Maybe when the postseason rolls around a real test might emerge — but there won’t be one until then.

I know, I know — it’s a quarterback award. But for the Buckeyes to be where they want to be, it’s going to be J.K. Dobbins who carries the load for the offense on his back and legs. Justin Fields gets a lot of the attention, and deservedly so. But as the weather turns and the Buckeyes prepare for what will be top-10 contests against Wisconsin, Penn State and potentially Michigan, a run to the the College Football Playoff is going to require Dobbins and the offensive line at their best. In our preseason predictions, I projected that Dobbins would become the school’s first 2,000-yard rusher. For him to hit that, the junior tailback will need to average 170 yards per game from now until the Big Ten title game. I think he does it — and runs himself to New York in the process. 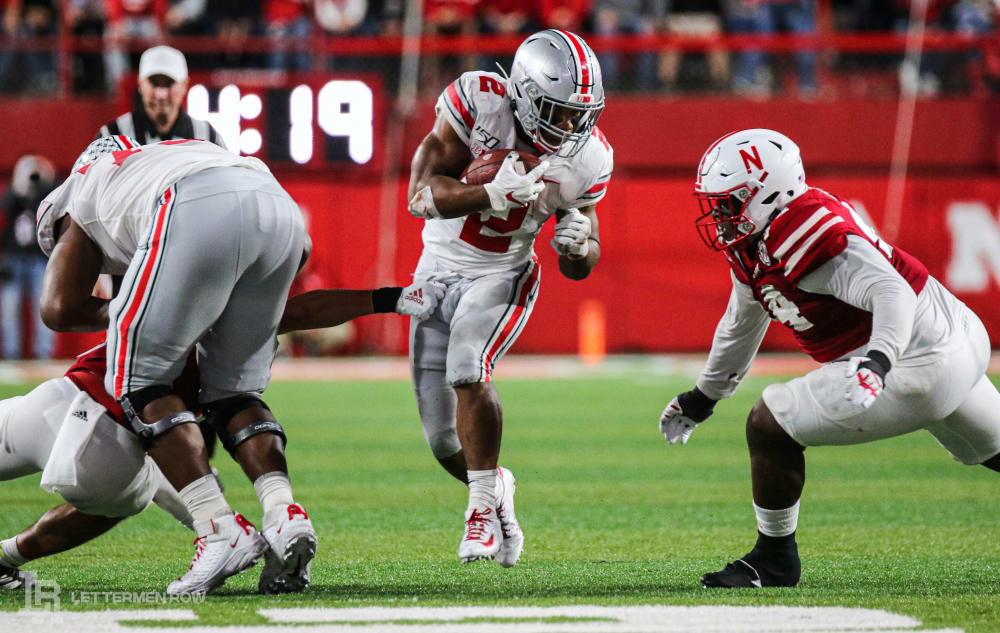 Ohio State running back J.K. Dobbins is once again among the best in the nation at his position. (Birm/Lettermen Row)

As the first six games of the Ohio State season progressed, the running game picked up more and more steam — to the extent that it steamrolled Michigan State’s elite rush defense before pulling into the station for a break. That station could look more like an air base as the Buckeyes leap into the next phase. Northwestern and Wisconsin will gang up to stop the run. Justin Fields will go to launch mode, which brings Garrett Wilson to mind. The freshman wide receiver played more and more, and earlier and earlier, as the first six games ensued. Like Cris Carter in 1984, he’s proven he belongs in the major plan headed forward. That doesn’t mean more catches, necessarily, what with all the capable hands on deck. But he’ll be considered as go-to as any of the others.

In the limited time he has seen already in his debut season, Garrett Wilson has already made the most impressive catch of the season and scored three touchdowns. Again, that’s in a limited role — and as a freshman. If Saturday night against Michigan State was any indication of what’s to come, Wilson’s role in the offense will only expand. He was on the field for crucial first-half drives and could see an uptick in playing time, meaning more targets. If Wilson is progressing like he seems, grabbing four more touchdowns shouldn’t be an issue over the next six games. 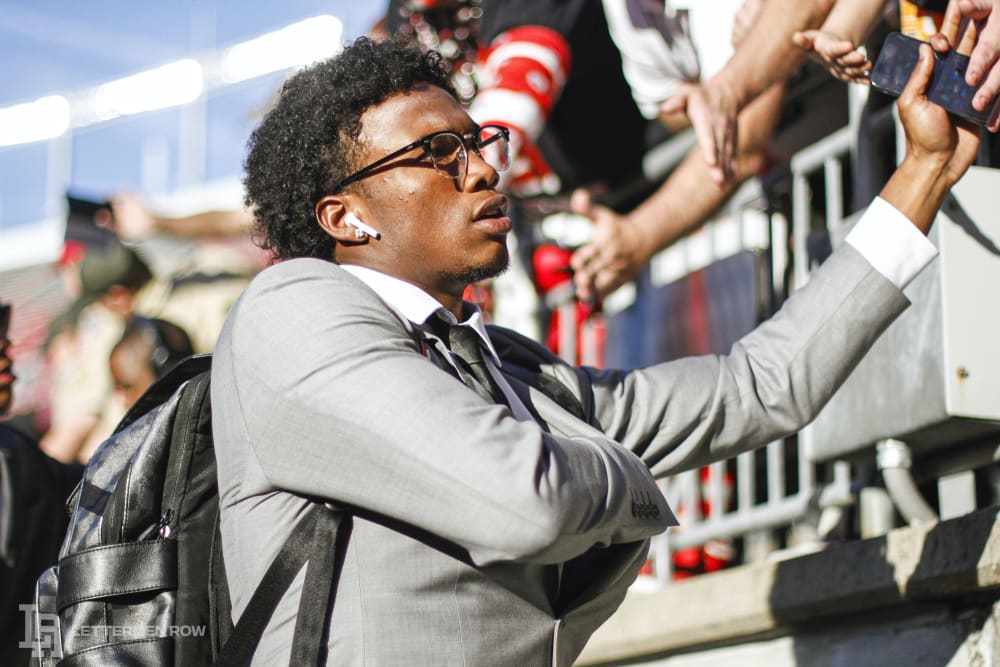 Ohio State wide receiver Garrett Wilson has proven to be a fast learner for the Buckeyes. (Birm/Lettermen Row)

At some point, Ohio State will be in a close game. And when that arrives, count on Chase Young to block an important field goal. It seems like like Young is in the backfield on almost every play — including on special teams. I’m surprised that the nation’s sack leader hasn’t blocked more. Michigan State kicker Matt Couglin pulled a 27-yard field goal wide left early in the third quarter after Young easily ran through the Spartans offensive line and applied pressure from the kicker’s right. Ohio State plays starters on special teams, and it will pay off sometime in the second half of the season when the program needs them the most.