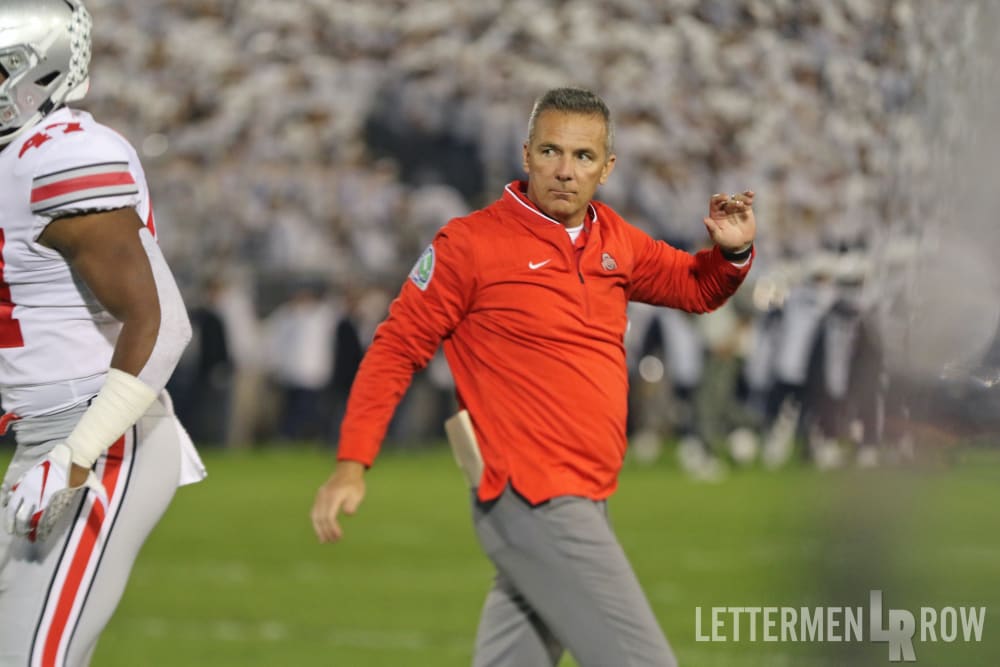 Urban Meyer and Ohio State appear to have a clear path to the College Football Playoff. (Birm/Lettermen Row)

The speculation, debate and conversations about Ohio State never end, and Lettermen Row is always ready to dive into the discussions. All week long, senior writer Austin Ward will field topics on the Buckeyes submitted by readers and break down anything that’s on the minds of the Best Damn Fans in the Land. Have a question that needs to be tackled, like the one today on the schedule ahead for Ohio State? Send it in right here — and check back daily for the answers.

I saw IU on the schedule next and almost puked. They've played us incredibly tough for the last 5 years. Trap game??

The toughest hurdle has been cleared, and the path ahead looks relatively clear as Ohio State barrels ahead toward another Big Ten championship. But as the Buckeyes learned last year, nothing can ever be taken granted in a league that is far more competitive than the version that faced Urban Meyer when he arrived seven seasons ago.

That doesn’t make Indiana a trap game, even if it’s the next matchup coming off the emotional high of staging an epic rally on the road over a top-10 opponent to take pole position in the East Division. Yes, Ohio State wasn’t able to generate enough excitement the following week last year after doing the same thing against Penn State. But thanks to that experience, it’s much more likely that the Buckeyes will be vigilant this week and determined not to let that history repeat itself.

The Hoosiers have also proven to be a pesky foe for Urban Meyer, playing Ohio State much closer than they should given the disparity in the rosters. A big part of the reason for that success, though, was Kevin Wilson — and he’s now in the coaching booth for the Buckeyes. So, given those two facts, this doesn’t feel like the week where there should be any concern about Ohio State tripping up and putting the College Football Playoff in jeopardy.

Where to look then? The feeling heading into the season was that a much-improved Purdue squad and the sleepiness that can accompany a trip to West Lafayette might be a problem for the Buckeyes. And despite some early struggles for the Boilermakers, there’s still enough explosive talent on that offense to potentially give Ohio State some problems if it doesn’t show up ready to play in a couple weeks. Otherwise, it’s really hard to see the Buckeyes encountering any difficulties until Nov. 1o when they head to Michigan State.

Without any marquee opportunities looming for a while, that’s one more reason it was absolutely imperative for Ohio State to claim a victory over the Nittany Lions. There probably wasn’t going to be a way back to the playoff if the Buckeyes had lost last weekend, and now the path is perfectly laid out in front of them with no obvious potholes.