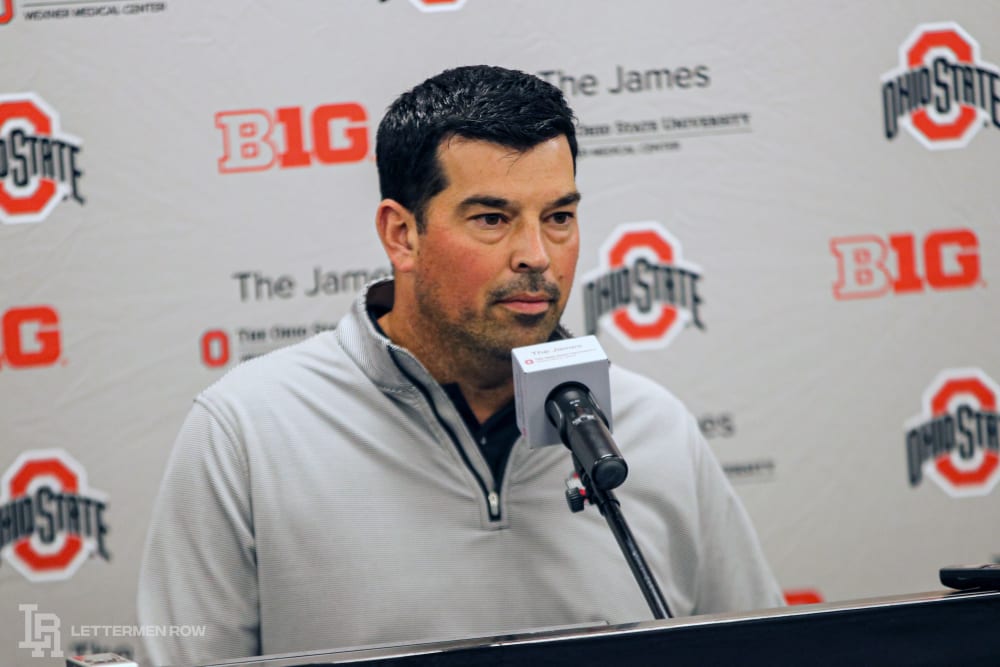 COLUMBUS — Ohio State was prepared for a four-quarter fight in every game so far.

But the Buckeyes are still waiting for the first one to actually arrive.

Ryan Day has watched his team cruise through the opening month of the season without any trouble, piling up blowouts that wound up giving the starters a chance to rest at some point in the second half of every win. Certainly the Ohio State coach doesn’t mind that one bit, of course. But eventually the Buckeyes are going to face some competition that will push them to the final buzzer, which maybe could happen as soon as Saturday on the road against Nebraska.

“I think it’s a good point to bring up,” Day said on Tuesday. We have not played a full game, and in four games, that’s unique. It’s something that we’re going to talk to the guys about, that we have to be able to play 60 minutes and prove that we can play 60 minutes. That has not happened. The good news is we’ve been picking up some depth and we’ve been building depth in these four games and guys have played so that we feel a little better about putting guys in the game when we need to and we can roll guys.

“We haven’t been in the fourth quarter in a game where we’ve had to really grind and work through all that adversity. So, that’s a challenge going on the road, because we will this week.”

The Huskers have already had some struggles early in the season, and on paper they shouldn’t represent the biggest test for the Buckeyes. But Ohio State has had some well-documented slip-ups in the past on the road against West Division opponents, so clearly it’s taking nothing for granted on the practice field right now. That’s one takeaway for Lettermen Row after spending Tuesday in the Woody Hayes Athletic Center for the program’s weekly press conferences.

There have certainly been times where it’s appeared like Justin Fields was fighting against an urge to run the football, whether it was because of a directive from the coaching staff or simply his desire to throw it instead. Either way, the Ohio State quarterback clearly still hasn’t shown off everything he can do physically this season, and at some point it seems likely that his workload as a rusher will increase.

If that’s the game plan, Fields has no problems with it. But he also simply prefers to scramble to throw instead of looking to use his legs, which is one reason his 34 carries through four games might be a smaller total than projected heading into the season.

“They know I want to throw the ball first,” Fields said. “There were probably some times [against Miami] where I could have pulled the ball down and got 10 yards. But I kind of keep my eyes downfield when I’m scrambling to see if anyone is open.

“There really weren’t conversations like that [about not running]. It’s just been that when I do run, make sure I stay safe and make smart decisions, slide, don’t take too many hits. … If Coach Day needs me to run more, I’ll run more. It’s really whatever the team needs from me to win.”

The Buckeyes obviously would have preferred not to test their impressive depth in the secondary, especially by losing somebody with as much experience as Isaiah Pryor. But with the former four-star recruit having fallen somewhat out of favor in the rotation, the impact of losing Pryor might wind up being minimal if Josh Proctor’s apparent wrist injury isn’t serious.

“Well, we think we have pretty good depth there,” Day said. “We have a bunch of guys, and when we went to the Bullet, that kind of opened up some different things for us. And so now you’re looking at you’ve got Jordan [Fuller], you have Josh, and then there’s some other guys there that can also play like Jahsen Wint can play there, Marcus Hooker can play there. We have some different guys that can fill in there, so we feel pretty good about our depth there.”

Rushmen looking to get healthier, stronger

Ohio State has 20 sacks, 44 tackles for loss and 7 forced fumbles in four games. And unfortunately for opponents, the Buckeyes have done all of that without senior Jonathon Cooper playing at all yet this season and with Tyreke Smith and Robert Landers having both missed time due to injuries.

The Buckeyes won’t make a final decision on the availability of those three defensive linemen until later in the week. But all of them appear to at least be getting close to full strength, which is only going to make the pass rush more dangerous for the Rushmen unit.

“I believe the Rushmen can do a lot more,” defensive tackle Jashon Cornell said. “We’ve had guys down, and we really haven’t shown much of the Rushmen yet since we haven’t had all of our guys together. Right now, I think we’re doing a great job with the Next Man Up motto.”

The amount of targets are always going to be spread around at least six wide receivers at Ohio State, which naturally shrinks the number compared to other schools that aren’t nearly as deep. Throw in games that weren’t competitive in the second half and one week where run-blocking became a higher priority for the offense and it’s obvious that the individual statistics aren’t exactly where the Buckeyes might want them across the board for the wideouts.

And if that gets the receivers a little testy, that’s just fine with position coach Brian Hartline — as long as it’s channeled the right way.

“It’s like I tell these guys: It’s OK to get frustrated,” Hartline said. “When guys work their tails off and it’s blood, sweat and tears every day, all season long and they don’t get what they want out of it — we have those conversations. But it’s OK to be frustrated. What you can’t do is let it affect your teammates or your team or your future play.

“Get frustrated. It’s OK. It’s a passionate response, I’m good with that. If you didn’t get frustrated, I almost look at you sideways.”

More chances are almost certainly on the way, though.

And Ohio State hasn’t forgotten about the importance of balance and getting those talented Zone 6 weapons involved.

Full videos from Ohio State’s weekly press conferences are available on the Lettermen Row YouTube channel. Subscribe there for all the latest film breakdowns, analysis and interviews with the Buckeyes..