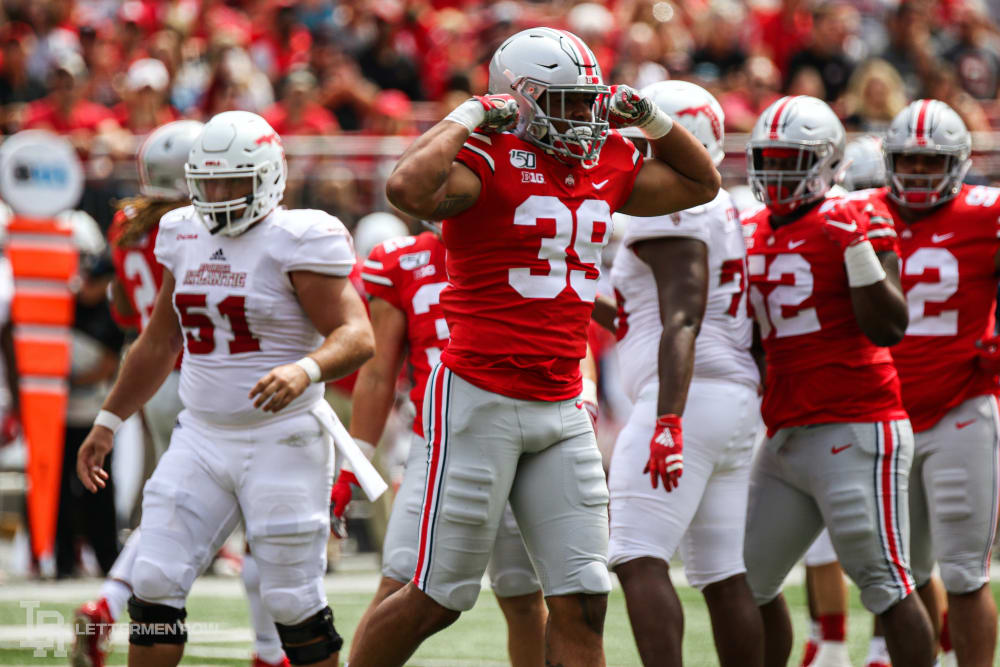 COLUMBUS — Ohio State might have given Ryan Day the perfect present for his full-time coaching debut.

First and foremost, the Buckeyes won and the outcome was never in doubt.

But beyond that, an ultra-talented roster put its championship-level potential on display and provided some positive examples to break down on film in all three phases. But the Buckeyes also balanced that out with a couple quarters of stagnant offense, a bit of drop-off from the backup defense and maybe even a hint of complacency. And all of that will open up chances for Day to go back to the meeting room at the Woody Hayes Athletic Center and deliver his trademark tough love.

Maybe the program wouldn’t have complained about actually following through on the nonstop blowout that was teased in the first quarter on Saturday against Florida Atlantic. But for a coach who constantly searches for teachable moments and growth through failure, Day got exactly what he probably wanted in the 45-21 win at the Horseshoe.

“It’s a start,” Day said. “The good news is we got a lot to learn from in this game, a lot of first-time starters and young guys we can build from — but a lot of confidence to build off, too. A lot of guys made plays in this game.

“You know, I thought we came out to a great start early on. We were kind of clicking on both sides of the ball. Hit a little bit of a lull there, but overall, great start. We wanted to play clean. Watched a lot of football over the last week, and there’s been a lot of teams out there who have not played as clean as they would like. There are a couple things here and there we’ve got to get fixed.” 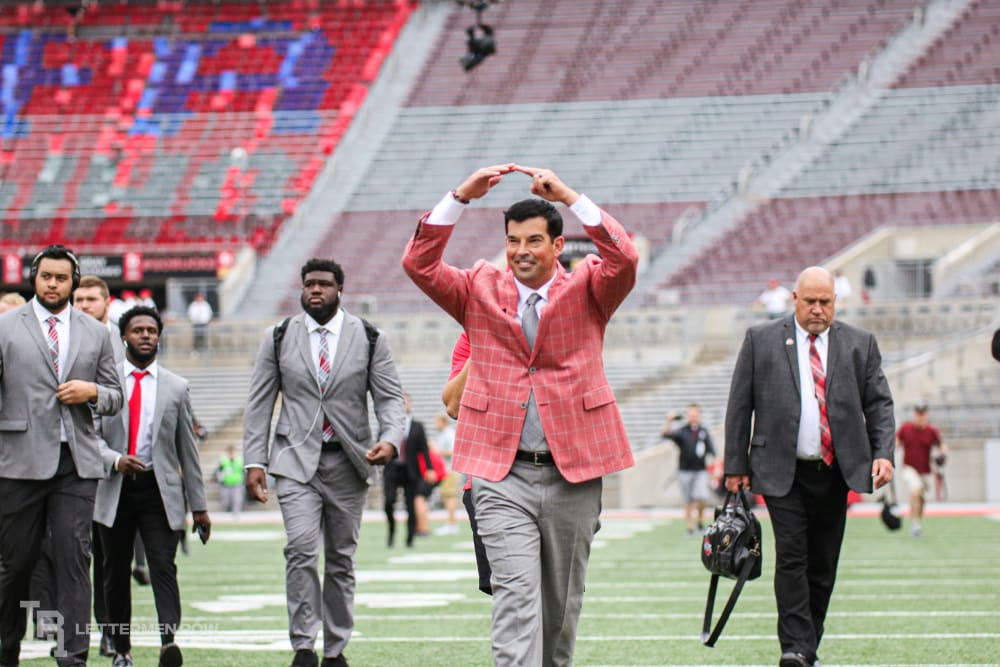 Ohio State coach Ryan Day got what he wanted from the season-opening win for the Buckeyes. (Birm/Lettermen Row)

Given the choice between a flawless opener and a mixed bag, it might seem crazy that Ohio State would go with the latter. Maybe it is since there could be plenty of validation and opportunities to get younger guys reps if the Buckeyes had simply kept dominating the way it did during those nine jaw-dropping minutes to open the season when it steamrolled to a 28-point lead.

Justin Fields was starting a Heisman Trophy campaign and by his own admission was surprised at how easily some of the touchdowns were coming for him. The revamped defense was absolutely suffocating and again living up the Silver Bullets moniker. Even the special teams looked to be rolling early with Demario McCall turning heads as a returner and looking capable of finally giving the Buckeyes a game-changing weapon in that department again.

All of that has to be encouraging for Day, and it’s indicative of the elite potential the Buckeyes have under the first-year coach this season. Honestly, that’s probably what anybody outside of Day’s office should be focusing on instead of the predictable first-game lull that followed. Because once Ohio State starts tapping into that potential consistently from start to finish, the list of teams that can keep pace with it is extremely short.

“Yeah, we jumped on them early,” Fields said. “But we just have got to keep that tempo up and just be able to score all game long. Of course there’s always room to improve, but we just have to keep working as a unit and just keep getting better in all aspects of the game.”

The fact that Ohio State can leave the opener knowing that fact without any doubt is only going to be a benefit in the long run. And that goes double since a much stiffer test is already on deck for Week Two with Cincinnati likely heading up the interstate as a ranked opponent with a familiar, motivated face in charge. 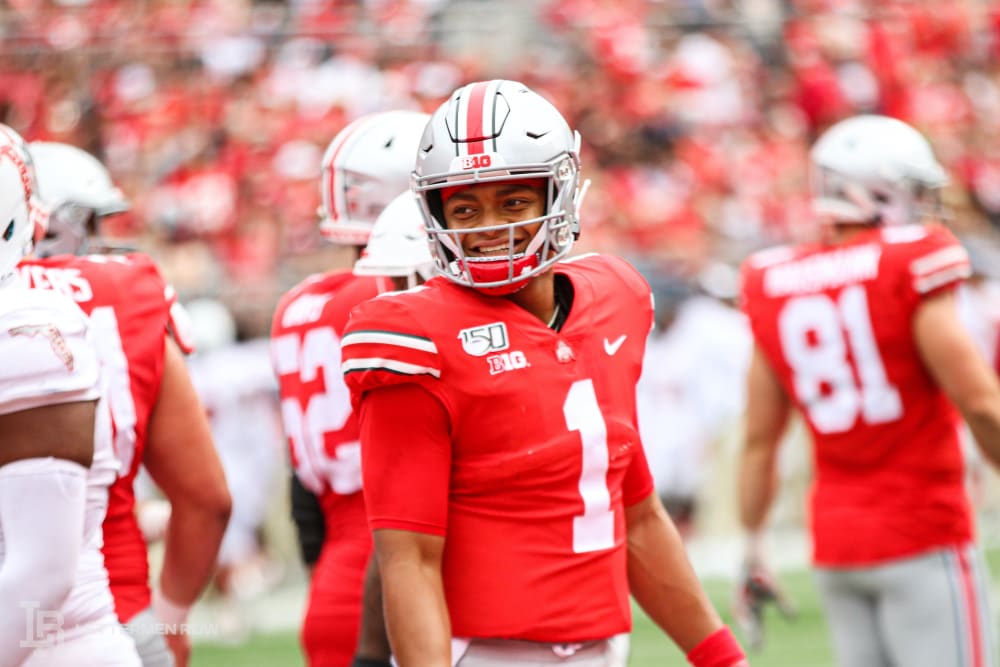 The Bearcats probably aren’t going to be much of a threat to this dramatically improved, aggressive, hard-hitting version of the Silver Bullets. But Luke Fickell and coordinator Marcus Freemen will surely have something special cooked up with a talented defense of their own as they prepare for Fields. And both Fields and Day were clearly aware that the sophomore quarterback is not a finished product even after accounting for five touchdowns in his debut.

“You know, we’ve got a really good team coming in here next week who is well-coached, and you guys know Luke and those guys are going to be prepared,” Day said. “We’ve got our hands full, but there’s a lot to build from but a lot to learn for the young guys, as well.

“I thought [Fields] performed well playing with great energy, making good decisions, but more importantly managing the game, taking care of the ball. That’s the biggest thing. The big plays will come. … Got a long way to go. But for a first start it was well done.”

Nobody for Ohio State was perfect, obviously. And in Week One, they also weren’t supposed to be.

But the Buckeyes did offer a glimpse at what that might look like and how terrifying that will be for opponents. And now Ryan Day gets to head back to the practice field with plenty of reminders of how much work it’s going to take to get there, the perfect gift to give a coach along with his first full-time victory.