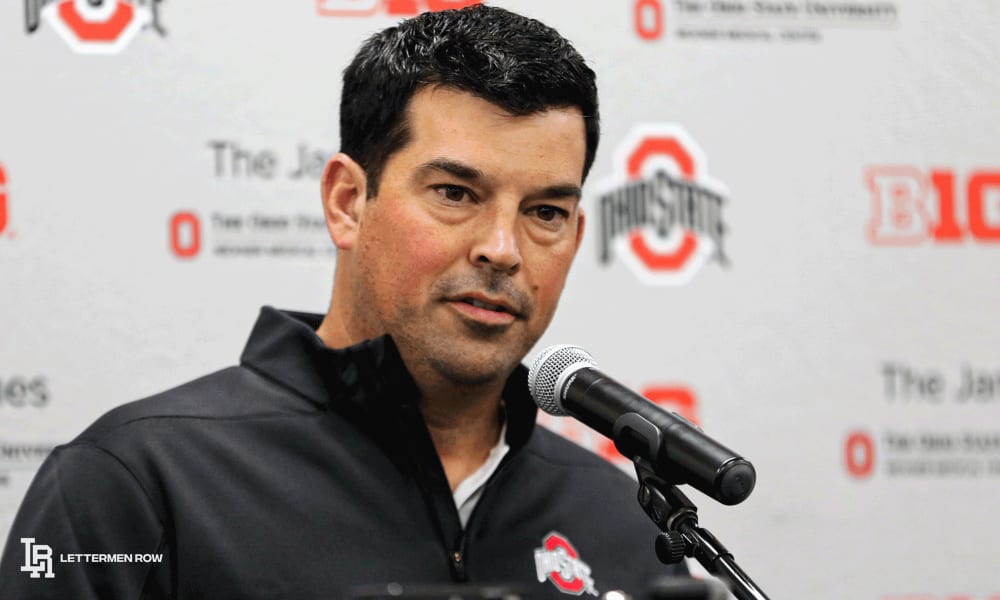 There is some familiarity that certainly helps the first-year coach heading into his official, full-time debut on Saturday at the Horseshoe after serving in an interim role a year ago. Day knows the process, he’s felt the pressure and he’s got a grasp of everything that goes with leading the Buckeyes into a game like the one this weekend against Florida Atlantic.

But that doesn’t mean Day won’t be dealing with some butterflies heading into kickoff — which is good, because he also seems to like them.

“The nerves and anxiety, that’s not going to go away,” Day said on Tuesday at the Woody Hayes Athletic Center. “Understanding what’s at stake every time you step on that field, that’s part of it. Doesn’t matter if I’m Game No. 1 or Game No. 300, it’s always going to be that way because there’s an expectation here. And I get that.

That chance is finally about to arrive for the Buckeyes. And after Day, assistants Kevin Wilson and Jeff Hafley and three players chatted with the media, here’s what Lettermen Row learned as Ohio State gets set to open the season.

Defensive line depth will be tested early for Ohio State

Ryan Day is going to remain extremely tight-lipped when it comes to injuries for Ohio State, but there were certainly indications coming from the program on Tuesday that senior captain Jonathon Cooper isn’t likely to be available to open the season.

How long Cooper’s potential absence will last also remains unclear, but it might become an issue that lingers for a couple weeks for the Buckeyes. Multiple sources have indicated to Lettermen Row that Cooper needed a minor medical procedure and is dealing with a high-ankle sprain, which will provide the first early test of all that depth the program has stockpiled on the defensive line.

“In terms of defensive end? Obviously Chase [Young] is there and Javontae Jean-Baptiste has come along,” Day said. “Zach Harrison will play this year. He’s ready at the beginning of his career, he’s got a huge ceiling and the more he plays the better he’ll get. And you have Tyreke Smith and Tyler Friday as well. Jashon Cornell can go inside or outside.

“Feel decent about the depth there. I think we’re maybe a little deeper inside, but I feel strong.”

The seating chart and sideline passes have been arranged, and Jeff Hafley has his marching orders to head upstairs ahead of kickoff on Saturday.

The Buckeyes held a mock game last week to go over all the final details for the coaching staff, and the co-defensive coordinator and secondary coach will be monitoring and helping call the defense from high above the field. He’s been there before at previous stops and liked it. And Hafley is even more comfortable with the setup since he’s confident in the other assistants and supports staffers who will be down on the sideline to pass along any tips he would otherwise deliver in person.

“I like it up there a lot,” Hafley said. “The game slows down, you can see a lot more. Being up there, you’ve got such a good view of everything, it’s slower, the emotions are kind of out of it, the crowd is kind of out of it — it’s kind of like slow-motion. I feel very comfortable up there.

Defensively, Hafley is expected to be joined by Matt Barnes in the box. Offensive coordinators Kevin Wilson and Mike Yurcich will both be upstairs for Ohio State as well.

The depth chart and availability report for Ohio State won’t be released until Friday, but Day offered a sneak peek at right tackle. And it validated the strong work Branden Bowen has delivered during training camp and officially set the stage for him to cap his arduous comeback with a start at right tackle.

The Buckeyes are still planning for Nicholas Petit-Frere to play a role this season, and he could rotate in for meaningful reps and keep pushing for the job over the next few games. But Bowen’s experience, physical tools and maturity as a fifth-year senior helped set him apart during the competition in August.

“It’s definitely emotional,” Bowen said. “I mean, just seeing the news a few minutes ago, it was hard not to break down and cry. It’s been a long road. [The injury] has definitely been very, very difficult — something I had never even thought about dealing with prior.

On paper, there’s a clear personnel mismatch and a reason why Ohio State is favored by nearly four touchdowns against Florida Atlantic. But Day obviously isn’t taking anything for granted, so he’s not making any plans for when exactly the best time to get new starting quarterback Justin Fields out of the game would be.

That’s a tricky proposition for the Buckeyes, who would ideally love to get some meaningful reps for inexperienced backups Chris Chugunov and Gunnar Hoak as well. It gets more complicated because Fields is also starting for the first time and could surely use extra reps to get comfortable — but Ohio State also can’t afford to have him go down with an injury.

“That being said, he’s got to go play the game. We can’t be walking on eggshells. We can’t go into a game worrying about people getting hurt. Our guys have to do a good job protection wise.”