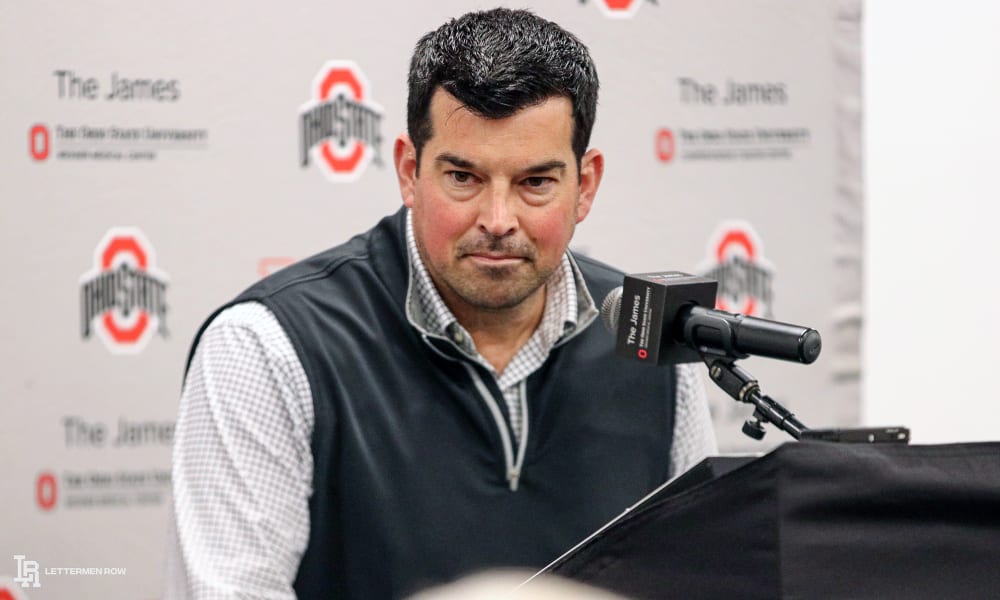 Ohio State coach Ryan Day is starting the process of moving on from the Fiesta Bowl loss. (Birm/Lettermen Row)

COLUMBUS — The sting of the loss will probably never truly go away for Ohio State.

There’s at least some part of Ryan Day that is fine with that even as he tries to turn the page to next season, because those emotions can be channeled into something positive.

But there’s a delicate balance for the Buckeyes in dwelling too much on the Fiesta Bowl, worrying about bad calls that can’t be changed or feeling sorry for themselves after missing out on a national championship. Ohio State has a roster that is more than capable of getting right back to the College Football Playoff, and at some point the overwhelming majority of its attention has to just be on the future.

“I’ve moved on from the anger part of it,” Day said in his first press conference back on campus. “Obviously when you’re a competitor like that, it’s hard to lose in a game of that magnitude — and [when] you feel like you played really, really well.

“But when you’re playing in big games and the margin for error is tiny, that’s what happens. So, yeah, I don’t know if we’ve moved on yet. I don’t think that’s probably the word. But it’s still kind of sitting there. We’re thinking about it a lot. And it’s going to keep motivating us moving forward. But at some point you do have to take the next step.”

The Buckeyes took almost all of them last year in Day’s first season. Another Big Ten title was secured, the rivalry dominance over Michigan continued and Ohio State won 13 games overall, all of which counts as a wildly successful season by almost any measure.

But Ohio State did come up short of a national championship. And now that carrot is already dangling in front of Day and the Buckeyes as they start building for the 2020 campaign — which was just one lesson for Lettermen Row coming out of his conversation on Wednesday at the Woody Hayes Athletic Center. 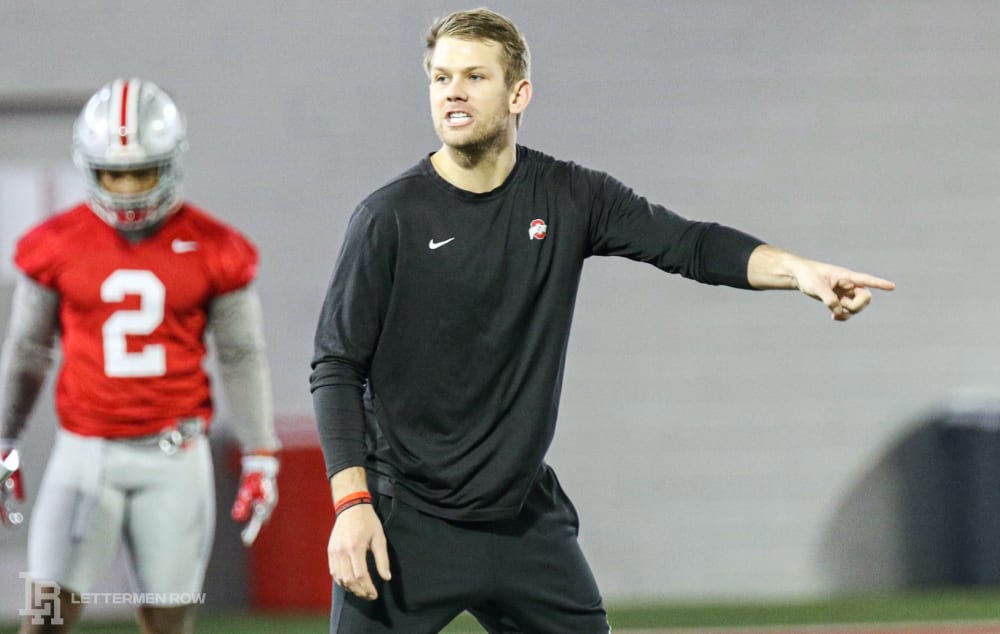 Why Corey Dennis was the guy for Ohio State

Familiarity with the system. Continuity with the coaching staff. Relationships with the quarterbacks on the roster. Bright future in the profession.

Ryan Day could have probably kept going as he went through all of his reasons to promote Corey Dennis and make him the new quarterbacks coach. But those basics sum up what made the fit so natural, and it was probably an inevitability considering how closely those two have worked together essentially from the moment Day arrived at Ohio State from the NFL.

“Since I got here, Corey’s kind of been my right-hand man,” Day said. “And he’s kind of, right from the beginning, from when I got off the plane that first time, we were kind of together. And we’ve spent a lot of time in that meeting room together. And he knows exactly how we teach things. And he’s got a tremendous relationship with the quarterbacks here. He’s done a good job in recruiting and has had a hand in a lot of stuff.

“But I feel great with not only the fact that he can teach the way we teach it, but also we need some continuity in that room. Corey is a young coach who has a really bright future. And I think everything — if you put into Corey you’re going to get back in invest because he’s so bright.”

Ryan Day left his personal opinions out of the public debate, but he did acknowledge that there are already discussions among coaches at the national level about fixing what is clearly a broken system with the controversial targeting rule.

The logic behind it when it comes to player safety is obviously important, and Day certainly has no problems on that front. But as the ejection of Shaun Wade proved in the Fiesta Bowl, the penalty for players who plainly have no intent to injure an opponent or who get tossed for essentially unavoidable hits is proving unfair and far too costly for college athletes.

“I was at the AFCA head coaches meeting [Tuesday],” Day said. “There was some talk about that and trying to make some adjustments. I’ll let [executive director] Todd Berry and those guys talk about some of the things. But I do think that some of those things should be looked at. It’s certainly a difficult thing at times to officiate, as we all know. It’s in there for the right reasons. But there is some gray area there that’s sometimes hard. I totally get that.

“But I definitely think the walk of shame, where the guy, he gets done, he walks off the field. I don’t think that that’s right. And so, again, I’ll let kind of Todd go out there and talk about some of the things we voted on yesterday. But I do think there’s some different things we can look at.” 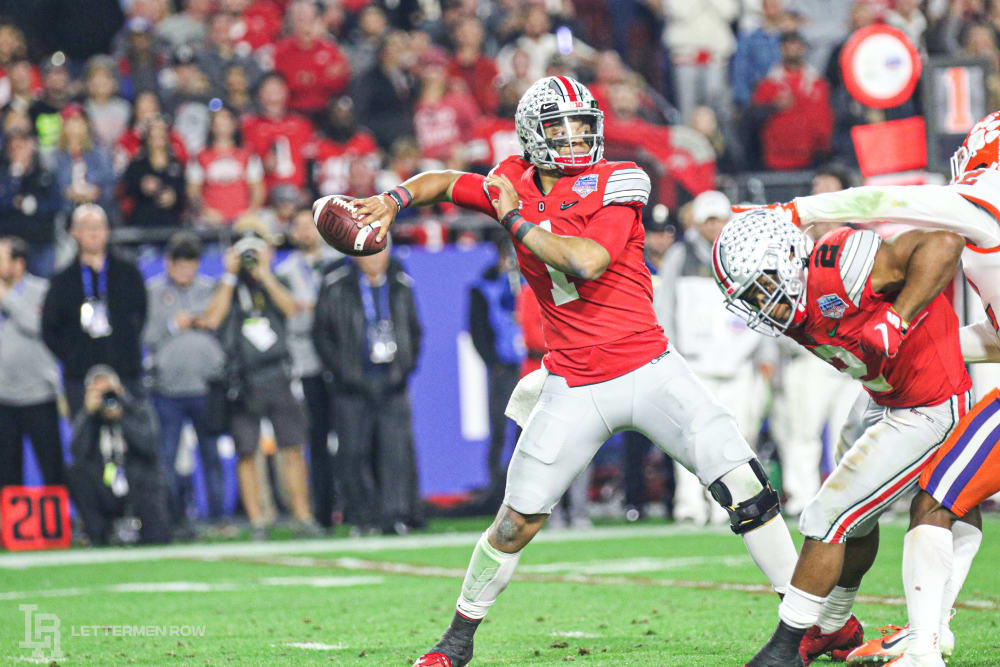 There has been no public indication whether the knee injury that clearly limited Justin Fields late in the season required a medical procedure or simply rest. But either way, Ohio State isn’t expecting there to be any issues moving forward with the Heisman Trophy finalist as he starts preparations for his second year as the starting quarterback.

Day did acknowledge, though, just how much that setback limited Fields after getting hurt late in the win over Penn State, forcing him to tinker with braces, miss a couple practices and continuously rehab for three more high-stakes games after getting hurt.

“Without getting into too many details, it wasn’t something that was catastrophic, but at the same time he wasn’t 100 percent,” Day said. “And there were times this year where he missed practice. And so the whole arsenal of stuff was not there.

“But I’ll tell you what, he’s tough, and he worked through it and he competed and he played hard. And it’s a tribute to how tough he is and his ability to work through things. Really leading into the Big Ten Championship game he really didn’t practice much at all, wasn’t able to do much. … I’m watching the film, he played good against Clemson. He played good. He made some really good throws. Some throws we just missed. And he competed, and really proud of the way he came along this year.”

Ohio State expected to be playing on Monday night, and for the most part the sentiment for the program is that it did enough to be there. But after coming up short, Day didn’t want the rest of his staff or his roster to blow off the broadcast, turning it into a sort of offseason homework assignment with lessons for everybody to absorb — as painful as it might have been.