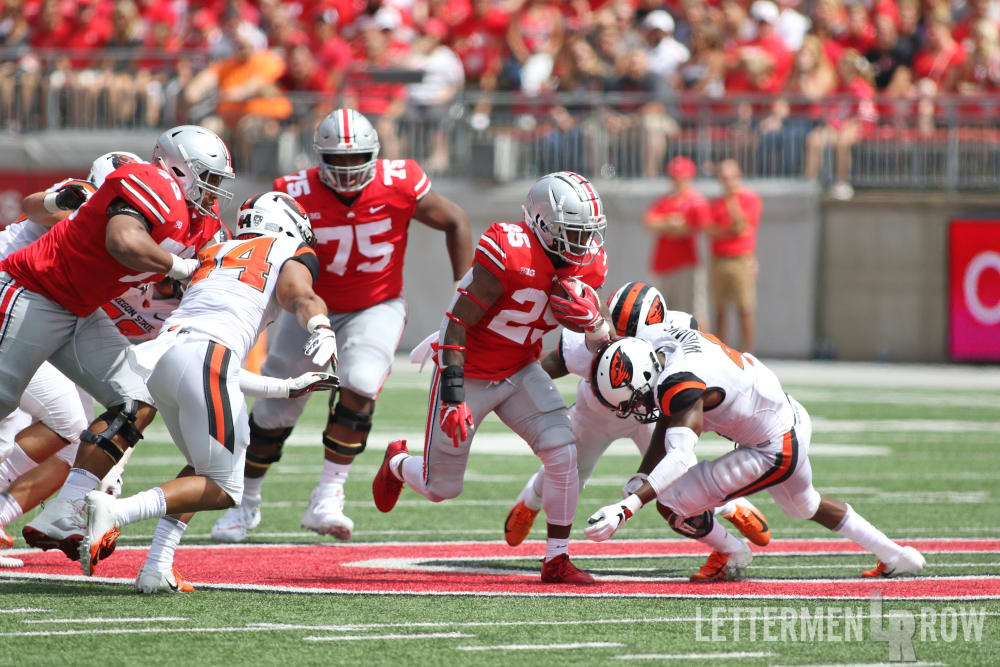 Mike Weber is already well on his way to a potential 1,000-yard season at Ohio State. (Birm/Lettermen Row)

COLUMBUS — As far as tuneups go, Ohio State got almost everything it could have asked for in the season opener.

Dwayne Haskins was confident and comfortable in his starting debut at quarterback. Both the offense and defense delivered some highlights. The Buckeyes also won easily against Oregon State in the Horseshoe — while also leaving with a handful of teachable moments that will be used to focus attention on the practice field this week as Urban Meyer returns to work.

Once again, Ohio State will be without Meyer on game day this weekend against Rutgers as the program looks to claim its first Big Ten victory of the season. And how that dynamic will work is just one of the Five Questions that Lettermen Row is looking at as the second game week of the season begins.

This may sound obvious, but it’s hard to find any negatives in adding a three-time national champion back to the coaching staff. Having Meyer back in his office, leading staff meetings and running practices again should only provide a lift for the Buckeyes, particularly from a motivational standpoint. And rather just stressing that it’s business as usual, now Ohio State can actually, completely return to it leading up to the matchup with the Scarlet Knights. Not having Meyer on the sideline wasn’t an issue at all against Oregon State, and it shouldn’t be again this weekend. But it will be interesting to see if Meyer tries to install some offensive tweaks into the game plan after watching the opener from the couch. 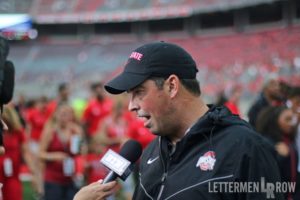 Can the Ohio State defense cut down on explosive plays?

For the most part, the Silver Bullets looked the part of a dominant unit. But one that really wants to be the best in the country doesn’t suffer the kind of lapses the Buckeyes did in allowing a pair of touchdowns that covered 78 and 80 yards, respectively. There were clear improvements to be made in terms of tackling, angles to the ball and avoiding assignment breakdowns. The good news for Ohio State is that’s not uncommon for season-opening games, and the defense only figures to improve. The bad news? Some of those issues are holdovers from last season, most notably with the unit led by linebackers coach Billy Davis.

What does Dwayne Haskins do for an encore?

It’s a credit to both Dwayne Haskins and Ryan Day that both were more focused on one interception than the record-setting five touchdowns for a first-time starter on Saturday. That’s a positive sign that the Buckeyes are aware there is more work to do for the redshirt sophomore. Carving up the Beavers doesn’t make Ohio State a finished product offensively or confirm Haskins as a possible first-round draft pick, and it will be critically important for him to protect the football when the competition gets stiffer. Of course, there was also a lot of glimpses at his enormous upside, and Haskins might have another chance to rewrite the record books against the Scarlet Knights.

Who is going to emerge on special teams?

Ohio State spent the offseason suggesting it would treat the kickoff and punt return spots as full-time jobs, allowing guys to devote their attention to learning that craft and provide a spark that has been notably missing for a couple seasons on special teams. So, if that’s still the case, is the position still up for grabs with both Demario McCall and C.J. Saunders getting opportunities there against Oregon State? How does that affect where they stand offensively? McCall had the more impressive afternoon in that competition thanks to an exhilarating 26-yard punt return. But this is a role that continues to bear monitoring.

Believe it or not, there was a time when Meyer’s programs were criticized for failing to produce 1,000-yard running backs. Now Ohio State looks like it might have two tailbacks do it in the same season. The Buckeyes look fully committed to rotating Mike Weber and J.K. Dobbins in the backfield, and there’s good reason for that thanks in large part to the health of the former. Weber knocked out a huge chunk of work in the hunt for 1K by racking up 186 yards in the opener, and he’s back to the level Ohio State was anticipating last season before a hamstring injury derailed his year. There’s still no doubt about the talent of Dobbins, and as long as Ohio State keeps both busy, the numbers those two could put up might be eye-popping.