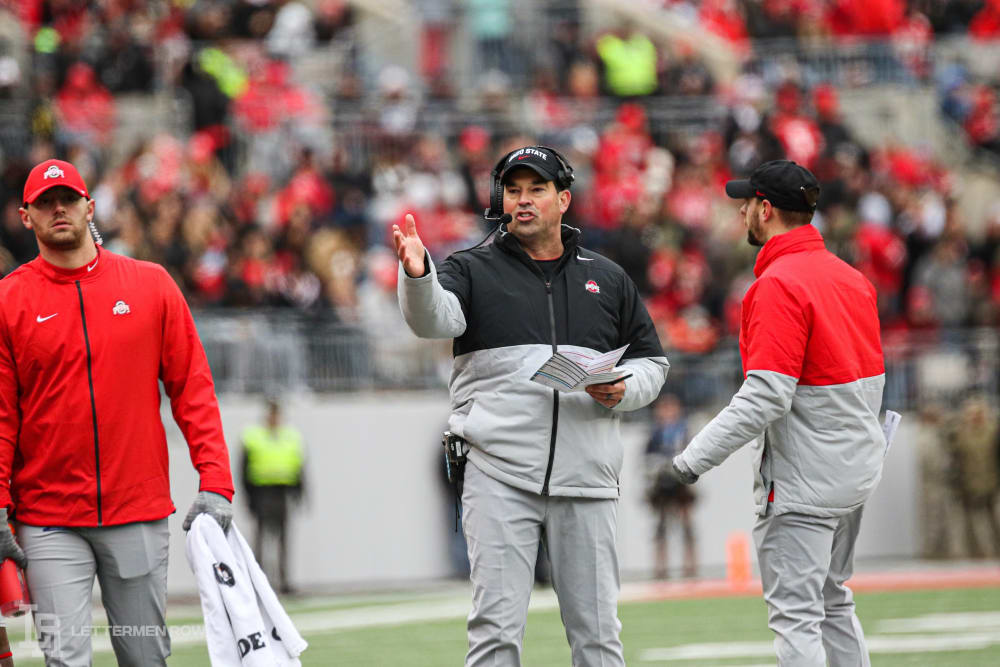 COLUMBUS — The week of preparation for Chase Young at Ohio State will proceed like normal.

But the Buckeyes still don’t know yet if it will end with the superstar defensive end on the field.

While the program awaits word on the NCAA decision on Young’s status moving forward, though, the junior captain will continue to participate in meetings, he’s still certainly welcomed by teammates at the Woody Hayes Athletic Center — and he is practicing just in case his absence is limited to just the one-game suspension which would have been served last week against Maryland.

“I don’t have any update for you right now,” Ohio State coach Ryan Day said. “Just an ongoing process right now. Certainly when I have and we have more information, we’ll let you know. There’s really nothing I can talk about at this point.

“I just know it’s going on right now is we’re going to prepare for him to be back this week. He’ll practice this week. Once we find out more information, we’ll go from there.”

That off-the-field situation is just about the only intrigue for the Buckeyes this week ahead of what should be a painless walk-through at Rutgers on Saturday. But that doesn’t mean it was the only lesson learned during the weekly media session with the Buckeyes, and here’s what Lettermen Row heard from the program on Tuesday afternoon.

Ryan Day has been able to steal a few glimpses at what has transpired over the last two years at LSU, and he remains incredibly proud to have worked with Joe Burrow and to have played a part in his development at Ohio State. And while it’s becoming a popular parlor game to debate whether the Buckeyes chose the right path back when it had J.T. Barrett, Dwayne Haskins and Burrow — which eventually paved the way for Justin Fields — it’s honestly a bit hard to envision now that it could have worked out any other way.

And Day isn’t going to spend any time stressing about it as he leads Ohio State into the final three weeks of the regular season with an unbeaten record when the quarterback still on campus has accounted for 37 touchdowns.

“It’s hard, but that’s being at Ohio State,” Day said. “You think about that that room, you had J.T., you had Dwayne and Joe. One is one of the more decorated players in the history of the Big Ten. The other guy is playing in the NFL. Other one is probably the leader for the Heisman right now. They all can’t play. That is the thing about being a quarterback. That’s what’s hard and sensitive about college football right now, that very situation.

“It all works out in the end. We got a great quarterback we feel good about now who is playing at a high level. I think that’s just part of the culture right now, just the environment of college football — and certainly quarterback play.”

Considering how long DaVon Hamilton has been around the program and how high his level of performance has been this season in particular, it’s a bit wild that the fifth-year senior defensive tackle would be asked both to spell his name and for the preferred pronunciation.

But with the official Ohio State roster still not listing his first name with the capital “V” and many teammates still emphasizing the wrong syllable — it’s “duh-VON” — he was given the opportunity to clarify on Tuesday. And that could be important to the NFL scouts walking through the building again and watching him blow up the line of scrimmage every week on the way to six tackles for loss and three sacks.

“I just try to do my job as best as possible,” Hamilton said. “The big thing I was trying to do at the beginning of the season was to be consistent. I feel like a lot of teams are wanting to look for that, and it’s just going to help my team out for my part. That’s just what I’ve been focused on.”

Even heading into training camp, the expectation was that Chris Chugunov would be little more than a background arm and not somebody the Buckeyes would need to play any sort of significant role. And while it’s still accurate to forecast a drop-off if Justin Fields were forced to miss any action, the rise of Chugunov into the backup spot and the impressive way he’s played off the bench has been a revelation for Ohio State.

And it would have been almost unthinkable when he was sitting on a beach in the summer of 2018 and preparing to walk away from football after graduation at West Virginia.

“I don’t know, I never really thought about it like that,” Chugunov said. “I just came here, and I planned on doing whatever I could for Ohio State. Things shook out the way they did, and I’m just grateful for every opportunity I have to play.”

Chris Chugunov: Ohio State backup QB on his role, a chance to play in his home-state of New Jersey
Watch this video on YouTube.

The matchup doesn’t mean much more to Ohio State as a whole than it simply representing the next opponent on the Big Ten schedule, and it’s not a squad that will really get the blood flowing quite like Penn State or Michigan will the next two weeks. But for Jonah Jackson, the trip back to Rutgers will certainly be special.

The graduate-transfer guard who was a former captain for the Scarlet Knights will get a chance to go see his old teammates and play in his old stadium at a school where he has a diploma. And he’ll also have an opportunity to show off a bit with the Buckeyes as one of the key cogs for a team that appears to be barreling ahead to the College Football Playoff.

“There’s something about Jonah to me that’s really helped that group,” Day said. “They brought a certain level of professionalism, they communicate, the way they go about their business, fun to be around — the whole thing.

“I think they were great for Jonah. I think Ohio State was great for Jonah at the right time. Sometimes in those situations they don’t work out great, it’s could be a round peg in a square hole. This wasn’t. This was a great fit. Personality-wise, the whole thing.”

Healthy Baron Browning can make tough Buckeyes defense even better
CFP Reaction: Deserved or not, Buckeyes drop might work in their favor