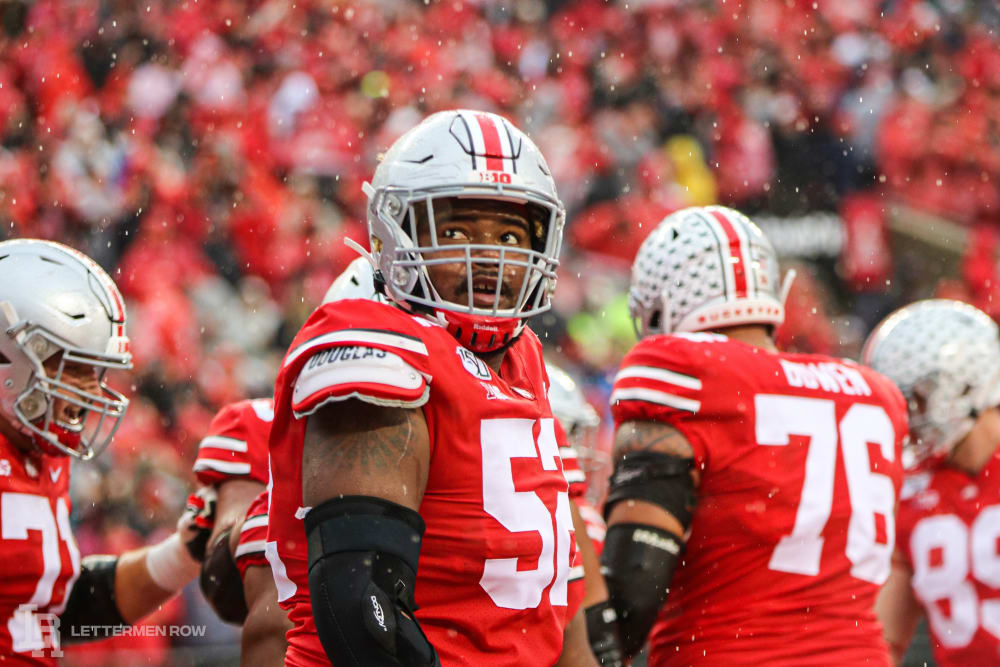 Ohio State and guard Wyatt Davis now know when they will kickoff at Rutgers. (Birm/Lettermen Row)

COLUMBUS — Ohio State dodged the possibility of one final primetime road trip heading into the closing stretch of the regular season.

It might have always been unlikely that the the mid-November trip to hapless Rutgers would get shifted into an evening kickoff. But the Buckeyes are such a powerful draw and have spent so much time away from home playing under the lights over the last few years, they’ll surely breathe a sigh of relief to avoid another one anyway.

The networks are using the six-day window before nailing down a final time, the league announced on Monday. But Ohio State will kick off at either noon, 3:30 or 4 p.m. when it visits the Scarlet Knights next week in what will amount to the final tuneup opportunity for the two-time defending Big Ten champions before the chance to make it a hat trick gets tested with massive showdowns against Penn State and Michigan.

The Buckeyes are currently coming out of an off date before hosting Maryland on Saturday, providing a unique three-week window that should allow them to get rested, ready and focused for the games that will decide the Big Ten’s East Division.

The schedule-makers didn’t exactly do the Buckeyes any favors by stacking Penn State and Michigan back to back at the end of the slate. Although, it might have been balanced out by the breather last week and what figures to be a couple games to start the month against the bottom of the divisional barrel — and the television networks and conference cut a bit of slack  by putting the Rutgers matchup in daylight.

“I mean, of course it’s important to stay focused right now,” Ohio State coach Ryan Day said last week. “If they’re reading the hype, if they’re reading all that stuff, then they’re more foolish than I thought they would be. I don’t think our guys are going to do that.

“I think we’re just going to work every day to get better. [The hype now] is from the same people that picked us — I don’t know if we were fourth, fifth, wherever we were in the Big Ten East — that didn’t matter at that point. It’s not going to matter anymore. It doesn’t matter to the game on Saturday. And so as long as we just focus on that, we’ll be fine.”

Perhaps no team in the country has done a better job of staying locked in for each opponent so far. And once the Buckeyes are done with Maryland, now they know exactly when they need to be ready for Rutgers.