COLUMBUS — If there were only whispers, Ohio State might have been able to keep ignoring the calls for improvements for the ground game.

But after the disaster at Purdue, the Buckeyes obviously couldn’t tune out the yelling — especially when there was so much noise about finding a solution just within the Woody Hayes Athletic Center.

The talented tailbacks wanted to get back to doing what they do best. The offensive line was tired of hearing about how they couldn’t move the line of scrimmage. Even the coaching staff was feeling the heat after Urban Meyer kept the coordinators off the road for an unscheduled, 12-hour marathon to find out both what was wrong with the Buckeyes and how to fix it.

A win over Nebraska powered by a resurgent rushing attack is only one game. But it was certainly a clear sign of progress as J.K. Dobbins racked up 163 yards and three touchdowns thanks in part to new, creative ways to pound the football. 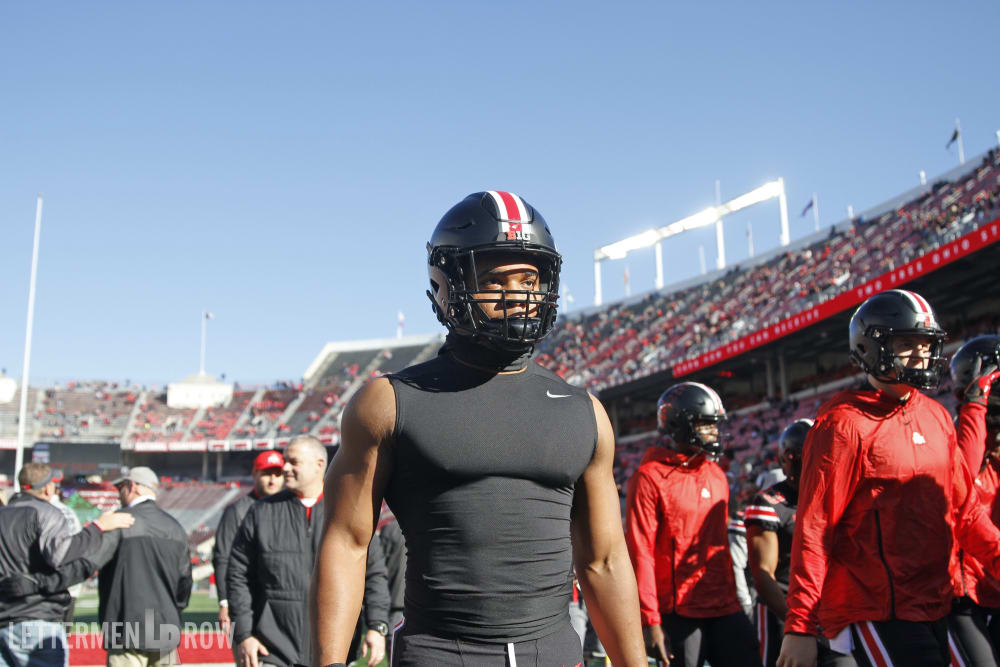 Ohio State running back J.K. Dobbins turned in his best game of the season against Nebraska. (Birm/Lettermen Row)

“Teams are loading the box on us,” Ohio State coach Urban Meyer said. “Especially last week and with what a lot of teams are playing on defense down there is called Bear Zero, which is just two extra hats wherever you go, so you have to throw it. But we want to run the ball.

“We go back, look at what we’ve done. And you have [offensive coordinators] Ryan Day, Kevin Wilson others from other styles of offenses, and we have that conversation and we go back and see the best red-zone offenses in the country. You’re talking about probably 40 hours of time into that. So, it was great to see J.K. dive into the end zone twice.”

Dobbins didn’t have to leave his feet for the third score of the game, a 42-yard dash after darting through a hole on the right side of the line and cruising for a victory-sealing touchdown. And along with Mike Weber, the Buckeyes checked off a lot of boxes to prove they can certainly still run when they need to get the tough yards that way.

How did Ohio State get all that done coming out of the off date? Was there any difference in the way Dobbins was running against Nebraska? Former Ohio State and NFL tailback Boom Herron returned to the Lettermen Row film lab for his latest BuckIQ episode, breaking down the signs of improvement on the ground as the Buckeyes gear up for a huge test against the best rush defense in the Big Ten on Saturday at Michigan State.

Lettermen Live: Did Ohio State fix itself in time for Michigan State?
Ohio State shouldn’t tinker with what works — even for Tate Martell
Advertisement