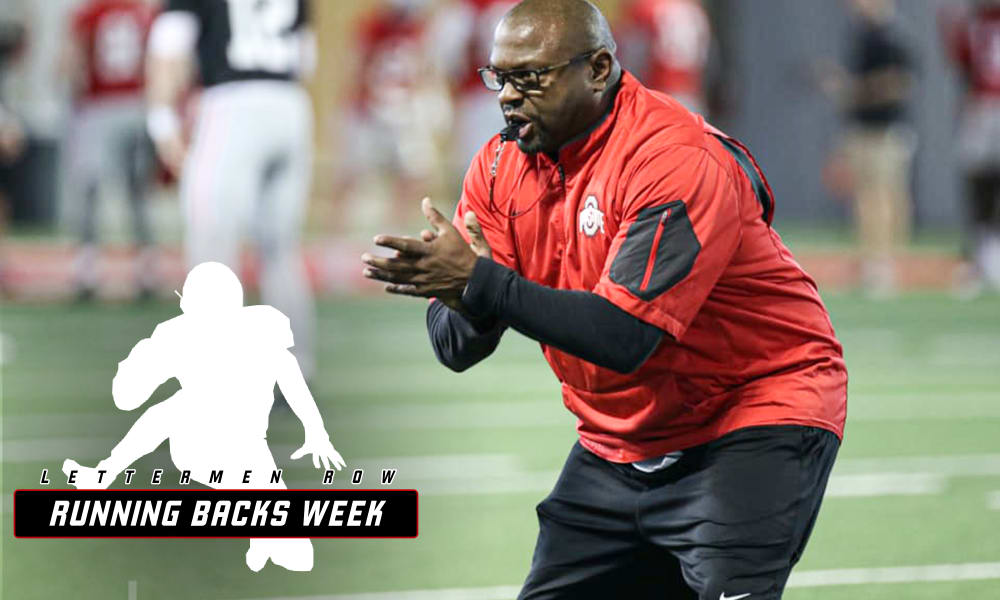 Ohio State running backs coach Tony Alford has no shortage of talent to work with this season. (Birm/Lettermen Row)

COLUMBUS — Tony Alford knows better than to pin himself to a prediction, so the Ohio State running backs coach has a go-to reply about how he’ll manage his position.

First, there’s a smile. Then he reminds anybody around that he doesn’t own a crystal ball.

So, how many carries will J.K. Dobbins get this year? Will the Buckeyes continue to rotate tailbacks? Who is next in line to help fuel the ground game at a program that has built one of the richest traditions at running back in the nation?

Alford certainly didn’t have any reason to talk about specifics much during camp in March and April, and that will likely be the same case in August when the Buckeyes are back on the practice field gearing up for the first season with Ryan Day at the helm.

The most likely outcome is Dobbins taking on a heavier workload than even 60 percent of the carries given his track record, another year of development and the fact that there’s no clear-cut secondary option like Mike Weber around this year. But Ohio State remains loaded with talent at the position, and Master Teague, Demario McCall and newcomers Marcus Crowley and Steele Chambers are all capable of pushing for action in a heated training-camp battle.

Lettermen Row doesn’t have a crystal ball, either. But as Running Back Week winds down, there is film from the past to break down that can help set the stage for what’s next for Ohio State at that critical position.

Heading into what is expected to be his final campaign with the Buckeyes, junior J.K. Dobbins is looking for another 1,000-yard season and a return to his sharper form as a freshman. How can he get rolling with a head of steam once more for the Buckeyes? Former Ohio State star Beanie Wells looks back at what made Dobbins so dangerous in the first place.

What did that 11-touch, 53-yard performance mean for Marcus Crowley in the spring game? How soon will he be ready for the rigors of the Big Ten? Can he become the top backup behind J.K. Dobbins? Former Ohio State star tailback Beanie Wells was back in the Lettermen Row film lab breaking down the spring game for Crowley and projecting what’s to come with one of the next guys in line to uphold the tradition in the Buckeyes backfield.

What does that solid spring game mean for Master Teague moving forward? Are changes in his game already evident to the trained eye? What gives the Buckeyes confidence that he can be a difference-maker for the rushing attack? Former Ohio State and NFL running back Beanie Wells was back in the Lettermen Row film lab breaking down that spring-game outing for Teague in the latest episode of BuckIQ.

BuckIQ: Where will signee Steele Chambers fit best for Ohio State?
Watch this video on YouTube.

Former Ohio State running back Beanie Wells was back in the Lettermen Row film lab to pop in the high-school highlights and try to get a feel for which position might best suit Ohio State signee Steele Chambers ahead of his freshman season in his latest episode of BuckIQ.

When healthy and at his best, there is no denying the athleticism of Demario McCall. Is this the season he finally puts it all together for the Buckeyes. Former Ohio State wide receiver Evan Spencer looks at some old film to see what makes McCall so valuable for the program.