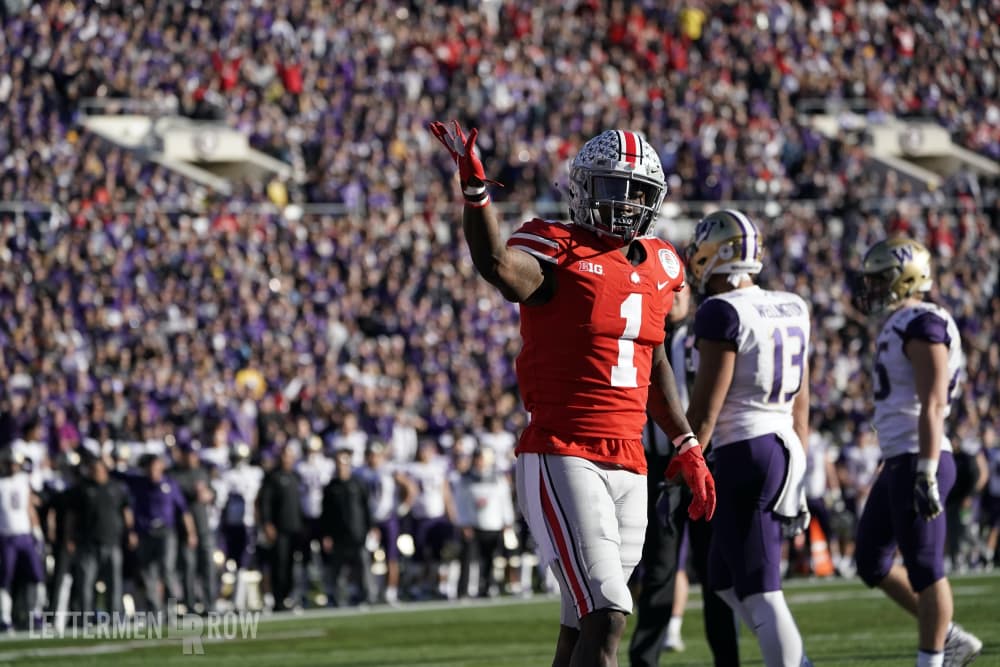 Johnnie Dixon and Ohio State finished on a high note in the Rose Bowl. (Birm/Lettermen Row)

PASADENA, Calif. — Ohio State showered in confetti one more time, grabbed another championship trophy and popped some roses into their mouths.

The Buckeyes weren’t in a hurry to end the celebration on Tuesday evening at the Rose Bowl, even if the party occasionally came with a sobering realization that major changes were coming for the program.

Urban Meyer is heading into retirement. Ryan Day took the reins and was handed a ceremonial whistle to kick off his tenure. And there is still uncertainty about how many of the assistants will be back following the 28-23 win over Washington to cap another successful at Ohio State.

The Buckeyes earned the right to focus on their accomplishments for a day or two, though. So, before completely turning the page to the future, Lettermen Row is looking back at What We Learned in the Rose Bowl.

The bar has clearly been raised for quarterbacks at Ohio State. And even if Dwayne Haskins makes the unlikely decision to return to the program, the records he set would still be hard for him to track down given how ridiculously productive he was during his redshirt sophomore campaign. With three more touchdown passes against another top-tier defense, Haskins ran his total to 50 for the season — which he complemented with four more on the ground for good measure. Obviously Haskins can still improve given how relatively early it still is in his career, so maybe even more absurd numbers could be in reach with the Buckeyes next year if he stuck around. But no matter what he decides, what Haskins did in his first season as a starter will never be forgotten. 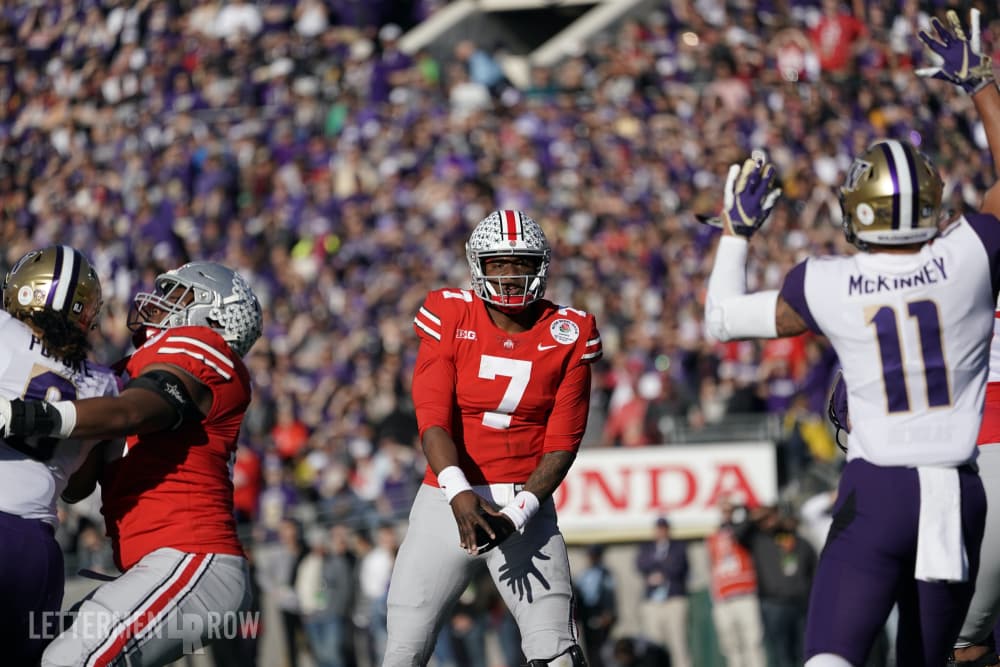 Jeffrey Okudah is poised to be superstar

The first sign of the enormous potential came a year ago in the Cotton Bowl with an unexpected start. One year later, Jeffrey Okudah showed how far he had come with a dynamic outing in coverage for Ohio State, impressively breaking up a couple passes and flying around to make five tackles as well. The secondary has justifiably come in for some criticism this season, and Okudah suffered his share of growing pains during his first stint as a regular in the rotation. But as he continues to grow and develop, his incredible athleticism has him in line to be the next first-round draft pick coming off the cornerback assembly line for the Buckeyes.

Neither Mike Weber nor J.K. Dobbins ever did much public complaining about the timeshare in the Ohio State backfield, but there were certainly times where it might have been justifiable for them to do so. The reasoning was sound for the Buckeyes since it allowed them to keep both tailbacks fresh and involved in the offense, but that approach just never really clicked — and often seemed to actually hurt the rushing attack. Again in the Rose Bowl, Ohio State appeared unwilling to roll with the hot hand when Weber was lowering his pads and gashing Washington, averaging nearly twice as many yards per carry but only finishing with six more touches than Dobbins. Both guys bring plenty to the table, but this season it largely felt like neither was allowed to find a rhythm and really build momentum for the ground game. Even with Weber gone, Ohio State has other guys like Master Teague who could complement Dobbins — but it needs to be smarter about how it distributes the workload. 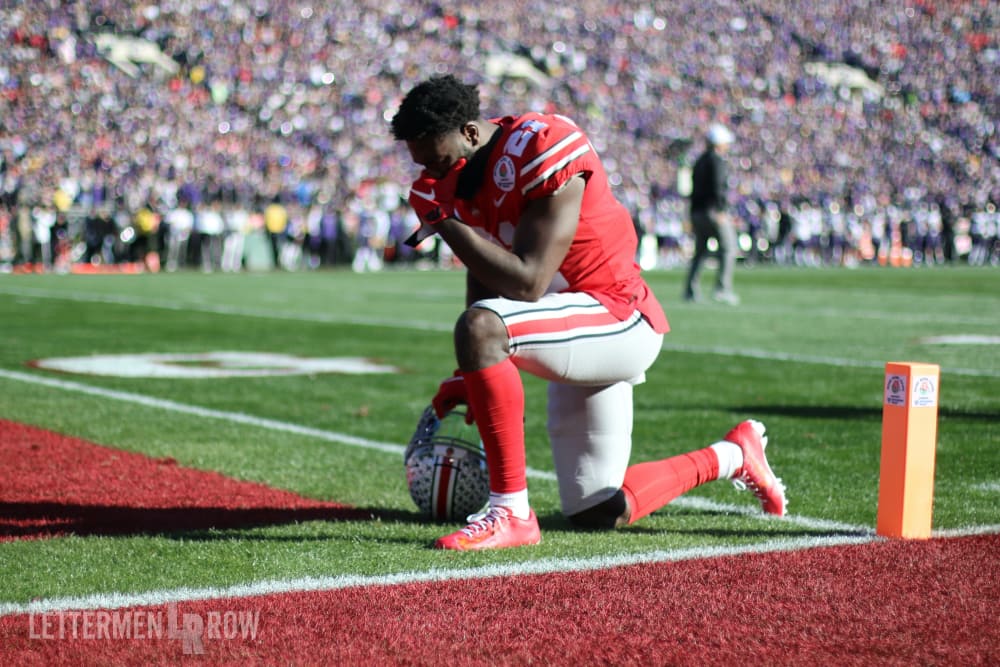 Each of Ohio State’s three senior captains at wide receiver handled the moment differently in the postgame locker room. Johnnie Dixon sat in a chair exhausted after grabbing one more touchdown pass. Terry McLaurin smiled as he tried to process his emotions after another solid all-around effort highlighted by his thankless work as a gunner in punt coverage. And Parris Campbell was running around the tunnel at close to full speed with a Rose Bowl trophy in tow after putting the finishing touches on one of the most productive seasons by a wideout in school history. The three of them earned their moments in the spotlight, because all of them had to overcome different forms of adversity over the years. What they accomplished is a tribute to their work ethic, and Ohio State will no doubt pay tribute to them for years to come.

Silver Bullets are loaded for next season

The defense appeared to save its best for last for the second year in a row. And while there were still a few breakdowns in the win over Washington and changes to the coaching staff are likely coming, Ohio State can use the Rose Bowl as a springboard with so much talent coming back next season. The Rushmen are absolutely loaded with Chase Young and Jonathon Cooper set to lead a group that might be the deepest Larry Johnson has ever worked with at Ohio State. With Malik Harrison coming back, the Buckeyes will have all three starters in the fold at linebacker with a handful of once-touted recruits pushing for playing time. And along with Okudah at cornerback, the secondary should be solid with Jordan Fuller leaning towards a return at safety, Brendon White emerging as a starter and the versatile Shaun Wade in line for a bigger role. Whatever happens with the defensive staff, the personnel on hand has incredible upside.