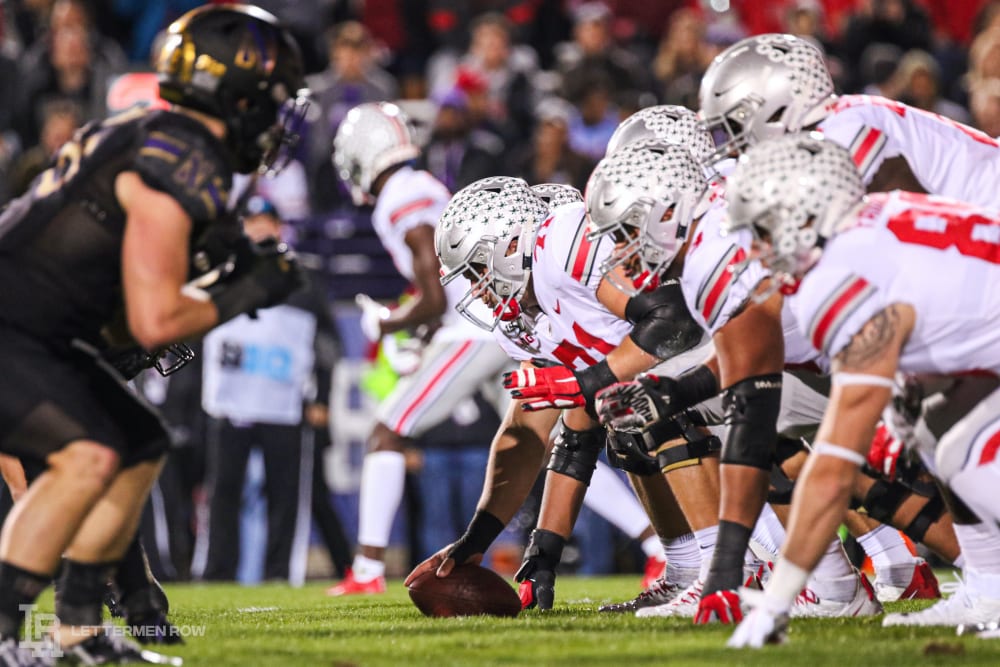 Ohio State has dominated in the trenches so far this season. (Birm/Lettermen Row)

COLUMBUS — Ohio State held up its end of the bargain.

And even if Wisconsin couldn’t do the same, that doesn’t mean the Buckeyes should be expecting anything less than their toughest, most physical test of the season on Saturday.

The Badgers coming off a shocking upset doesn’t change the fact that they’ve proven to be one of the best defensive teams in the country. They still have a talented tailback who will provide a challenge for the rejuvenated Silver Bullets. And while the spotlight certainly dimmed considerably on the opponent, the Buckeyes know all eyes around the country will still be on them at noon in the Horseshoe as they get another chance to prove their legitimacy as a national-title contender.

“I’m ready to dive into that [Wisconsin] game,” Ohio State running back J.K. Dobbins said shortly after the latest blowout win over Northwestern on Friday. “The last game is behind us, that’s over with.”

The Buckeyes skipped some of the usual celebrations and immediately turned their attention to Wisconsin, fully expecting it to be a showcase opportunity and potential slugfest. Obviously it’s not going to get quite the same billing as before, but it remains a critical Big Ten battle and Wisconsin is still an opponent that Ohio State has tremendous respect for, which means another tough week of preparations will be on tap at the Woody Hayes Athletic Center.

As the program turns the page after their seventh win of the season, Lettermen Row is setting the table with Five Questions for the Buckeyes heading into Wisconsin Week. 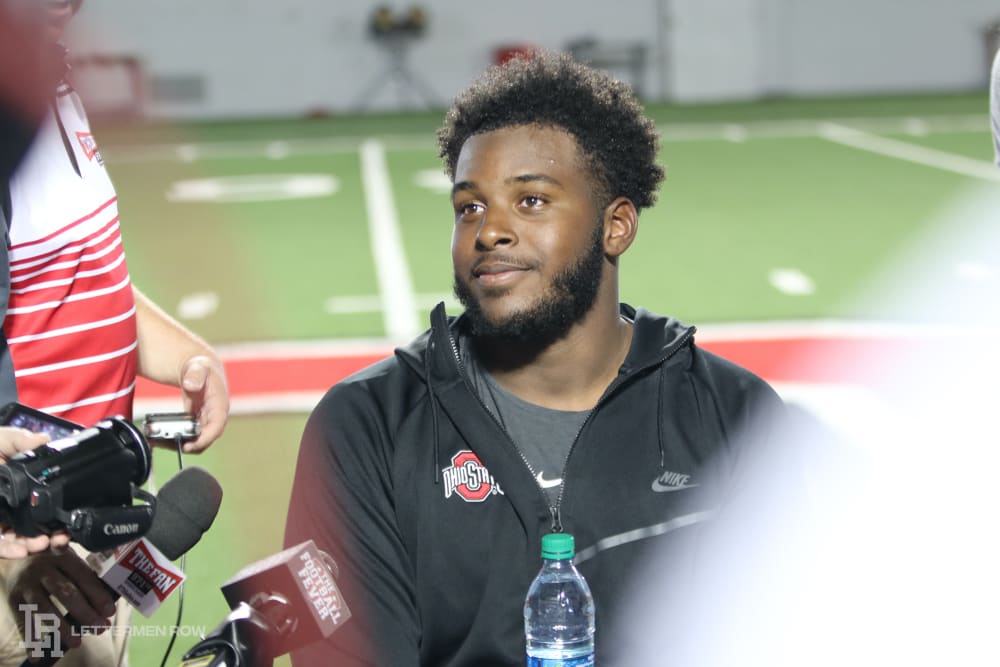 How healthy will Ohio State be up front?

Even on an injured ankle that was clearly still giving him pain, Thayer Munford was able to come off the bench and give Ohio State some production at left tackle last week. By all accounts, the Buckeyes always intended to get the veteran involved even after giving Nicholas Petit-Frere the start in his place. So, Munford wasn’t inserted just because the youngster was flagged for a holding call and missed a key block that put quarterback Justin Fields under pressure. But against a tenacious defensive front like Wisconsin, Ohio State will need to be as close to full strength as possible — and that includes getting sixth man Josh Alabi back in the fold. There’s no doubt the reps were valuable learning experiences for Petit-Frere, and he’ll keep growing. But Munford’s ankle is going to be getting a lot of attention this week.

Will Buckeyes have same urgency after Wisconsin loss?

Thanks to the talent disparity, the truth is Ohio State was going to be a double-digit favorite against Wisconsin no matter what happened on Saturday at Illinois. A top-six matchup obviously would have ensured the Buckeyes had their focus dialed in at the maximum level, but now the trick is treating the Badgers that way even after seeing a bunch of flaws exposed and a lightweight opponent having its way with them. Upsets happen in college football all the time, as the Buckeyes know all too well after the last couple seasons. So, their own experiences on the way to winning the last two Big Ten titles might inform their thinking this week and keep them from suffering any sort of letdown now that the matchup doesn’t seem to have quite the same high-level stakes.

The Buckeyes have ended a few Heisman Trophy campaigns over the years, and they’ve also had success against guys who actually won the stiff-arming statue. Now it’s Wisconsin running back Jonathan Taylor’s turn to take his shot against a defense that will be designed to shut him down, and he’s going to have his hands full with Ohio State expected to have Baron Browning back in the lineup. The playmaking linebacker missed the win over Northwestern with what Lettermen Row was told was a minor groin injury, and while the Buckeyes held up just fine for the most part by allowing just 3.3 yards per carry, there was actually still room for improvement in that easy win. Taylor and the Wisconsin offensive line will probably wind up providing the biggest challenge of the regular season for the Silver Bullets, and the matchup could provide some validation of the defensive turnaround so far this year. 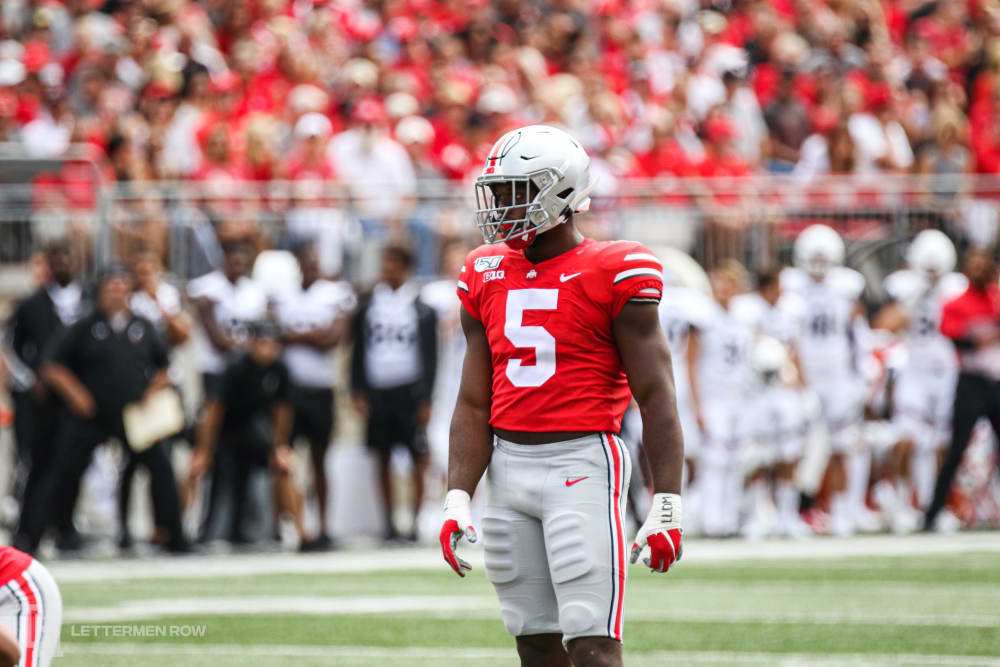 Ohio State linebacker Baron Browning is expected back in the lineup for the Buckeyes this week. (Birm/Lettermen Row)

Will J.K. Dobbins get credit he deserves this week?

Part of the reason J.K. Dobbins isn’t getting much traction as a Heisman Trophy candidate is the fact that he’s on the same team as two other guys who will be in the voting mix. But the other factor is the attention Taylor gets as the presumptive Best Tailback in the Big Ten, which is almost certainly one of the chips Dobbins has been carrying on his shoulder all season before dropping his pads and bowling over defenders. The junior has made it no secret that he wants to establish himself as the best rusher in the country, and even though they aren’t on the field at the same time, this is the kind of head-to-head, measuring-stick game that Dobbins craves. Expect to see a supremely motivated Dobbins on Saturday, and he might leave the Horseshoe this week with a much stronger case as the league’s top running back.

The Badgers have been pretty careful with the football through the air this season, and Jack Coan has only thrown two interceptions through seven games. The Wisconsin quarterback hasn’t faced a secondary as talented as the one Ohio State will unleash against him, though. And the “Best in America” unit could be one that swings the advantage in favor of the Buckeyes, particularly because the defensive coaching staff will no doubt be trusting them to win their matchups while devoting extra resources to stopping the rush. Opportunities should be there for Jeff Okudah, Shaun Wade, Damon Arnette and Jordan Fuller to grab a pick or two, and there’s no question those defensive backs are hungry to make an impact.

Buckeyes open as favorite for huge matchup against Wisconsin
Who helped their cause in Buckeyes dominant win over Northwestern?
Advertisement