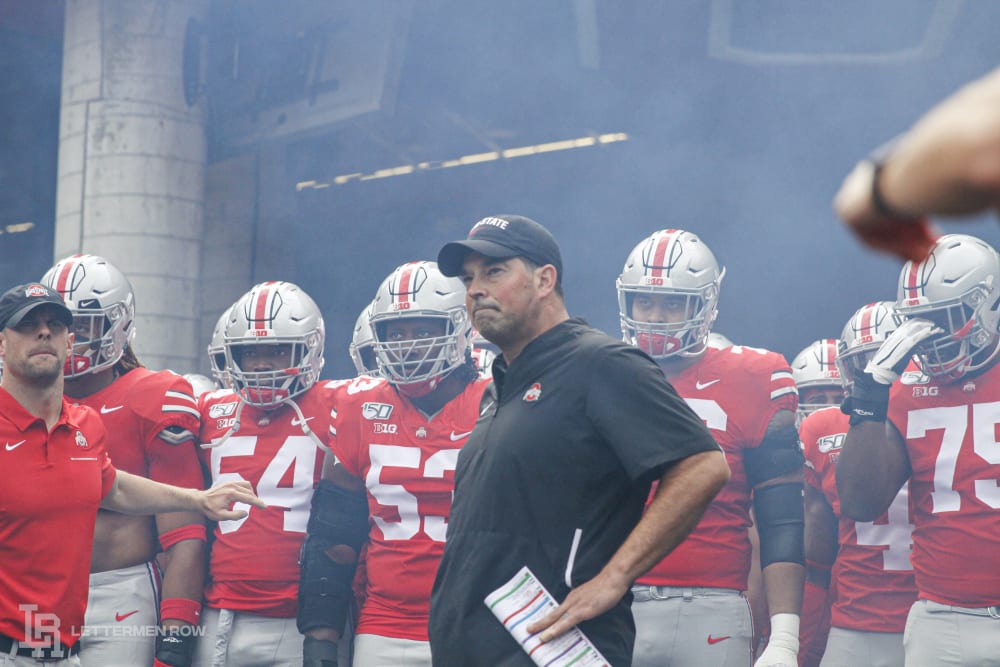 Ohio State coach Ryan Day will lead the Buckeyes into Big Ten play on the road at Indiana. (Birm/Lettermen Row)

That approach might even be a little easier over the next few days.

While a team with national-title aspirations never gets a true clean slate since there are no preseason games at this level, a different competition is set to start for the Buckeyes on Saturday as Big Ten play opens at Indiana. Day has already got some early momentum behind him after his program showed dramatic improvement from Week One to Week Two with a shutout victory over Cincinnati, and he’ll need that to keep rolling as the Buckeyes hit the road for the first time.

“Every game in college football, to me, every week is a whole new season,” Day said. “So, we have to keep building on this. We want to have the best defense and offense and special teams. With that comes a lot of work, a lot of dedication, a lot of sacrifice and I think we’re on the right journey that way.

“But we go into conference play next week and we have to start over again. Because when you come into the game, so much comes into it preparation-wise — physically, emotionally mentally — to make sure you execute what you need to execute on Saturday. And so we have to start that journey again.”

That journey ventures outside of the Horseshoe this weekend as Ohio State pays visit to the Hoosiers. And like every week, Lettermen Row is getting set for the week ahead with Five Questions for the Buckeyes.

Is Justin Fields ready for his next challenge?

Cincinnati was supposed to provide a tougher test and better indication of where Justin Fields is in his early acclimation to the Ohio State offense. If that was truly the case, the Buckeyes are going to be feeling pretty confident in what they have with the sophomore quarterback based on the way he sliced up the Bearcats. His second outing appeared to show much greater command of the attack, he left no doubt about how sharp his accuracy can be as a passer — and his mobility is going to give defensive coordinators nightmares as the season progresses. Next up on the checklist for Fields? Handling a road environment. Indiana isn’t the most hostile place the Buckeyes will visit, obviously, but this is still a significant part of the development process.

Will Jonathon Cooper return for Ohio State this week?

The Buckeyes got much healthier up front last week with both Tyreke Smith and Tyler Friday getting fully cleared for action. But Ohio State was still missing senior captain Jonathon Cooper on the edge, though it does appear he’s getting close to getting back in the lineup and making the Rushmen even more dangerous. Sources familiar with Cooper’s high-ankle injury indicated to Lettermen Row that he could be back on the field as early as this week against Indiana, though there are still several days of practice and medical evaluations ahead of him before that decision is made. If Ohio State chooses the cautious approach with Cooper, it probably doesn’t truly need him back on the field until maybe Week Five at Nebraska. But Cooper was building toward a special final year with the program throughout the offseason, and he’ll almost certainly push to get back to business as early as possible to get the rust off and again help lead the Buckeyes. 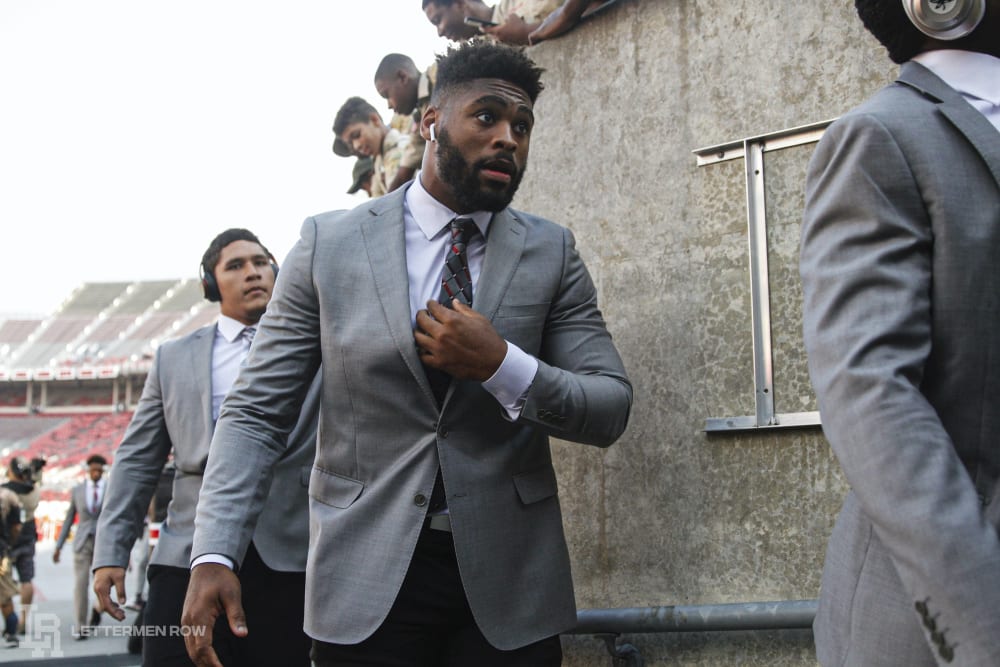 Ohio State captain Jonathon Cooper appears to be nearing a return for the Buckeyes. (Birm/Lettermen Row)

How much work is Master Teague pushing for with Buckeyes?

The top tailback was handling his business again just fine for the Buckeyes, and J.K. Dobbins certainly answered the bell after a week of both public and private challenges to elevate his game. Maybe part of that motivation also came from some of the impressive work Master Teague did in relief during the opener, with the second-year running back starting to build a case that he should play more prominent role in the rotation. Teague again caught the eye with his hard-charging, physical rushing style in the win over Cincinnati, and he seems to be on the brink of officially becoming the No. 2 guy in the backfield. Dobbins, for his part, made sure there’s no doubt about the top spot by mixing in both electrifying runs and bone-rattling blocks to offer a reminder that he’s a do-it-all guy for the Buckeyes.

Can Buckeyes crank up fast start at Indiana?

Weird things tend to happen against the Hoosiers, even if the outcome almost never changes. The last visit to Indiana included a first half that had plenty of folks scratching their heads about the effort from the Buckeyes before they wound up pressing the accelerator, cruising to a win and eventually setting the table to become Big Ten champions again. For whatever reason, whether it’s looking ahead or simply because the Hoosiers hold nothing back gunning for the upset, Ohio State sometimes gets bogged down in messy games against its East Division opponent. Particularly on the road, the Buckeyes could use something closer to that explosive first quarter from the opener to make sure it doesn’t need to stress down the stretch.

The first guy off the bench at quarterback in both of the first two games was Chris Chugunov, which counts as at least a mild surprise given all the expectations for Gunnar Hoak after his transfer from Kentucky. Chugunov is the Ohio State veteran at that position and should have the edge in knowledge of the offense, and that is probably helping set him apart right now as Day keeps evaluating his options behind Fields. There was a time during training camp when Day pointed out how difficult it would be on short notice for Hoak to learn everything required to play the position at the level Ohio State needs, and that process is still ongoing. In the long run, it would still seem likely that Hoak has the greater upside. But for now, it still looks like Chugunov would be the guy if for some reason the Buckeyes had to turn to a backup.