Ohio State coach Ryan Day and the Buckeyes were in the Horseshoe on Saturday. (Birm/Lettermen Row)

COLUMBUS — Maybe the highlight selection was just a coincidence as Ohio State started its stretching period at the beginning of practice.

The Buckeyes on the field at the Horseshoe had more pressing concerns than watching plays from last season, of course. But given the size of the massive videoboard behind the south end zone, it was almost impossible to ignore the loaded sizzle reel of jaw-dropping plays from the blowout win a year ago at Nebraska, a team that just so happens to be visiting Ohio State in three weeks when the season kicks off.

There were clips from games that also were featured by the time the open portion of the morning workout ended on Saturday, so the Huskers weren’t singled out. But it was a clear reminder of what’s looming for the Buckeyes, and given some of the stars that were featured in those highlights, it was also a refresher of just how much talent must be replaced.

None of those guys featured on the screen were in the Horseshoe on this brisk October morning. And yet the turf was still loaded with talent that clearly looks the part of a national-title contender and is already adjusting to the unique atmosphere that teams will have to deal with this year.

“You have to bring your own energy,” Buckeyes coach Day said on Friday. “Being in an empty stadium is unique. We went last Saturday, we’re going to go again [Saturday]. We’re going to pump a little music in and maybe have some crowd noise as we move into next week so they get a feel for how that really is going to be like.

“We know it’s not like playing in front of over 100,000 people every week. So we’re going to have to bring our own energy. When you run out of that tunnel, it’s going to be a different feel.”

The Buckeyes cranked up the sound along with the video screens on Saturday morning, and they also invited the media to watch the first few periods of practice for the first time since March. Here’s what Lettermen Row observed from Ohio State thanks to that much-appreciated glimpse at the roster. 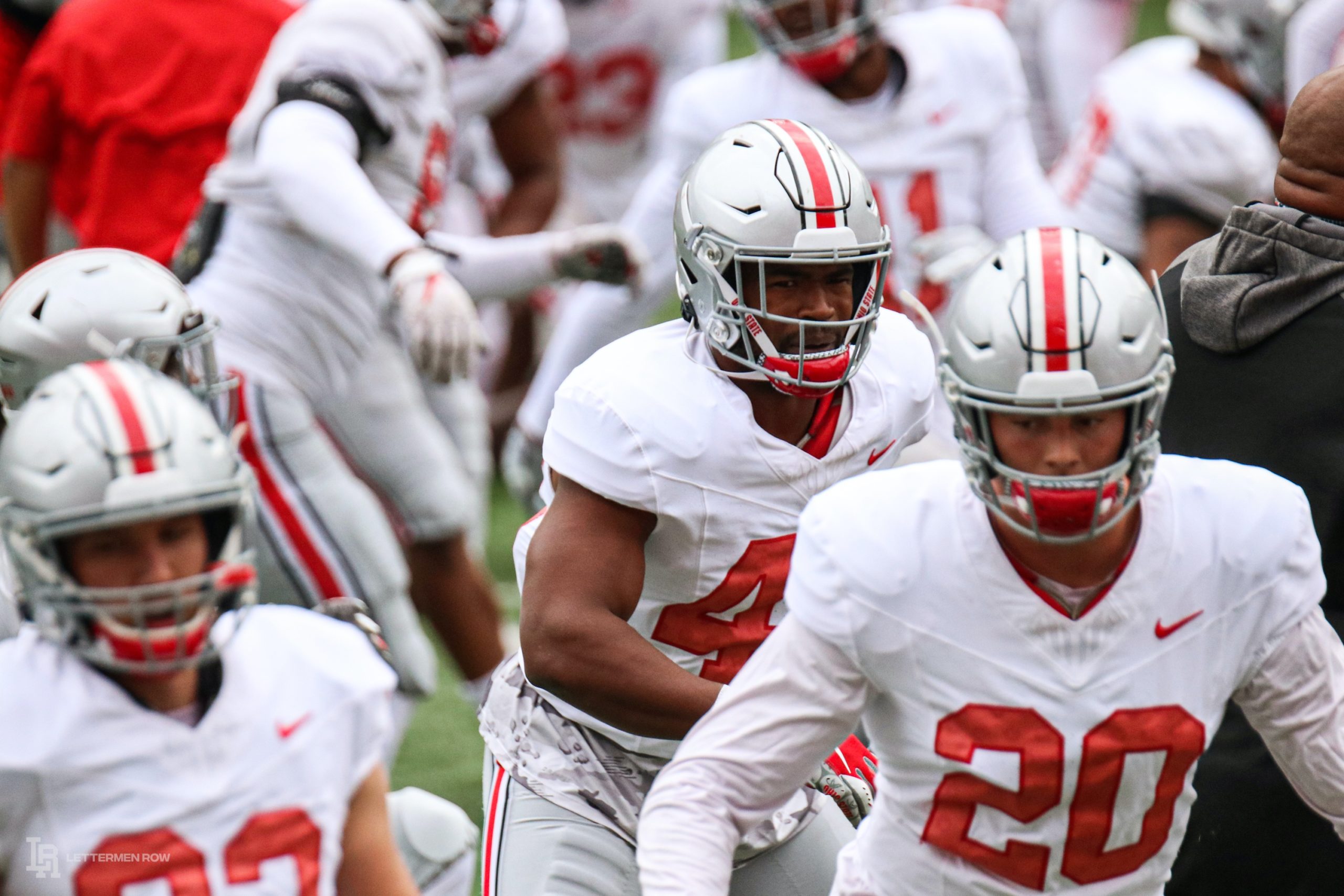 The entire roster wasn’t on the field during the open portion of practice, and Ohio State isn’t going to release an availability report until the week of the opener against Nebraska.

Given the various possible explanations for absences as well as privacy concerns thanks to COVID-19 testing, Lettermen Row will respect the program’s wishes and not provide a detailed list of participating players from the session. However, the vast majority of the Buckeyes were on the field just three days after the daily testing protocols were officially engaged in the Big Ten, and the entire projected starting lineup was on hand for Ryan Day’s squad.

Day has previously made it well known that this season would likely be a test of the depth and that every player would need to play a role at some point. And just one brief viewing period of a practice proved that there will be unexpected challenges along the way, and flexibility by the coaching staff will be invaluable.

The competition in pads is only a couple days old for the Buckeyes, so there haven’t been any definitive decisions made about the depth chart. But it already appears that Dawand Jones will be doubling his chances of finding a role for Ohio State as he experiments with reps at guard in addition to tackle, where he turned heads as a true freshman.

Noticeably slimmer heading into his second season with the program, Jones was lined up during one set of drills as the second-team right guard alongside Paris Johnson — a sneak peek at the kind of depth the Buckeyes have up front that would be the envy of any unit in the country. 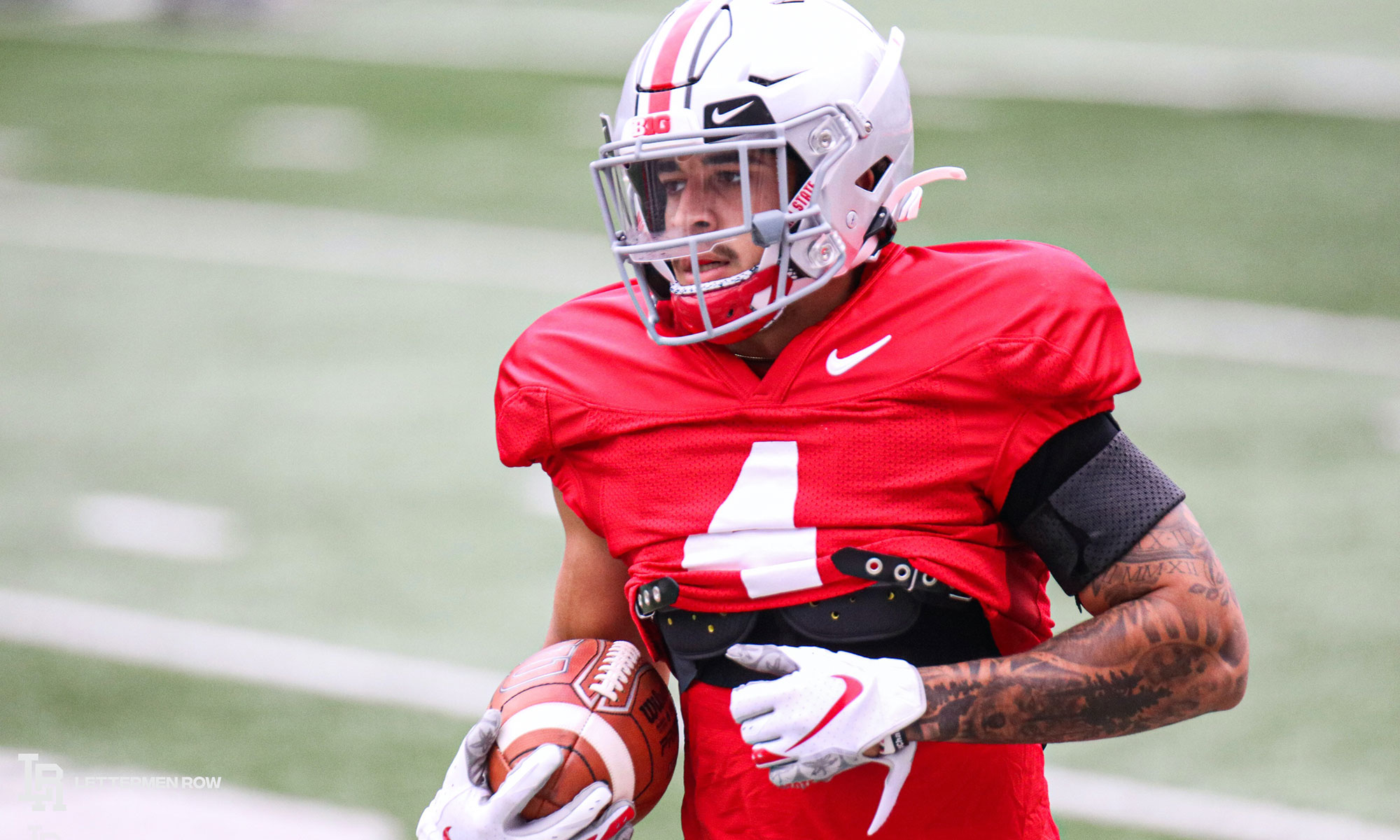 One by one, the Fab Four took turns showing off during the open portion of practice.

Julian Fleming flashed his incredible athleticism. Gee Scott flexed some physical strength that is rare for a newcomer. Mookie Cooper caught the eye with the way he attacked his reps. And then Jaxon Smith-Njigba went up to haul in a one-handed catch during individual drills.

It still remains to be seen exactly how much each member of one of the most impressive positional signing classes in recruiting history will play this season. But all of them look ready to help the Buckeyes, and it appears that it’s going to be difficult to keep them off the field this year.

Empty Horseshoe can still get loud

Ryan Day gathered up the entire team for a speech outside the south end zone, but the support staff never turned down the volume on the huge speakers in the Horseshoe. The assembled media in the stands couldn’t even make out a word from the Ohio State coach no matter how much he raised his voice, which means it’s still possible to create a home-field advantage depending on how the Big Ten decides to handle piped-in crowd noise or music on game days.

Obviously it’s going to be a strange feeling for the Buckeyes and everybody else in college football playing in empty venues. And that’s a key reason that Day has decided to take his team into the Horseshoe multiple times already in training camp to allow them to acclimate to the environment and deal with the unique challenges it will pose.

The weather hasn’t truly turned yet in Columbus, but the weather was already a bit chillier than what C.J. Stroud or Jack Miller were used to in Southern California or Arizona, respectively. So, working outside in the Horseshoe on an October Saturday was surely  a pretty useful learning experience for those young quarterbacks.

Stroud and Miller both enrolled early to try to get a crash course in the offense in hopes of competing for the backup role this year behind Justin Fields, and missing almost all of spring camp was obviously a setback for both. But the freshmen still appear to have made the most of their workout regimes since March, and the physical development combined with time absorbing the playbook during Zoom and in-person meetings with position coach Corey Dennis appear to have them back on schedule to push for snaps this year. For now, Ohio State is trying to get them as many reps with the second-team offense as possible to get them up to speed and ready to compete with Gunnar Hoak for the No. 2 spot.