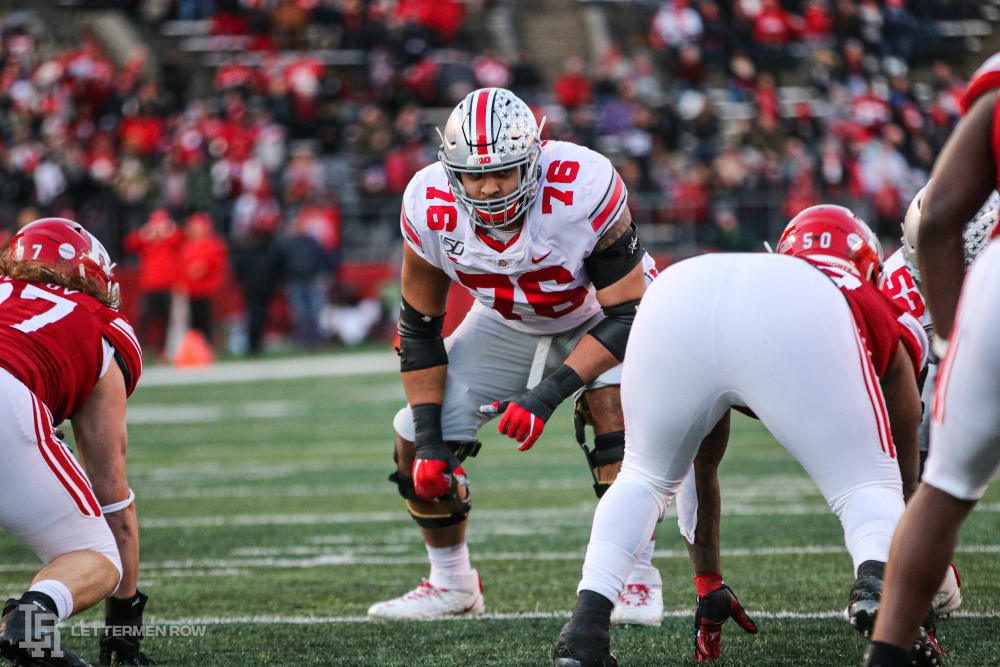 Ohio State right tackle Branden Bowen has been a solid presence for the Buckeyes. (Birm/Lettermen Row)

COLUMBUS — As much as college football offenses have evolved to more wide-open, wide-spread philosophies the past several decades, the barometer for offensive line greatness has pretty much maintained a common measuring notch.

In push-come-to-shove confrontations which usually serve as the milestones of an extraordinary season, how do the big fellas up front fare? That is: When faced with a reputed uncrackable defensive front against the run, do the tackles, guards, center and their mining cohorts, the tight ends, force a breakthrough?

Thus far, the Ohio State offensive line has found a way this season. Against Michigan State, and again several week ago against Wisconsin which entered with the nation’s No. 1 defense not only in a total sense but also against the run, the Buckeyes kept attacking. 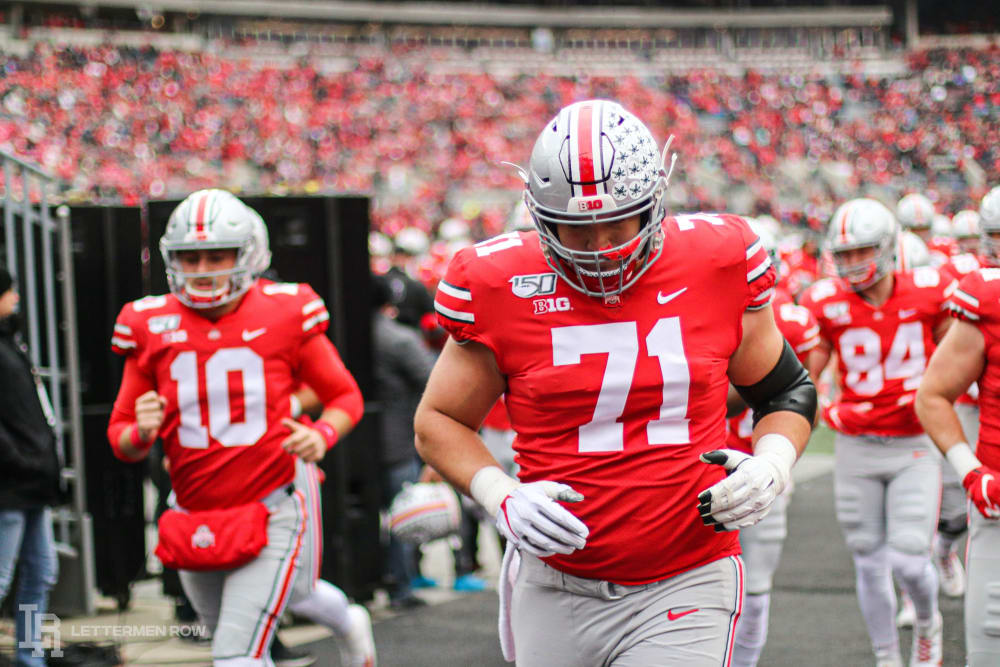 Ohio State center Josh Myers has been a standout for the Buckeyes up front. (Birm/Lettermen Row)

It’s called dedication to a cause. Like against Michigan State, it was the first true sign the Ohio State line meant business, that its dedication to toughness was real.

“When it was tough sledding early on, they didn’t panic,” Ohio State coach Ryan Day said. “They just kept swinging away.

“And the second thing is, that was a real defensive line that had some really good players in there, and I thought they (Ohio State linemen) were physical, they were finishing guys downfield. … They take a lot pride in that.”

Persistence, both on the part of the players and on the coaches to not give up on the run game early, appears to be the key for these Buckeyes.

“You have to wear them down,” Day said. “You’ve got to cover them up, backs have to turn four-yard runs into six, and then eventually over time, if you can start to run on ‘em, you can maybe start to crack some.”

In that case, what a difference a year makes. As great as the record-setting Ohio State offense was last year, it was great mainly in the realm of protecting quarterback Dwayne Haskins so he could set myriad school and Big Ten records in the passing game. In the end, while the Buckeyes had the No. 2 passing offense in the nation, they slumped to No. 63 in rushing  with just 171.3 yards per game.

Headed into Saturday’s Big Ten East Division showdown with Penn State at noon in Ohio Stadium, the Buckeyes are ranked No. 4 nationally in total offense (541.7), including No. 4 in rushing (287.4). Notable is how they’ve fared against the five better run defenses they’ve faced in Florida Atlantic (237), Indiana (270), Michigan State (323), Northwestern (279) and Wisconsin (264).

And this is an Ohio State line with four new full-time starters. Munford is the only full-time returnee from 2018, which is why there were questions on whether it could become a cohesive unit fast enough to pave the way for an attack led by dual-threat quarterback Justin Fields.

“It’s just like it’s kind of been this way since spring ball, coming back from (last) season with all the doubt and expectations, like we really didn’t have high expectations from outside sources, and I feel like that’s been really fueling our fire,” Davis said. “And too, just the love we have for each other. We’re not out here doing it for ourselves and the name on the back (of the jersey). We’re doing it for the name on the front: The Ohio State Buckeyes.

“As long as we keep on doing that we’ll keep on progressing well.”

“[Penn State] will play really hard,” Farrell said. “They’ve got some good defensive ends they rotate in, and they’re not scared of anything.

“We’re ready for that tough kind of game.”