Ohio State's run-blocking ability will be huge in the Fiesta Bowl. (Birm/Lettermen Row)

SCOTTSDALE, Ariz. — The plan was always to have a dominant offensive line by the time championship season rolled around for Ohio State.

It happened far quicker than the Buckeyes imagined, though. And that’s allowed the chemistry, confidence and dominance to reach a level that the program really couldn’t have imagined heading into the season.

A unit that reported for training camp with just one returning full-time starter quickly tapped into the immense potential that was apparent to everybody involved at Ohio State. And what once looked like a job that might take the Buckeyes half the season to accomplish instead turned into an almost overnight success story for the program, with the big guys up front wasting no time gelling and becoming one of the nation’s best units.

“We had four new guys in the offensive line,” Ohio State coach Ryan Day said. “To say I knew it was going to look just like this? No. I had an idea. Really felt like Wyatt [Davis] and Josh [Myers] coming back off of last year, we kind of knew what we had in Branden Bowen. To have Jonah [Jackson] come in there, we had some promise we could do a good job moving people off the ball. 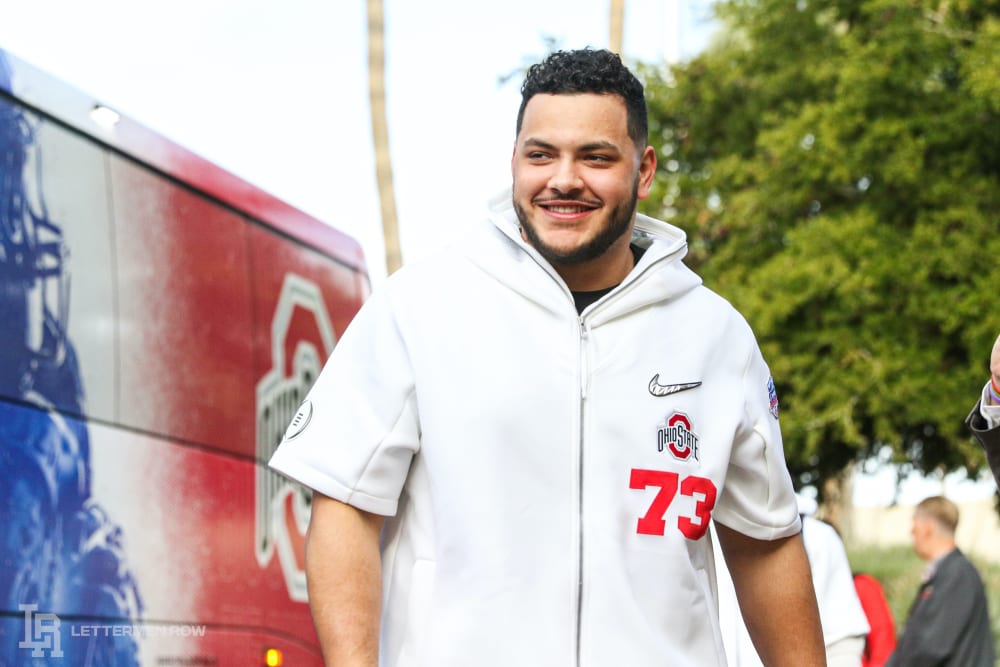 Ohio State guard Jonah Jackson has been key for the Buckeyes all season. (Birm/Lettermen Row)

“The way J.K. has run, the way we’ve moved people off the ball, that is something that’s gotten stronger as the season has gone on.”

The Buckeyes have flexed that ability in the biggest games of the season, and now another huge test has arrived in the Fiesta Bowl against Clemson.

Ohio State always emphasizes winning the battle up front, so the College Football Playoff will be no exception for the program heading into the matchup in the desert. Day always envisioned that he would have a unit capable of stepping up in situations like this against elite competition, but the expectation was that it would take time to develop — which is the only part of the projection that wasn’t accurate.

What has allowed Ohio State to be so successful with its run blocking this season? How critical will that aspect be in the Fiesta Bowl against Clemson? Is there any concern about that unit on such a huge stage in the College Football Playoff? Former Ohio State right tackle Reid Fragel was back in the Lettermen Row film lab breaking it all down and answering those questions in the latest episode of BuckIQ.