COLUMBUS — There is almost no point in singling out just one guy from the unit, and that’s generally just how the Ohio State offensive line likes it.

Of course, the Buckeyes prefer it when they’re spreading around the credit instead of sharing the blame. And in their last outing, there was some of both for the big guys up front.

In the first half, just about everybody in the lineup took a turn getting beat as the nation’s best rush defense starting piling up tackles for loss and sacks while the Buckeyes struggled mightily to gain any sort of traction moving the football. And the problem wasn’t about just one individual.

Down the stretch, Ohio State start imposing its will and grinding its way to rushing yardage that has been exceedingly hard to come by at times this season — both for the program itself and for Michigan State opponents. And the way the Buckeyes finished the game again wasn’t a product of just one blocker’s effort.

The offensive line is a package deal. And at its best it can certainly help make Ohio State a worthy Big Ten champion — but it can also be a liability when the consistency slips. 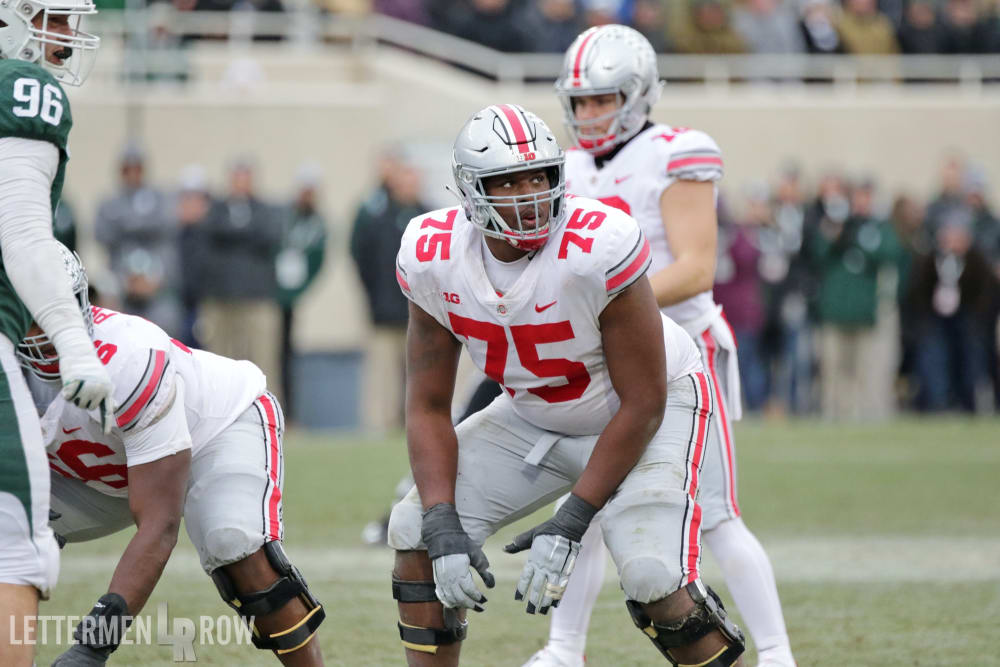 “I don’t think we played great either at times,” Ohio State coach Urban Meyer said. “But then other times, to finish the game we did, against that defense, no one’s done that to them. No one’s done it against a team that you know how much respect I have for that coach, that staff and that place.

“That was awful. That was a tough environment. … I think we can play a little bit better. But that was a rugged day, now. That was not exactly where we need to be, but I think I am satisfied with where we’re at.”

There is still room to grow for the Buckeyes, even at this late juncture in the season. And with that potential for improvement, it’s been fair to wonder at times if personnel changes should be considered along with the schematic adjustments the coaching staff appears to be making to put the linemen in better position to impact the game.

With both of those thing in mind, former Ohio State offensive lineman Reid Fragel returned to the Lettermen Row film lab to take a look at the work going on up front, what differences he’s seen lately and any potential tweaks that may needed in the latest episode of BuckIQ. With two big tests remaining for the Buckeyes, there’s no time to waste.