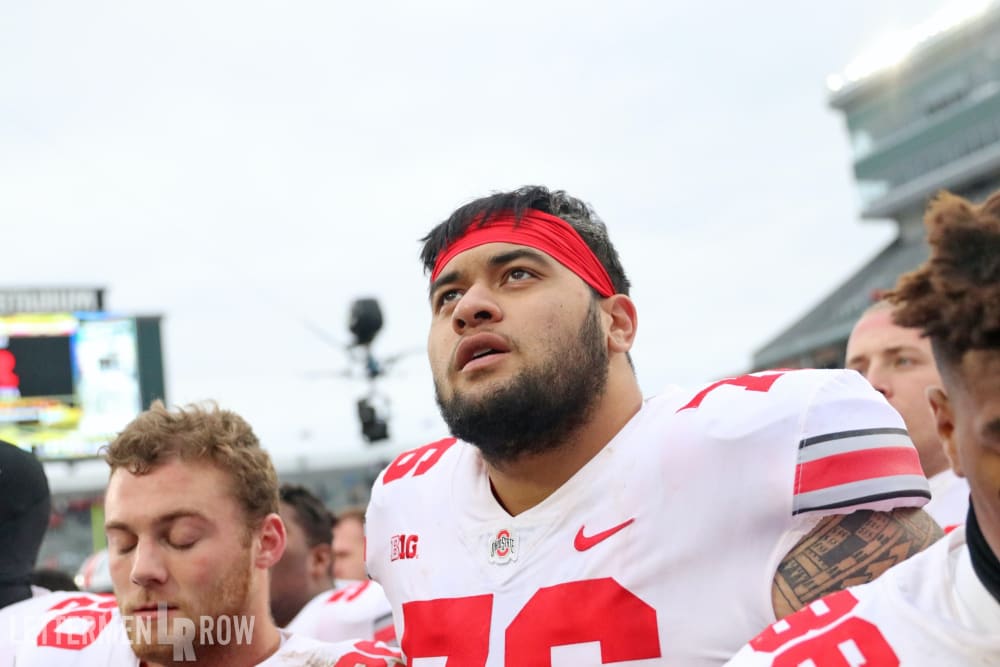 Ohio State guard Branden Bowen has been back in uniform and could be an option on the offensive line. (Birm/Lettermen Row)

The speculation, debate and conversations about Ohio State never end, and Lettermen Row is always ready to dive into the discussions. All week long, senior writer Austin Ward will field topics on Urban Meyer and the Buckeyes submitted by readers and break down anything that’s on the minds of the Best Damn Fans in the Land. Have a question that needs to be tackled, like the one today about the Ohio State offensive line? Send it in right here — and check back daily for the answers.

I think, if he’s healthy, Bowen has to get in for MP…and this is the week it has to be done if it’s going to be done. Allowing sacks, two drive killing penalties, one leading to missed fg. Thoughts on interior line?

Spots don’t get much trickier than the one Ohio State finds itself in right now on the offensive line with just two regular-season games left and a Big Ten title within reach. There were certainly encouraging signs for the Buckeyes on that unit in the physical, grueling win over Michigan State and its dominant rush defense, and three blockers finished as champions — but that obviously means two of them didn’t.

Problems on the interior of the line aren’t exactly new for Ohio State this season, but the coaching staff is clearly torn about making personnel changes at this late stage and potentially disrupting the chemistry — or relying on either an inexperienced option or one coming off multiple surgeries. At some point, though, the Buckeyes won’t be able to withstand some of the breakdowns in the heart of the attack, and snap issues again popped up and produced a costly fumble deep in the red zone.

So, does Ohio State need to make a move to get either Branden Bowen or Wyatt Davis in at guard? Is Brady Taylor healthy enough to allow the Buckeyes to make another swap and allow Michael Jordan to slide back to his natural position? Whatever it decides, the clock is ticking loudly, because there’s no way Ohio State is going to make a move against Michigan’s ferocious defense without at least kicking the tires against Maryland on Saturday first.

“Probably no [changes] right now,” Ohio State coach Urban Meyer said. “I think we can play a little bit better. That was a rugged day now.

“It’s not exactly where we need to be. But I think I am satisfied with where we’re at. The next guy in would be Wyatt Davis.” 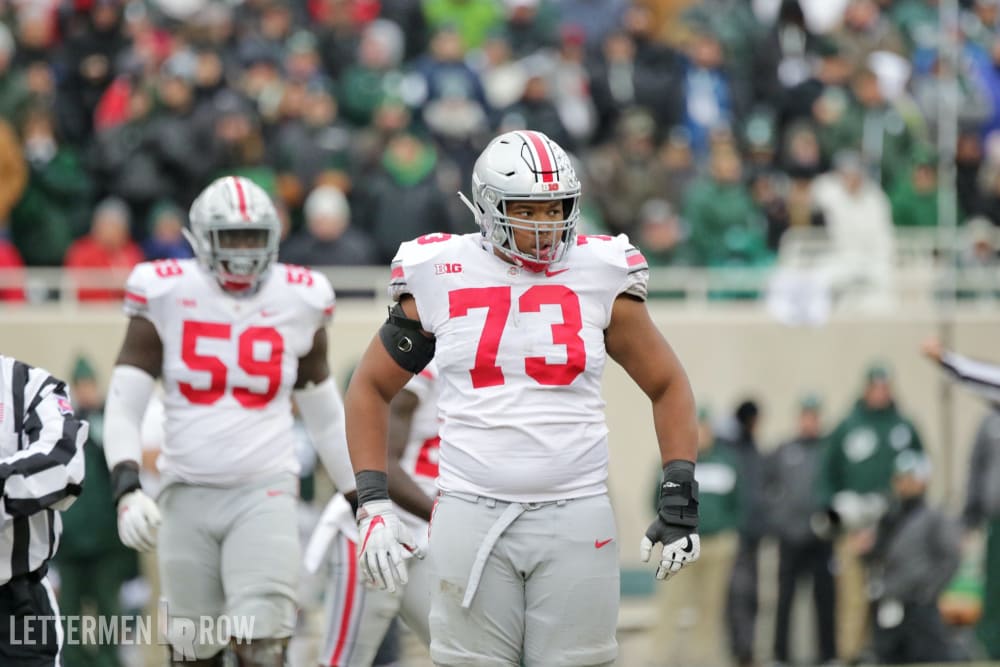 Ohio State got a win at Michigan State, but the offensive line still had a few breakdowns. (Birm/Lettermen Row)

If Ohio State isn’t going to shake up the starting lineup, it probably at least needs to give some consideration to allowing Davis and potentially Bowen to get meaningful reps just to make certain they could help in The Game. And it could also turn into a situation like at safety with Brendon White where throwing a talented new guy into the mix can produce unexpected results.

Maryland represents another decent challenge for Ohio State and that group of linemen, coming into the weekend ranked No. 30 in the country in total defense. The Terrapins have enough athletes to provide another significant measuring stick in those key positions up front. And if the Buckeyes are struggling at all with any of the issues on the interior it has seen lately, they had better not hesitate to find out if there are better options waiting in the wings.

They’ve obviously made it this far with that group, so it’s understandable why the Buckeyes don’t really want to make significant changes. But if Ohio State isn’t playing at a championship level across the board on that unit, it’s also running out of time to fix it.