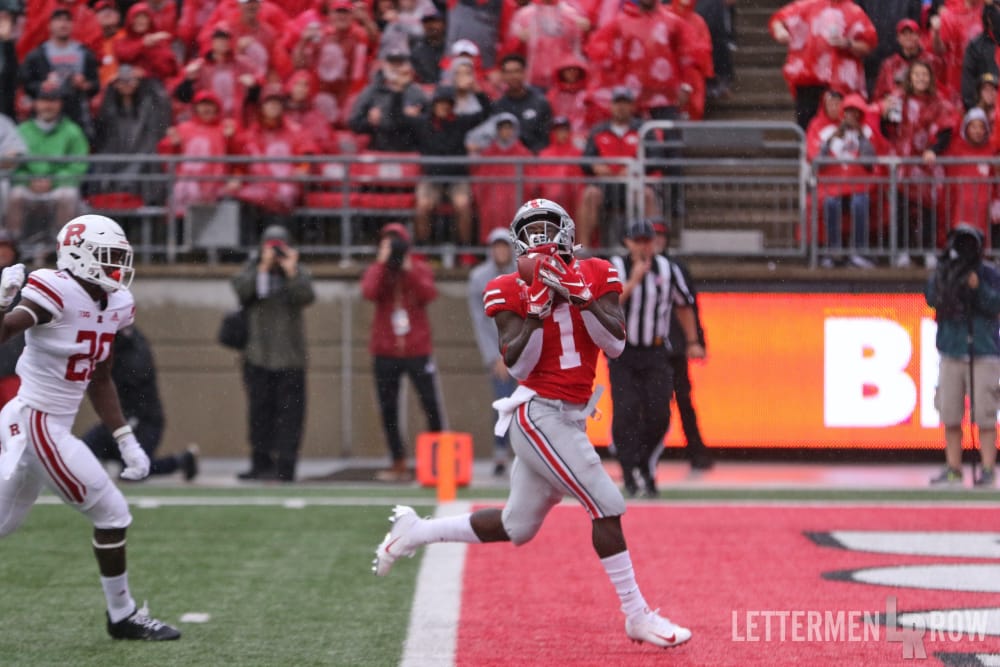 Johnnie Dixon hauls in a touchdown for Ohio State in the blowout over Rutgers. (Birm/Lettermen Row)

COLUMBUS — Calling the Ohio State offense fun might be underselling it.

The Buckeyes have a legitimate, championship-caliber attack now, and terrifying is probably a better word for it at this point.

It’s early, yes. Oregon State and Rutgers also aren’t in danger of being compared to Alabama or Clemson any time soon. And, of course, there’s always the potential for dominant, high-powered starts to get derailed over the course of a long season.

But Ohio State has served notice through two weeks of at-will scoring that it has finally found the key to the next offensive level, and good luck to any defense waiting on the other side of the door trying to stop it.

“I think we have a great group of guys here,” acting Ohio State coach Ryan Day said. “We have a lot of talent on offense, and I think that combined with the tempo has been great.

“You don’t know who is going to get the action. But when you have a team of players and you don’t care who gets the attention, that’s when you can be a special group.”

However Ohio State wants to describe the offense right now, it’s hard to argue with the results after cruising to another blowout that just showed how destructive it can be in a 52-3 win over Rutgers on Saturday at the soggy Horseshoe.

Want to see a deep ball? Even the persistent rain couldn’t do anything to dampen the wick for the rocket-powered right arm of Dwayne Haskins. The redshirt sophomore has already thrown 9 touchdowns in two starts, and a Heisman Trophy campaign is officially underway already.

Powerful rushing attack? The Buckeyes can unleash one with either J.K. Dobbins or Mike Weber without missing a beat, with the terrific tailback tandem combining for 100 yards between them in a game where they were hardly needed. 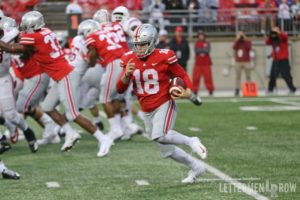 Tate Martell put up more than 200 yards off offense and two touchdowns off the bench for Ohio State. (Birm/Lettermen Row)

Tight ends are catching touchdowns. Ohio State is unveiling end-arounds, pop passes and jet sweeps seemingly just for the sake of variety. And when it feels like getting even more nutty, it turns the offense over to backup Tate Martell and lets him improvise new, electrifying ways to pile up yardage and score touchdowns.

“Obviously Dwayne is our starter. That’s how it is. And I’ll be there if something goes wrong.”

If there are any flaws with this Ohio State offense, it’s hard to see them right now.

The Buckeyes have revamped the line seemingly on the fly, but Haskins has rarely dealt with much pressure he couldn’t handle.

There was the possibility of egos clashing in the backfield, but the Buckeyes have devised a system that allows both Weber and Dobbins to generally take turns based off drives. That gives Ohio State the ability to push the pace while also allowing for a balance between staying fresh and finding a rhythm for the rushers.

Even the overflowing amount of talented skill players hasn’t been an issue, with the Buckeyes spreading the ball around to 10 different targets even in the wet conditions against the Scarlet Knights.

“It’s a whole lot of fun,” Haskins said. “It’s like every series there’s an opportunity to go score, whether that’s me throwing it, me running it or giving it to somebody else to do something with it. It’s a lot of fun.

“I’m very excited. The team’s very excited. We’re going to use this week as a great preparation for TCU on Saturday, and we’re ready for them.”

A tougher test for the Ohio State offense and its title-worthiness is coming now.

But nothing the Buckeyes have shown so far would suggest they’re heading for anything other than a lot more good times.