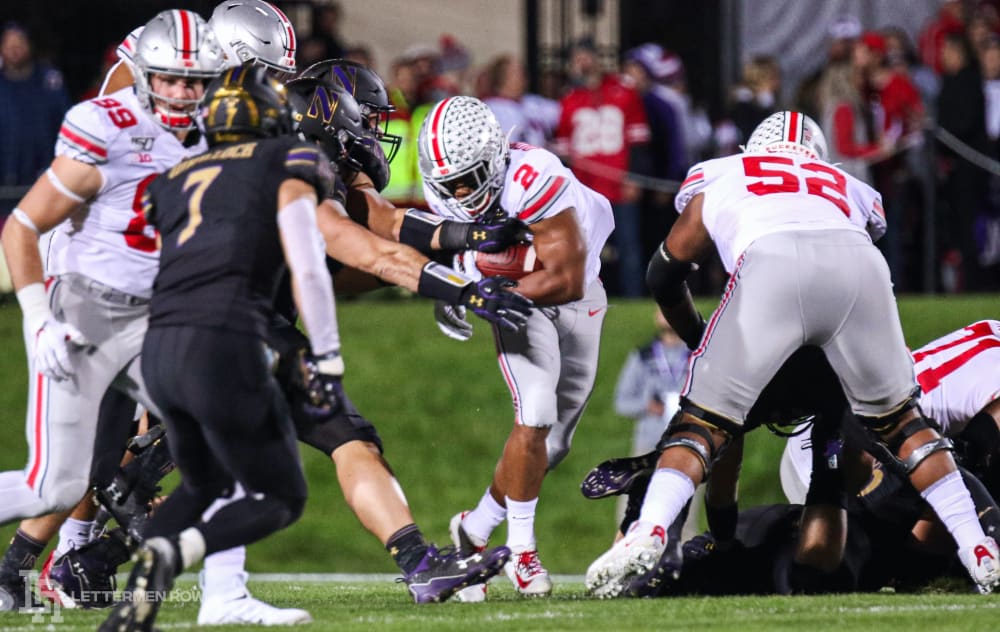 Ohio State and running back J.K. Dobbins have a head of steam heading into the Wisconsin game. (Birm/Lettermen Row)

The Buckeyes didn’t need a full 24 hours to revel in another dominant outing. Their party lasted about 15 minutes and was done by the time the final seconds ticked away in a Friday night massacre at Northwestern.

Chase Young had his helmet off and was pretending to be a member of the marching band during the fourth quarter. Damon Arnette was unleashing wild celebrations after every big play from the reserve defensive backs. Just about every starter took turns busting out some dance moves before greeting the traveling fans who stayed for the finishing touches of a 52-3 blowout at Ryan Field.

And then Ohio State started talking about making corrections, turning the page and throwing every bit of its considerable might into getting ready for the massive showdown next week against Wisconsin.

“You know, the job isn’t finished,” Young said. “My mindset is immediately on Wisconsin. And I feel like that’s what all the leaders on this team are going to do, we’re going to pull the young guys with us.

“We already talked about Wisconsin with [strength] Coach Mick [Marotti] on the sideline during the third quarter. Our focus is definitely shifting.” 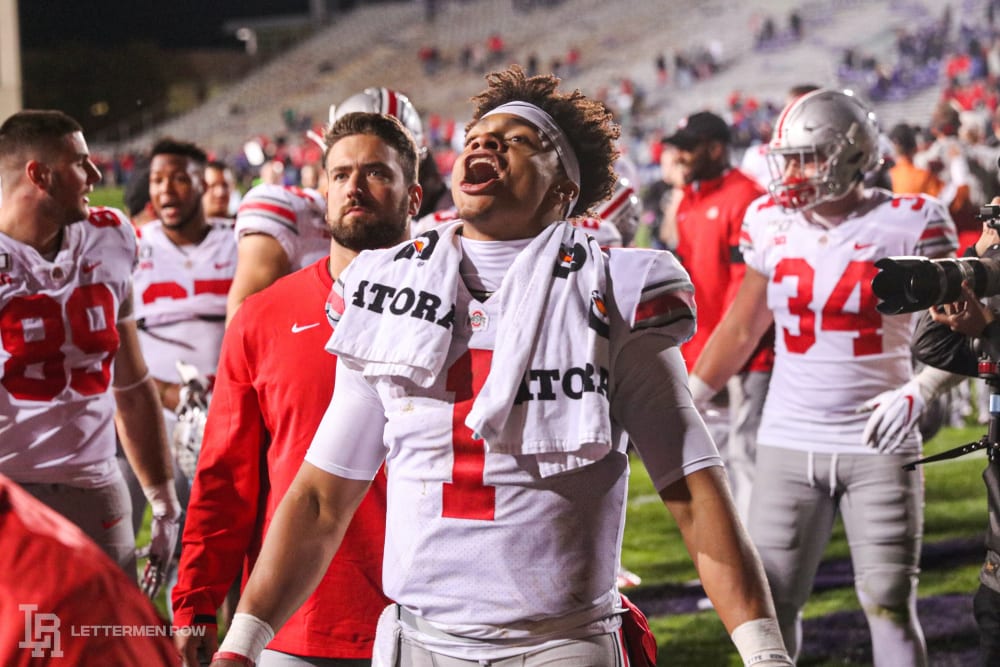 It’s now safe for the Buckeyes to put their full attention on the Badgers and a potential Big Ten Game of the Year next week in the Horseshoe. And while they’ve done a remarkable job of treating every single opponent like they’re the only one that matters so far this season, it’s pretty obvious already that they’ve been waiting for a chance to truly measure themselves in a meaningful matchup.

Given the dangerous balance of the high-powered offense, the amazing turnaround of the Silver Bullets and the absurd collection of talent that seems to be getting deeper every week, it’s possible that even undefeated, top-six Wisconsin might find itself outmatched. Right now, it’s hard to envision anybody in the league slowing down the Buckeyes, and maybe the streak of comfortable wins will be extended by a program that is making it look comically easy.

Can anybody slow down Justin Fields given his improving command of the offense, his uncanny knack for extending plays and deadly accuracy as he comes off another four-touchdown performance? Who has the answer for J.K. Dobbins and the ground game if a solid Northwestern defense couldn’t even contain the Buckeyes despite a banged-up offensive line? As if that wasn’t enough, Chris Olave, Austin Mack and Garrett Wilson all took steps forward as part of a truly dangerous collection of weapons at wide receiver.

Keeping pace with the Buckeyes on the scoreboard is hard enough just based on how quickly it can explode, which it did again with another huge second quarter, this time a 24-point outburst that ended the drama by halftime. But that gets even more complicated when Ohio State is unleashing perhaps the most dominant pass rush in the country, which is setting the table for a loaded, play-making secondary. Just about the only flaws for the Buckeyes on Friday came from a handful of decent gains given up on the ground, but they still held Northwestern to 3.3 yards per attempt without the services of linebacker Baron Browning — who is expected to return next week. 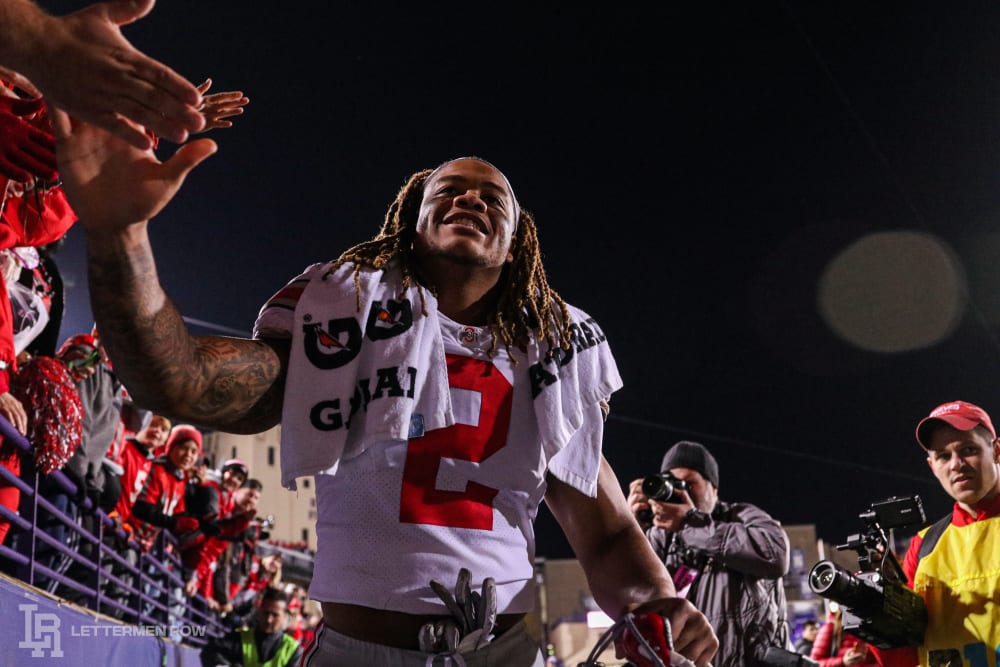 It’s obvious that Northwestern isn’t the same team that won the West Division last year before losing to Ohio State in Indianapolis. But that doesn’t make it any less impressive that the Buckeyes could go on the road and essentially turn the second half into an audition for the backups and a party for the starters.

“We tried to really focus on one week at a time,” Ohio State coach Ryan Day said. “I think we feel good about the way we came out of the bye week with energy, starting fresh and refocusing on the things that matter within the program. Now we know we have a huge challenge next week.

“We’re going to get on that plane, enjoy this, catch our breath, we’ll get in late tonight and then we’ll start our preparation for Wisconsin.”

Thanks to the rare Friday-night game, the Buckeyes were always going to have an extra day to begin that process. But they also found a way to squeeze a few extra minutes for it by getting all the heavy lifting done in a hurry against the Wildcats.

That’s not as easy as it sounds, and the Buckeyes deserve credit for the way they have turned every week into a chance to prove to themselves that they’re best team in the country. It’s hard to argue with the case being built at this point.

But after talking themselves into a bunch of tests during the first seven games, a real one is finally coming. And Ohio State can’t wait.

“We know what we have in store there, so it’s going to be a really tough week,” Day said. “Tough preparation, tough game, but I know the kids are going to be excited to play it.”

At the rate they’re going, don’t be surprised to see a bunch more smiles on the faces of the Buckeyes next week, too.