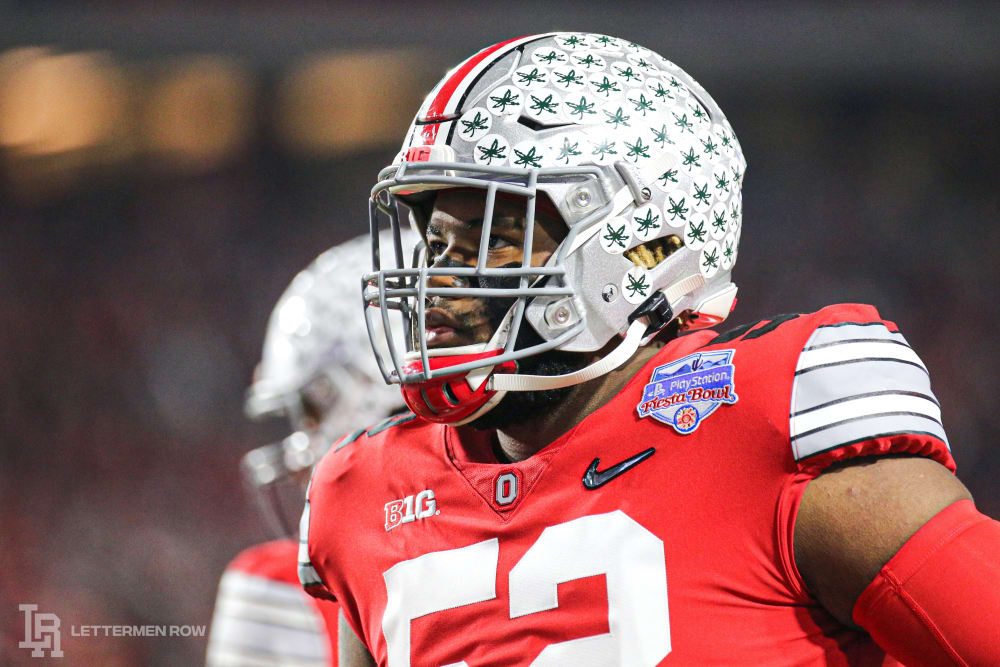 Wyatt Davis was selected by the Minnesota Vikings in the third round. (Birm/Lettermen Row)

COLUMBUS — Only one Ohio State product heard their name called in the opening round of this past weekend’s NFL Draft.

The lone selection snapped the Buckeyes streak of multiple first-round picks in five-consecutive drafts. Even with only Justin Fields being picked in the first round by the Chicago Bears, Ohio State finished the draft with 10 players drafted and five signed to undrafted free-agent contracts.

To have 10 players selected is proof of why the program made the national championship this past season. But the Buckeyes consistently produce top-tier NFL talent, showing the program’s overall strength. Urban Meyer set the standard of excellence;Ryan Day hasn’t missed a beat moving the bar forward.

Ohio State tied Alabama for the most-draft picks of any school in the NFL Draft over the weekend. The Buckeyes expanded on some records and are in position to join some rare company in next year’s draft. Lettermen Row is breaking down some of those records and examining how Ohio State can add to them next season. 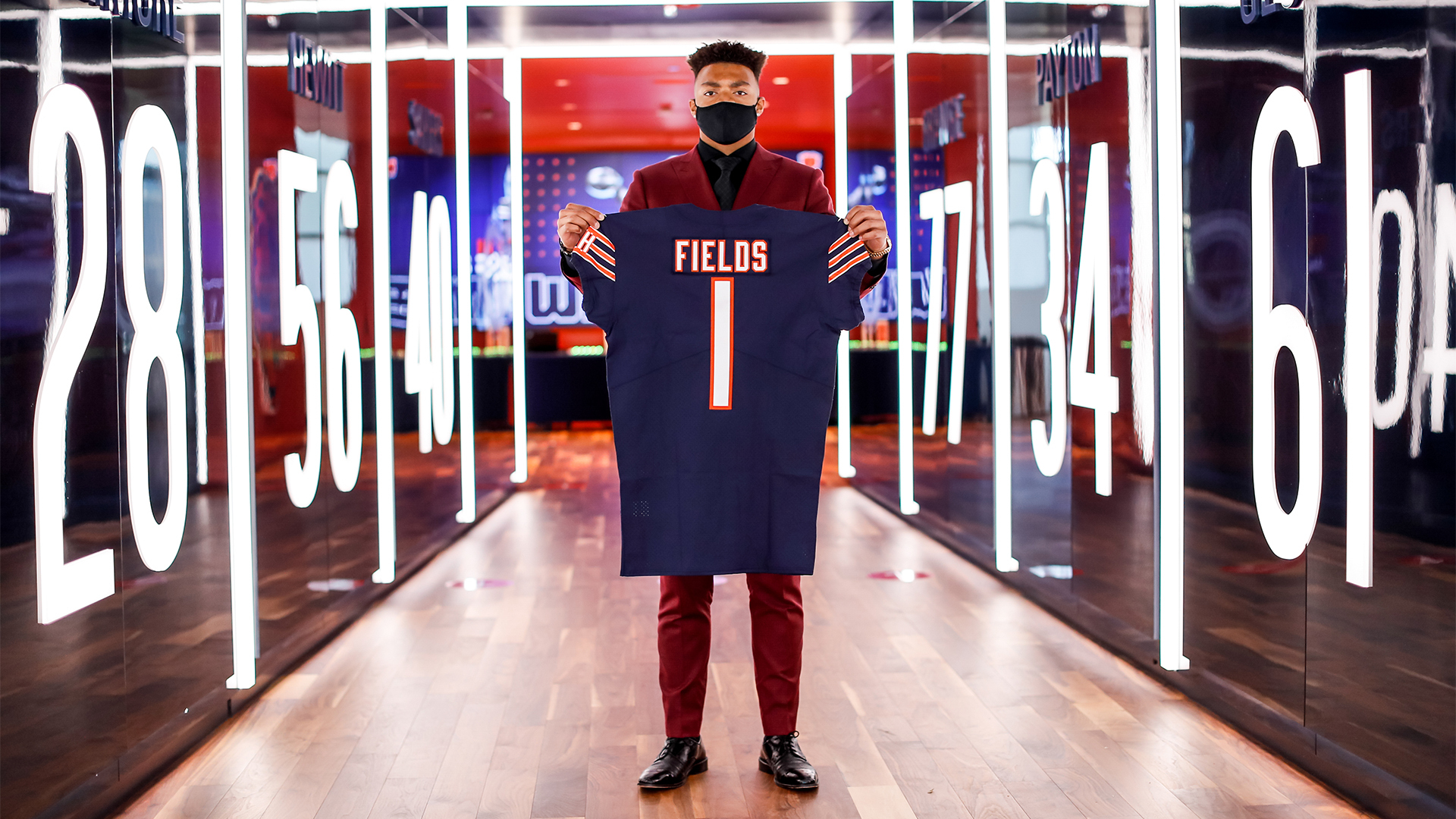 Justin Fields was drafted in the opening round by the Chicago Bears. (Chicago Bears/Twitter)

The Buckeyes have now had 10 selections in two-consecutive drafts. If they can pull off double-digits in 2022, they will become only the second team to have a streak of three-straight drafts of 10 or more picks. Only one school has done that since the NFL’s current seven-round format was instituted in 1994 — Alabama from 2017 to 2019. Hitting the milestone is completely feasible for Ohio State. Garrett Wilson, Zach Harrison, Thayer Munford, Sevyn Banks and Chris Olave each could be first-round picks next year. Add Tyreke Smith, Jeremy Ruckert, Marcus Williamson and Haskell Garrett into the mix, and the Buckeyes are at the 10 needed players. Sprinkle in some possible juniors who have stellar seasons who choose to declare for the draft, Ohio State could be looking at one of its largest draft classes in recent memory. Reaching the three-peat would be quite the accomplishment for the Buckeyes. Even reaching this rare air, however, is impressive. Ohio State now joins Alabama and USC as the only three schools to ever hit double-digits in two-straight years.

Buckeyes have most picks in Big Ten since 2010

The Big Ten Championship Game has been played every year since 2011. The Buckeyes have won five of those titles, including the last four. The reason for all those championship rings lies in the stockpile of NFL talent Ohio State has recruited and developed. The Buckeyes have now had 82 players selected in the draft since 2010, 27 more than their closest competition, Michigan. With Justin Fields selection in the opening round, Ohio State now has 19 first-round picks since 2010, too. No other program seems to be catching up with the Buckeyes on the field or in the draft standings, either. They’re not going to slow down for the rest of the Big Ten, though, they just put together the No. 2 recruiting class in the country. 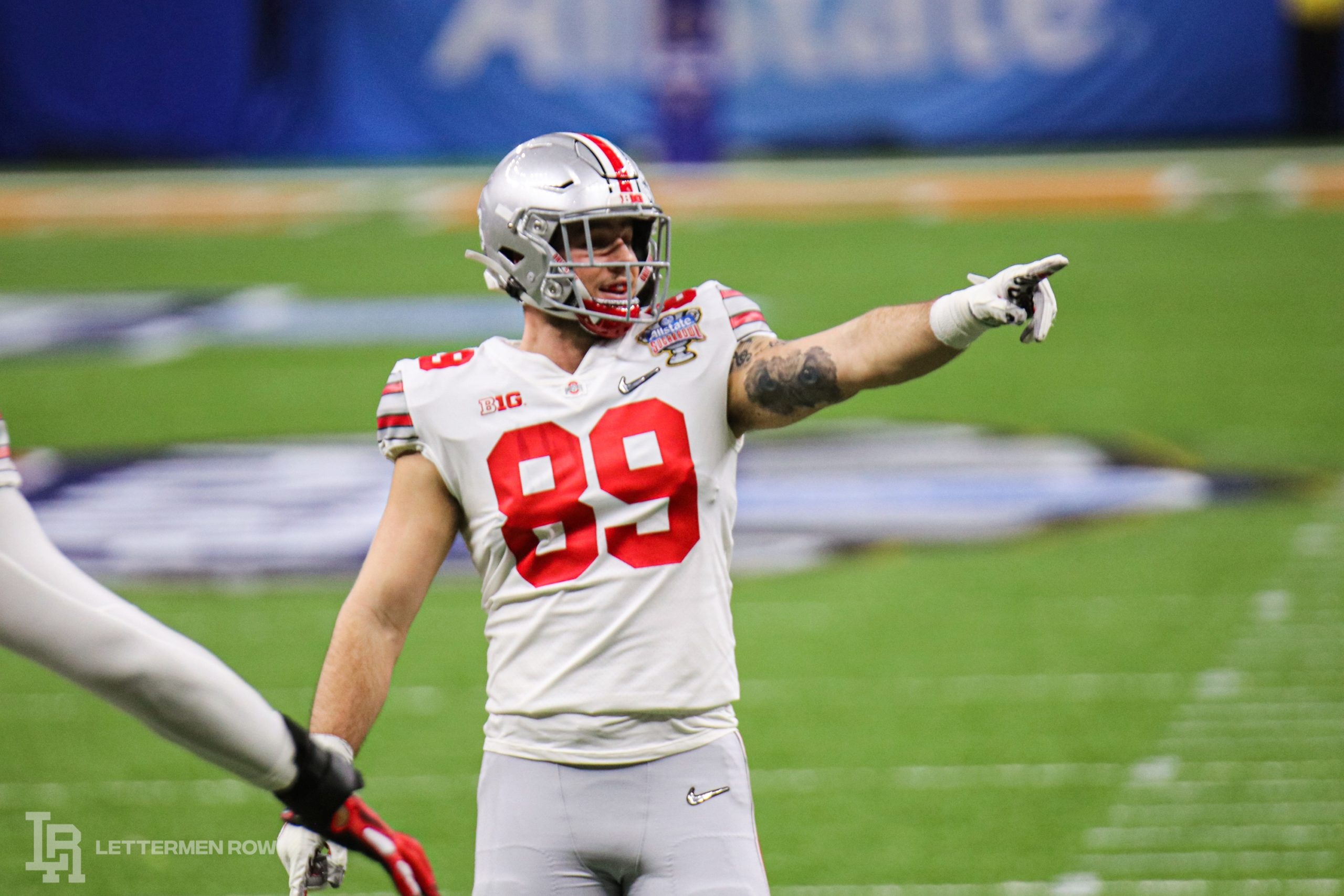 Luke Farrell brings elite blocking skills with him to the NFL. (Birm/Lettermen Row)

Ohio State still has most draft picks since 2000

Alabama might have tied with Ohio State for the most picks in this year’s NFL Draft over the weekend, but the Crimson Tide still aren’t even close to touching the most draft picks since 2000. The Buckeyes have seen 151 players selected in the draft since 2000, 14 more than Alabama. As long as Ohio State continues to develop and produce players at a constant pace, it will continue to hold that edge on the Crimson Tide.