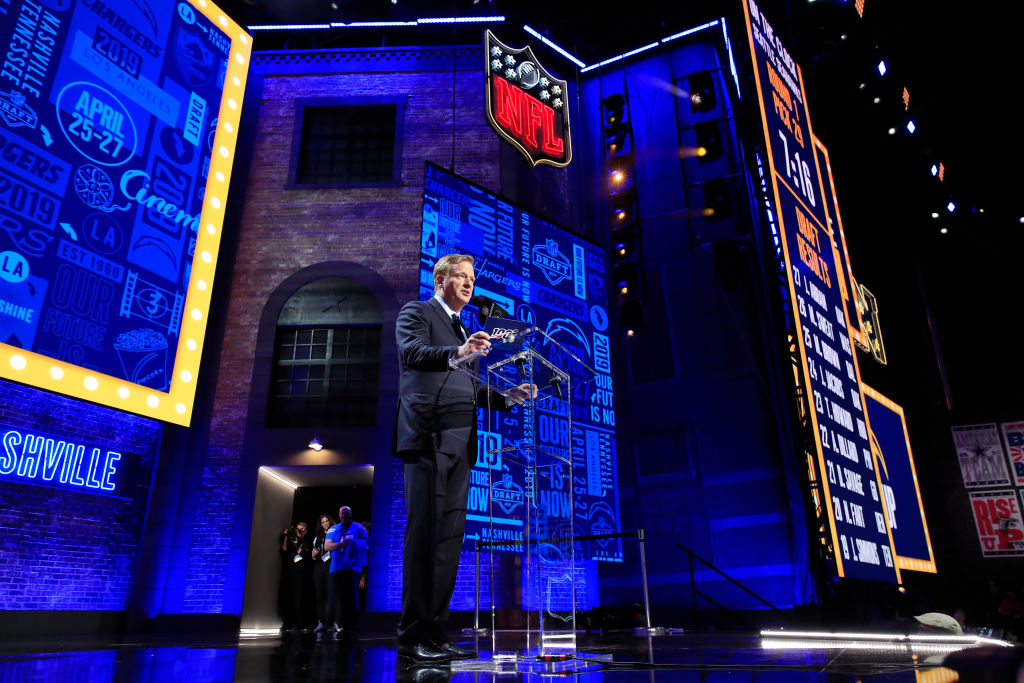 COLUMBUS — The Justin Fields landing spot speculation will come to an end when the NFL Draft opens Thursday night.

The former Ohio State quarterback will hear his name called at some point in the opening round. Fields has moved up and down draft boards ever since the end of last season. ESPN analyst Mel Kiper Jr. has him ranked as the second-best quarterback in this class. Others think he could be the fifth player at his position taken off the board.

His character, arm accuracy and decision making have all been questioned. Just last week his medical records were leaked. To say he’s had unfair treatment in this draft cycle is an understatement. And those who know him best have spoken out against Fields’ critics, too.

“Yeah, there’s a lot of talk out there, and I guess maybe they think they know him better than I do,” Day said earlier this month. “When I think of Justin Fields, I think of somebody who got off the field against Clemson and for the next year just grinded towards getting back to that same situation and winning that game. It started with the offseason. He got in here and he was one of the hardest workers in the weight room with Mick. Then it went to the quarantine, and during that time, [strength coach] Mick Marotti actually said that [Fields] inspired him. Justin Fields inspired Mick Marotti. He changed his diet. His work ethic was off the charts. He came in here in great shape. Then we get here and the preseason gets canceled, the season gets canceled. He doesn’t opt out and go to the NFL Draft. Some guys did. 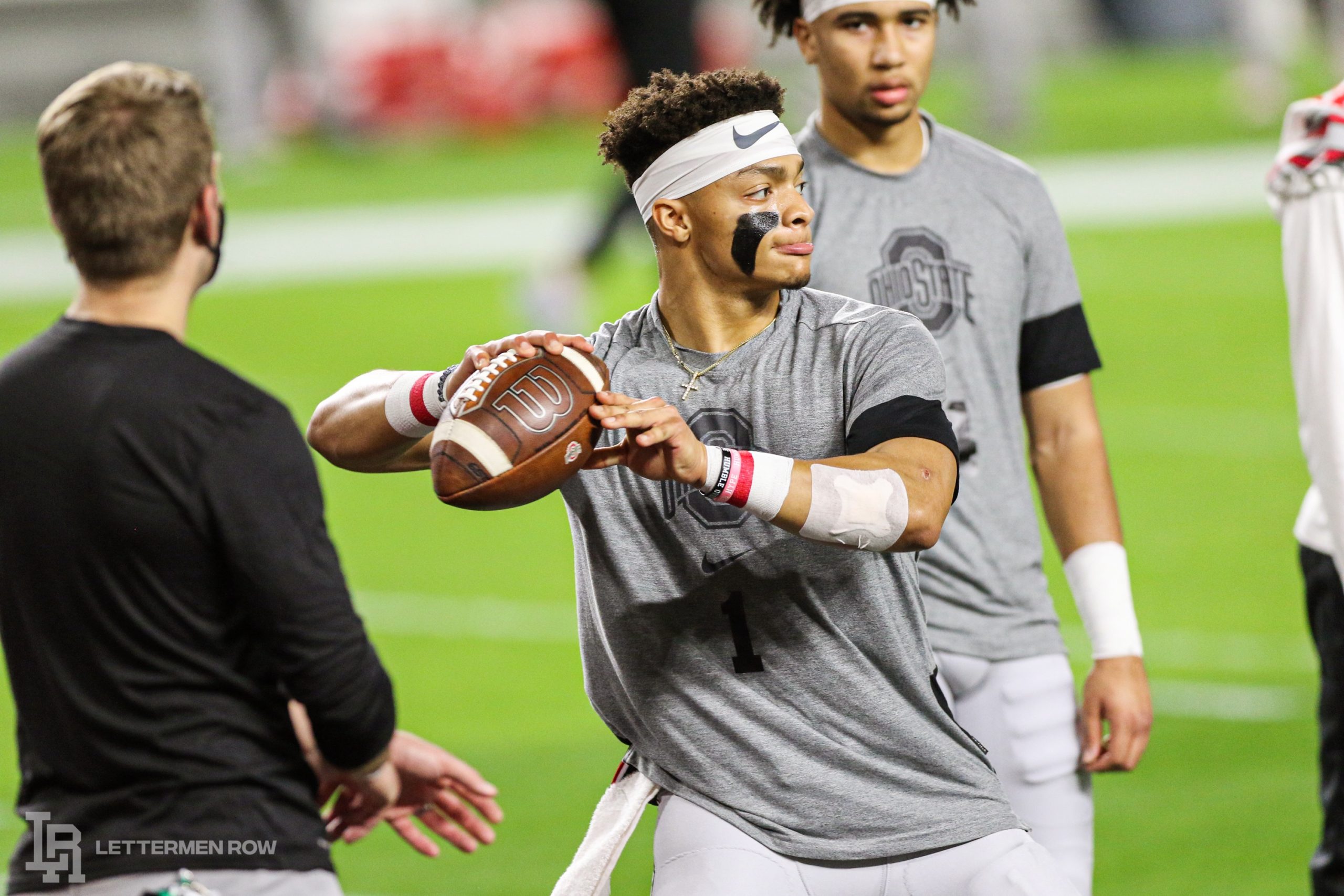 “So, I’ve heard all kinds of different things, I don’t know what people have said and what they haven’t. I read stuff on my phone, I don’t quite understand any of that stuff. Love for football? There are a lot of guys who opted out. Are they saying the same things about those guys who didn’t want to play? Now, not only does he not opt out, he fights to get the season back. He has a petition, he goes on national TV and fights to get the season back. Then he comes out and plays — and plays really well.”

Odds are strong Fields will be the only Ohio State product taken in the first round, but Pete Werner’s stock is reportedly rising, which could push him into the top round.

If there’s anything known, though, it’s that this year’s draft will look a lot more normal than last year. NFL commissioner Roger Goodell will be announcing picks live from downtown Cleveland as opposed to his basement like last year. Thirteen prospects will be in town to walk across the stage and hold up their jerseys next to Goodell. Fields and Wyatt Davis along with 43 other prospects have been confirmed to participate virtually in the draft.

For anyone keeping track of the Buckeyes in the draft on TV or listening to the radio, Lettermen Row has all the viewing information that could possibly be needed to not miss a moment this year’s edition of the NFL Draft.

Fourteen former Ohio State players could hear their names called later this week. The Buckeyes have the most first-round picks of all time with 84, while USC has 82. And Ohio State has had 72 players drafted into the league since 2010. The next-best Big Ten school is Michigan, which has had 47 players drafted in that timespan.

What TV channel is the NFL Draft on?

ESPN, ABC and the NFL Network will all provide coverage of the draft.

ABC will have a college-centric broadcast, taking the College GameDay crew from ESPN. Rece Davis and Maria Taylor will co-host with Kirk Herbstreit, Desmond Howard, Todd McShay, Jesse Palmer and David Pollack breaking down every pick.

On Saturday, ABC and ESPN will merge their coverage on the two channels. Davis will host and be joined by Kiper, McShay, Riddick, Mortensen and Schefter.

How can I watch the NFL Draft online?

The draft will be streamed on the ESPN app and the NFL Mobile app.

Is the NFL Draft on the radio?

SiriusXM, Westwood One, and ESPN Radio will all have coverage of the draft. On ESPN Radio, Dari Nowkhah will host with former NFL general manger Mike Tannenbaum and Bart Scott (Day One and Two), draft analyst Jim Nagy (Day Three) and reporter Ian Fitzsimmons.

No. 1 Jacksonville Jaguars
No. 2 New York Jets
No. 3. San Francisco 49ers (from Houston through Miami)
No. 4 Atlanta Falcons
No. 5 Cincinnati Bengals
No. 6 Miami Dolphins (from Philadelphia)
No. 7 Detroit Lions
No. 8 Carolina Panthers
No. 9 Denver Broncos
No. 10 Dallas Cowboys
No. 11 New York Giants
No. 12 Philadelphia Eagles (from San Francisco through Miami)
No. 13 Los Angeles Chargers
No. 14 Minnesota Vikings
No. 15 New England Patriots
No. 16 Arizona Cardinals
No. 17 Las Vegas Raiders
No. 18 Miami Dolphins
No. 19 Washington Football Team
No. 20 Chicago Bears
No. 21 Indianapolis Colts
No. 22 Tennessee Titans
No. 23 New York Jets (from Seattle)
No. 24 Pittsburgh Steelers
No. 25 Jacksonville Jaguars (from Los Angeles Rams)
No. 26 Cleveland Browns
No. 27 Baltimore Ravens
No. 28 New Orleans Saints
No. 29 Green Bay Packers
No. 30 Buffalo Bills
No. 31 Baltimore Ravens (from Kansas City Chiefs)
No. 32 Tampa Bay Buccaneers