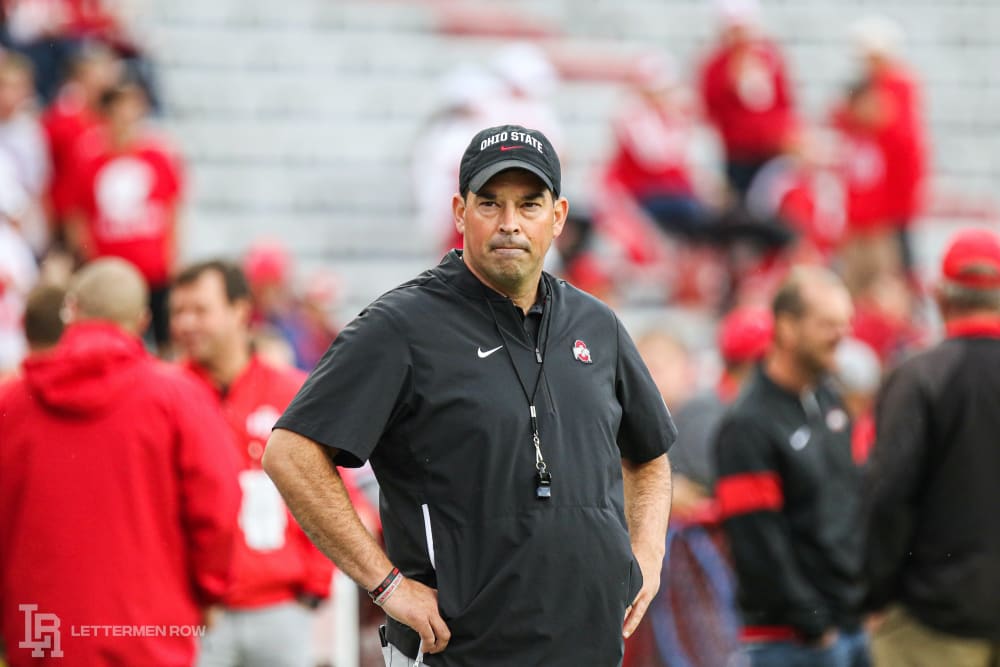 COLUMBUS — The next challenge for Ohio State would surely stand as the biggest so far, with or without a history lesson.

But Ryan Day isn’t going to leave any possible motivation for the Buckeyes up to chance, so there will be at least a couple reminders of just how much damage Michigan State has done to the national-title chances for the program over the years.

That message was delivered first before practice on Tuesday. And while the exact conversation will remain behind closed doors, it’s certain to have included references to at least two season-wrecking losses that the Spartans have inflicted since 2013 as a helpful reminder to keep the Buckeyes focused on the task at hand on Saturday night in the Horseshoe.

“I feel it’s important to understand what you’re getting into every week, every week is a whole new season — and [that history] matters, I think,” Day said on Tuesday. “It’s the coaching staff we’re going against. It’s Michigan State. It’s the people. It’s everything. It’s important to know the history of the two teams, and when they’ve played, what’s happened and what you’re up against each week.

“I really think that’s important to teach these kids. They’re 18, 19, 20 years old. Some of them don’t even really understand the history. I think it’s good for them to hear that and understand that and know what they’re getting into each week. So we do that. It starts with the team meeting [Tuesday] … and then we kind of hammer that message throughout the week.”

The Buckeyes haven’t really needed much extra incentive to play their best so far this season, particularly since Day has helped cultivate a team-wide approach in proving that the program in the best in the country each and every week regardless of the opponent.

But over the course of a long season, it does occasionally help to have a new carrot to dangle in front of a team. And Ohio State certainly has that this week with a ranked opponent and some historical bad blood with the Spartans to serve as fuel during practice ahead of the Big Ten East Division matchup. Before the Buckeyes hit the practice field, here’s what Lettermen Row learned from the afternoon media session with Ryan Day and a handful of key players.

Josh Alabi making most of opportunities for Buckeyes

If nothing else, Josh Alabi is giving Ohio State something to think about when it comes to the starting job at right tackle.

For the second time in the last six games, the senior has stepped in for a starter and kept the offensive line rolling without missing a beat. The veteran was perhaps even better on Saturday at Nebraska than he was in the Rose Bowl at the end of last season, though, earning Offensive Player of the Game honors while replacing the injured Branden Bowen. Ohio State hasn’t provided an update on Bowen as he deals with what sources told Lettermen Row was a back injury, but he could face some competition from Alabi once he returns.

“I just always tell myself: Stay the course, things are going to work out,” Alabi said. “It’s tough, and I face battles just like everybody else. It’s not going to be easy, and I tell myself that all the time. Just because stuff is going bad right now or I’m not starting, you still have a job to do and still have a role on this team.

“Just keeping that mindset keeps me locked in. It’s not easy — I obviously want to start, but I know my role.”

In case there was a risk of jinxing his quarterback, Ryan Day gently tapped the podium at the Woody Hayes Athletic Center when the conversation turned to the 116 throws so far from Justin Fields without an interception.

The Buckeyes could have bruised their hands knocking on wood during the press conference as often as that streak came up on Tuesday. But the ability of the sophomore quarterback to protect the football has been one of the most impressive parts of the five-game run so far this season with Fields playing like a far-more-experienced passer and avoiding costly mistakes.

“I think the biggest reason why I haven’t turned the ball over is because Coach Day just puts it in my brain every day in practice,” Fields said. “Take care of the ball, that’s the No. 1 rule of the offense. Take care of the ball. That’s really the Plan to Win.

“When I’m on the field, I’m just thinking about making smart decisions and just really taking care of the ball. Knowing the situation with down and distance, being smart with the ball and playing it out in my mind.”

After just five games as the co-defensive coordinator, Jeff Hafley is already finding himself linked to head-coaching jobs as one of the rising stars in the profession.

That was perhaps inevitable given his resumé as both an NFL and college assistant, a track record of success as a recruiter and the incredible turnaround he’s helped engineer so far this season with the Ohio State defense. But it happened earlier than anybody could have really predicted simply because of the circumstances with Rutgers firing former Buckeyes assistant Chris Ash over the weekend, opening a job back in Hafley’s home state of New Jersey that he was quickly linked to as a potential candidate — along with yet another former Ohio State defensive coordinator in Greg Schiano.

“I’m very happy here. This is truthfully the most fun I’ve had coaching in a long time. I feel reenergized, I love the staff, I love working for Coach Day, I love these players. I love coming to work every day, and I haven’t been able to say that in a long time. But I mean that: This is fun.”

The Buckeyes have one of the best tailbacks in the country playing at perhaps the best level of his career. And part of what has fueled J.K. Dobbins is knowing that he’s not going to be in a truly split backfield sharing carries with what amounted to a co-starter like Mike Weber was last year. But even with Dobbins clearly leading the way, Ohio State isn’t counting on him to shoulder the entire load. And that has made Master Teague one of the most important new threats on the offense as the second-year tailback has firmly established himself as a more-than-capable backup.

Last week, for instance, Dobbins had 24 carries, which allowed him to get into a rhythm on the way to 177 yards. And while that was twice as many attempts as Teague, giving 12 carries to somebody else in key situations also helped keep Dobbins fresh.

“I think he’s running hard. I think he’s downhill. When he sees it, he’s rolling. So, with the different schemes that we’re doing, I think it fits his style really well. It may not be pretty, but he’s pouring it up in there. And he’s practicing. There was a time there in the spring and the preseason he wasn’t practicing, so that’s hard to get better.”