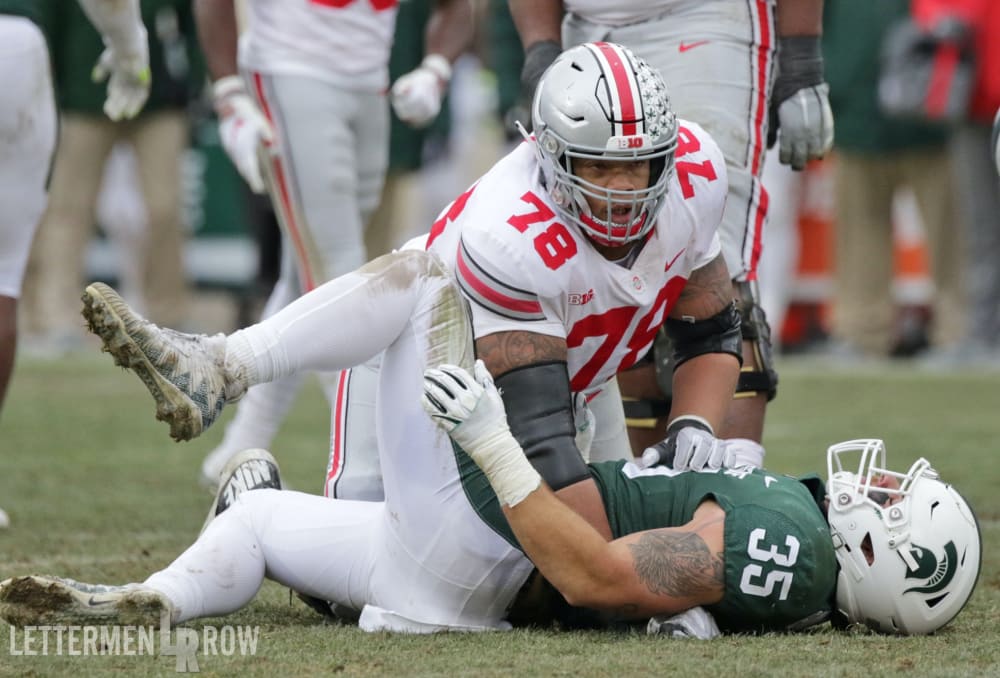 The leadership arrived to set the tone with the captains doing whatever it took to get the job done. Against the top rushing defense in the nation, the Buckeyes proved they could still run the ball and get tough yards. And the Silver Bullets delivered one of their finest performances of the season, refusing to allow even a single touchdown.

And now Ohio State is one huge step closer to potentially defending its Big Ten championship as some eyes are likely to start peeking ahead at The Game after Urban Meyer watched his team solidify its status as a legitimate contender on Saturday at Michigan State.

Buckeyes 26, Spartans 6. Maybe it wasn’t always pretty, but in the end that scoreline speaks volumes about Ohio State.

What else could be gleaned from that impressive victory at Spartan Stadium? Lettermen Row is looking back over it once again before moving on to Maryland Week as we recount What We Learned about the Buckeyes in the cold and on the road to keep pace in the championship race.

Mike Weber is a beast for Buckeyes

The Buckeyes have done their best to split the workload and rotate frequently in the backfield this season, and that’s opened the door to some debate about which tailback should actually be the leader for that unit. There was no question on Saturday who was delivering the toughness, second effort and physical running Ohio State needed against the Spartans, and Mike Weber earned the right to be the closer and put the game away in the fourth quarter. Weber has been the more explosive runner and has averaged more yards per carry than J.K. Dobbins, and he again put his impressive set of skills on display with 104 yards and a touchdown against the stingiest rush defense in the nation. That’s not a knock on Dobbins or his ability to change games, because both are undoubtedly talented. But at least against the Spartans, Weber was giving the Buckeyes a better chance to win. 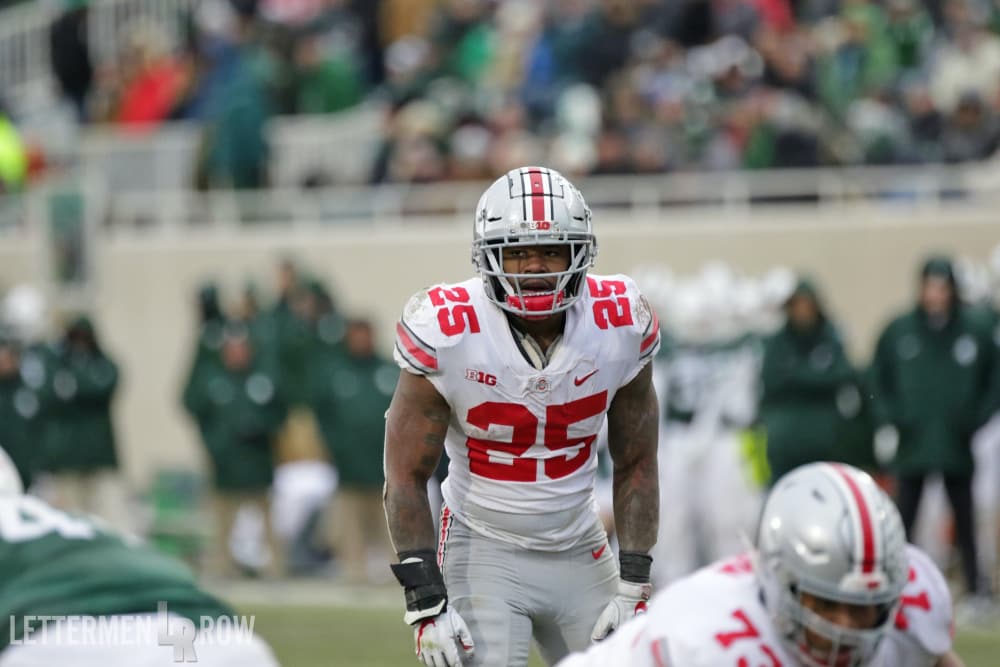 Ohio State running back Mike Weber fought his way to 104 yards and a touchdown at Michigan State. (Birm/Lettermen Row)

Seriously, what took so long for the Buckeyes to realize what they had in the sophomore safety? Obviously not every player develops at the same rate and the coaches certainly have a lot more information available to them on the practice field every day. But it took an injury and an ejection the week before to get Brendon White a full-time role in the secondary, and one week later he was a starter and again one of the best defenders on the field. It’s always better late than never at all, though, and with five more tackles and a pass broken up, White is building momentum right when Ohio State needs it as it pushes for championships.

The Tate Martell package can work for Buckeyes

Some of the same concerns for Ohio State about tinkering too much at quarterback still exist. The Buckeyes are taking their best player off the field, it’s a possible disruption and frustration for Dwayne Haskins and the lack of chemistry or experience can produce turnovers like the botched snap that happened on Saturday. But there is also an upside, as Tate Martell proved with his first chance to come into the game as a red-zone weapon. The carry only went for 5 yards, but in an area of the field where the Buckeyes have struggled at times to generate anything, it represented a significant pickup on the way to setting up a touchdown. Ohio State may still need to be careful about not going overboard with trying to get a more mobile quarterback on the field, but Martell can be an asset moving forward.

Drue Chrisman is a weapon for Ohio State

The Buckeyes are going to need a lot of willpower to avoid thinking much about Michigan this week. Urban Meyer even already slipped up a bit in his postgame press conference when he referenced how important field position in those rivalry matchups featuring great defenses. The Ohio State coach was just trying to make a point about how valuable his punter was against Michigan State in consistently pinning the opponent deep inside its 6-yard line, and Chrisman’s reliability after an early shank was truly remarkable. Ideally for the Buckeyes, that won’t be needed much against Maryland on Saturday. But if another classic Big Ten battle of field position is on deck on Nov. 24, Chrisman might again be one of the most important guys on the roster. 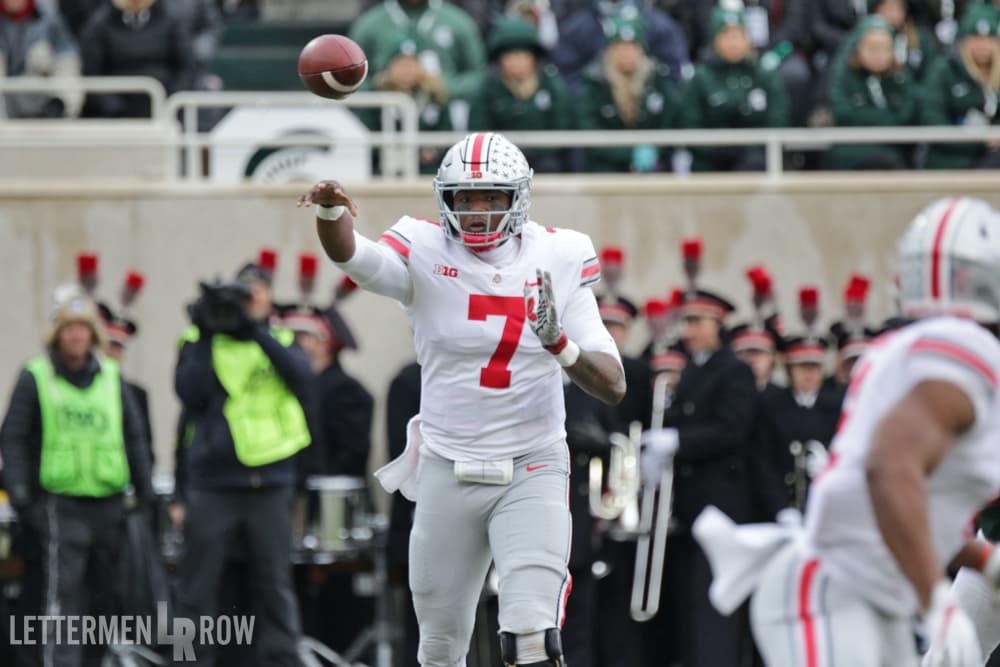 Dwayne Haskins is showing some fire

The Buckeyes aren’t going to throw for 400 yards every week, especially when Dwayne Haskins is under so much pressure in the pocket or trying to deal with cold, windy weather. That’s obviously life in the Big Ten in November, and he showed the toughness again to deal with adverse conditions and keep Ohio State in position to claim a significant victory. Completing 24 of his 39 passes for 227 yards and a touchdown looks modest compared to the kinds of numbers he’s put up this season, but that was actually quite efficient even if there were a couple missed opportunities he’d love to have back. Maybe more important? Even if his best scramble of the season was called back by a penalty, Haskins again showed he could use his legs and would lower a shoulder if need be to move the chains. And his reaction afterward showed just how badly Haskins wants to lead Ohio State to a championship.