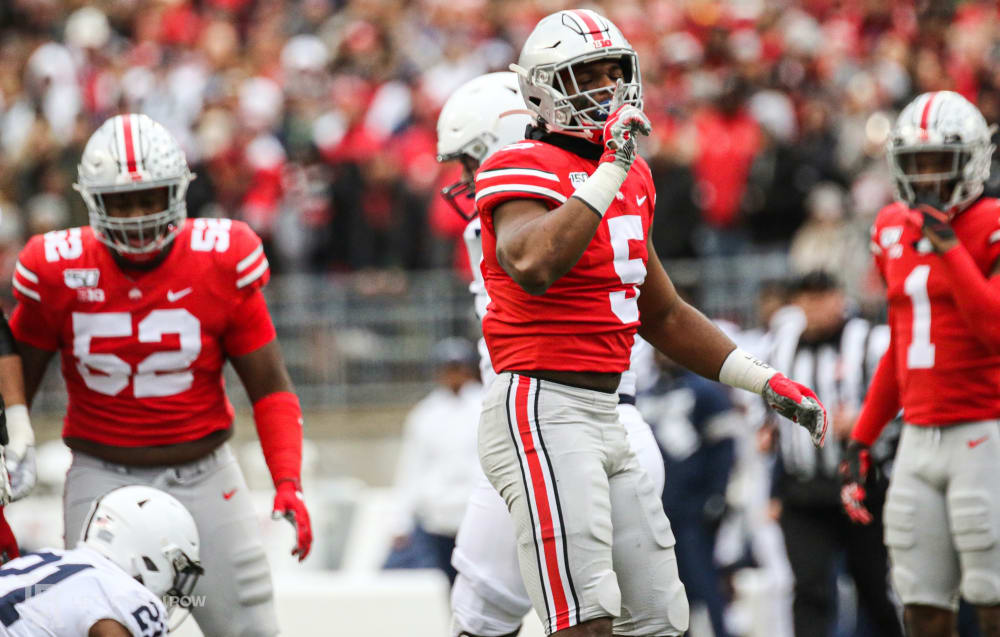 COLUMBUS — Ryan Day has been living the rivalry every day for the last few years at Ohio State, so he doesn’t need an introduction.

The first-year coach is well aware that beating Michigan is a baseline expectation in his job, regardless of what it might mean in the College Football Playoff race.

So, as soon as Day claimed his first division title on Saturday evening after a 28-17 win over Penn State, his competitive juices were already flowing and he was already focused on Gold Pants instead of any other hardware.

“We live it every day,” Day said. “The Team Up North is something that we talk about every single day. And the best way to respect a rivalry is to work it every day. And we do.

“Once this game got over — we’re going to enjoy this one. This was a hard-fought win, a top-10 team, really well coached. But quickly we transition to that rivalry game, which means everything to us.”

There is a twist this time around, though, and it’s a fascinating subplot that Ohio State might not actually need a win as it chases a separate goal of winning the national championship. But when it comes to the greatest rivalry in college football, the Buckeyes won’t accept anything less than extending their run of dominance over the Wolverines. So, with that in mind, Lettermen Row is kicking off Rivalry Week with five questions for Ohio State. 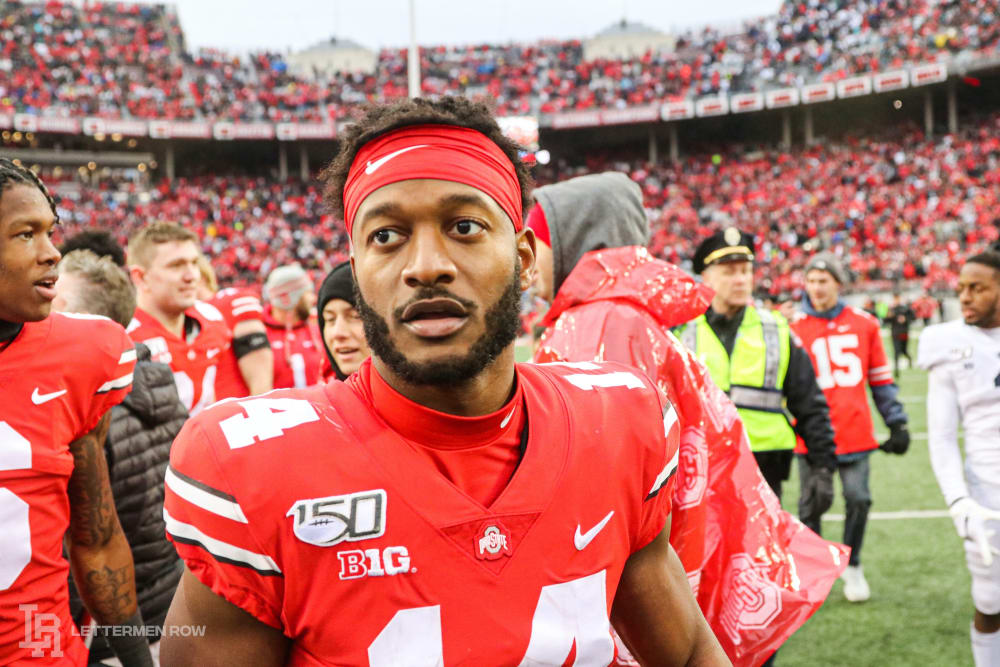 Ohio State wide receiver K.J. Hill will be looking for another pair of gold pants at Michigan. (Birm/Lettermen Row)

How important is The Game to Ohio State?

Obviously that sounds like a silly question since Ohio State spends all year obsessing over its dominance in The Game, which is a huge part of the reason the program has been so successful in it this century. But the Buckeyes have to at least be aware of the fact that they don’t exactly need a win over Michigan to remain in position to go to the College Football Playoff, since the division-clinching win over Penn State and next week’s Big Ten title game will almost certainly be enough to earn them a spot in the field to play for a national crown. There is no chance that Ryan Day would hold anything back against the Wolverines, rest any starters or even acknowledge that the stakes might be diminished this week based on what the program has already accomplished. But it’s still up to the Buckeyes to prove that they’re ready for the Big House this week.

Is Justin Fields healthy for Buckeyes?

The Horseshoe was ready to unleash a full-throated celebration, and then all of a sudden it was eerily silent for two minutes as Justin Fields struggled to get off the turf late in the fourth quarter. Everything seemed to be hanging in the balance for Ohio State as the starting quarterback tried to get back to his feet, and there was no mistaking the relief that washed over the sideline when he got there. In recent weeks, Fields has had his hand stepped on, his ankle twisted, his hip rocked on a big hit and soreness all over his body thanks to grinder any quarterback goes through over the course of a season. Day indicated after the game that everything was fine with Fields, but it’s fair to wonder just how close to 100 percent the sophomore really is heading into The Game.

Ryan Day was intent on establishing a power ground game again this season for Ohio State, and he clearly wanted to lean on it against Penn State — especially when the weather started to get dicey. But it was still unexpected to see him dial up 61 rushes against 22 passing attempts, and it was even more surprising since the Nittany Lions have struggled to stop teams through the air this season. Was Day just trying to see out a game the Buckeyes led by 21 points and potentially save some tricks for Michigan? That would seem to be the most likely explanation, because Fields still looked sharp throwing the football in the second half when he delivered a pair of touchdown strikes to K.J. Hill and Chris Olave. It was uncharacteristic of this Ohio State team for it to get so unbalanced, though, and it bears watching to see how Day adjusts his play-calling against the rivals he famously carved up last year. 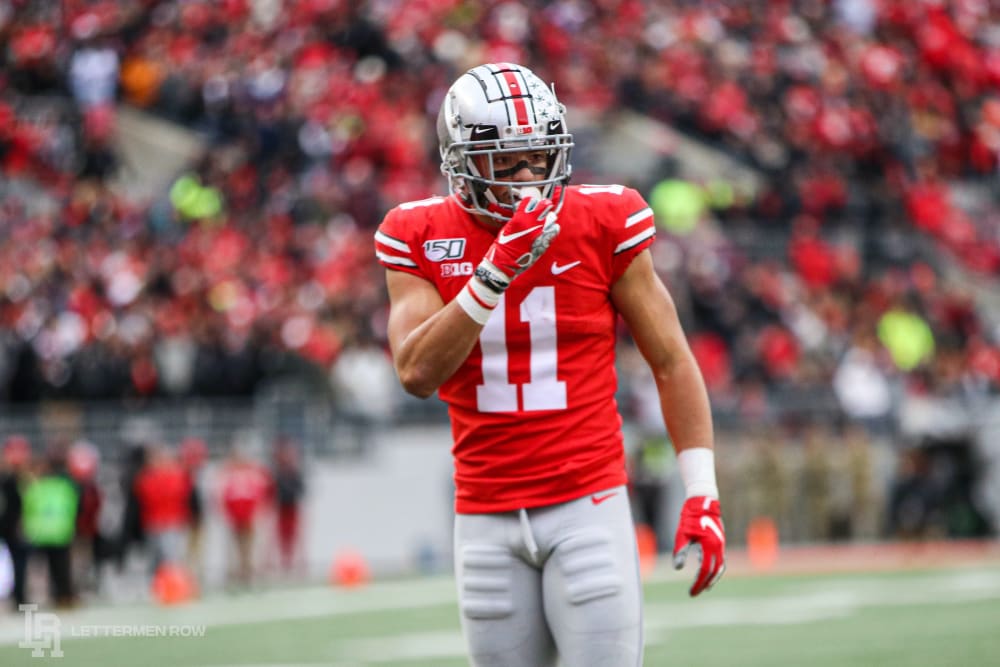 Do Buckeyes need to adjust against mobile quarterbacks?

After getting a chance to pin its ears back and rush the quarterback late, Ohio State was able to chip away at the yardage Penn State backup quarterback Will Levis had racked up and make it look more acceptable against the program standards. But there can be no mistaking that the 61 positive yards and a touchdown Levis produced after coming off the bench will give the Buckeyes something to work on this week as it gets ready for Shea Patterson in the Big House. Patterson isn’t the most dazzling dual-threat around at the position, but he can certainly pose a threat with his legs. The Buckeyes have had a couple breakdowns over the last couple games when it comes to chasing down passers, and that might be a bit nit-picky for the nation’s best defense, but that will surely be a major point of emphasis this week.

So much for the NCAA suspension being the end of the Heisman Trophy campaign for Chase Young. The Ohio State defensive end did miss out on two games where he could have padded his stats for a quarter or two, but what would that have really meant compared to his utter, absolute dominance in the most important matchups of the season? What Young has done against quality opponents like Wisconsin and Penn State boggles the mind, and his seven sacks in those two games are just scratching the surface of his impact. Beyond the tackles for loss and forced fumbles, Young is helping force false-start penalties, rattling the snaps from center and clearly speeding up the clock of opposing quarterback to produce errant throws. There is nobody playing at a higher level in college football than Young. Continuing his sack streak against Michigan should make him a no-brainer as a Heisman finalist.