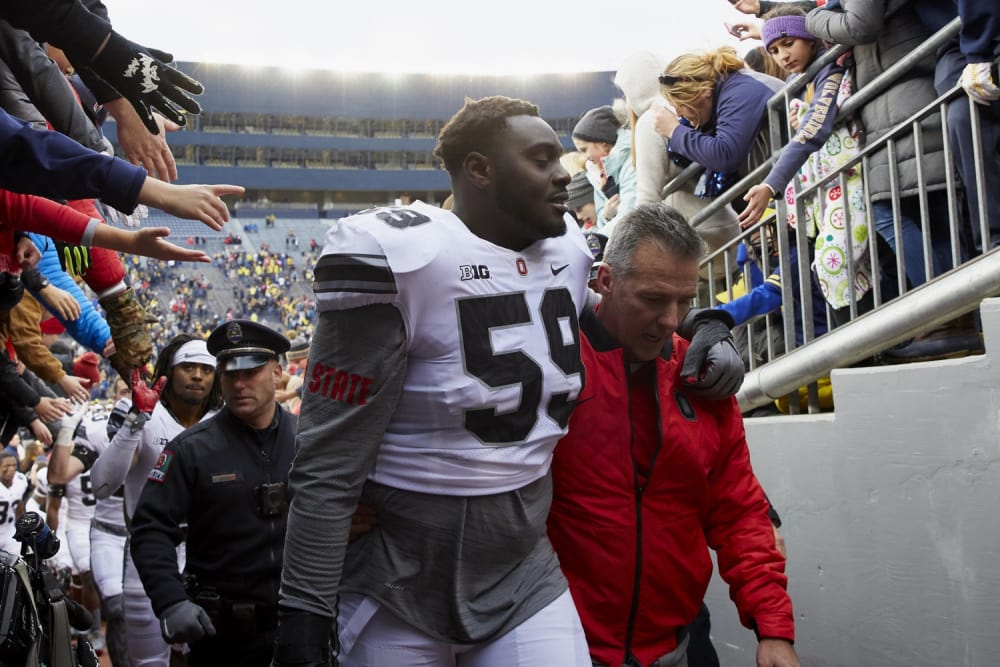 COLUMBUS — The best week of the year for Ohio State has finally arrived.

It’s time for The Game and everything else that comes with it.

The Buckeyes have certainly taken an interesting path to the final week of the season and the matchup with Michigan. But through all of the ups and downs, Urban Meyer’s program is in exactly the kind of position it would have hoped to be in right now. Ohio State can win the East Division, claim some Gold Pants, go to Indianapolis to defend the Big Ten title — and then see what happens when the College Football Playoff selection committee makes its picks.

It really doesn’t get any better than this. And Lettermen Row is starting this week with Five Questions for the Buckeyes that will help determine whether or not the winning streak and Meyer’s perfect record against the Wolverines will survive on Saturday at the Horseshoe.

What the hell happened to the Silver Bullets?

The Buckeyes may have thought they had fixed the defensive issues that had plagued them virtually all season, but clearly that wasn’t the case. The performance on that side of the ball on Saturday at Maryland was nothing short of a complete debacle. There were gaping holes against the rush, poor tackles and more big plays allowed through the air, all of which added up to one of the most embarrassing performances the program has seen for what is shaping up to be one of the worst statistical units in school history. With so much talent to work with, it’s not too late for Ohio State to put together a complete performance and slow down a Michigan offense that has dealt with its share of inconsistency. But the Buckeyes have to be honest with themselves about what happened against Maryland, and that starts with defensive coordinator Greg Schiano. 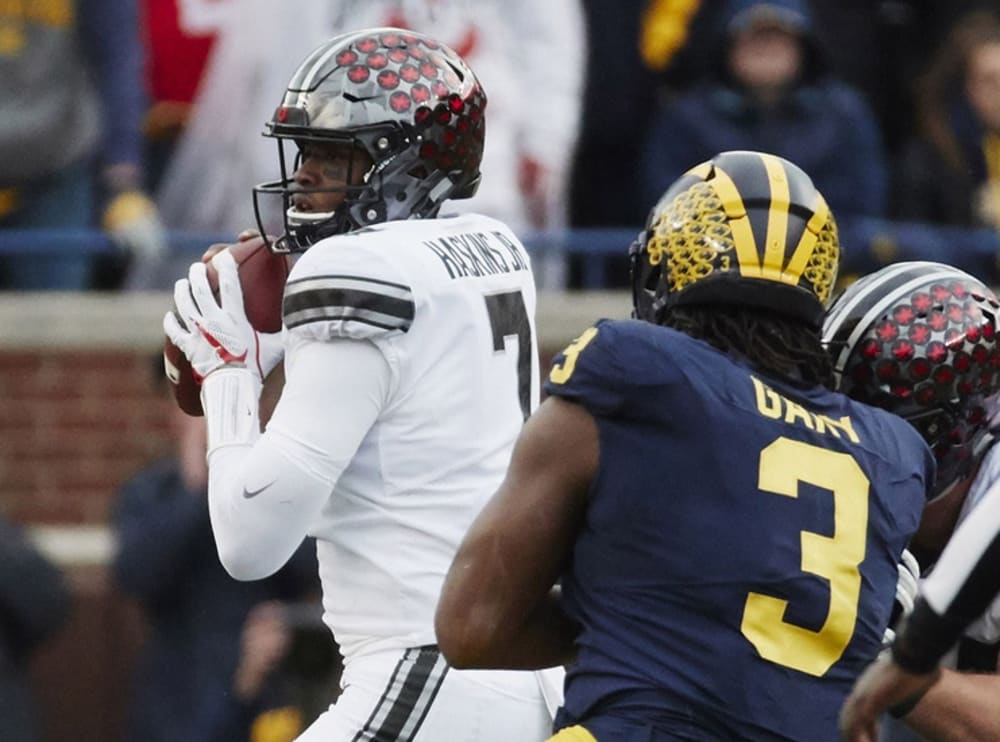 What will Dwayne Haskins do for an encore?

There will probably only be two chapters that include Dwayne Haskins in the storied history of The Game, and the first one was already a page-turning affair. His emergence off the bench, in the cold, against one of the best defenses in the country, on the road and facing a deficit was a fairytale debut for the Ohio State quarterback. Now he’s going out in the Horseshoe as the starter and all the pressure heaped on him to deliver throughout the buildup to Saturday at noon. Haskins appears to have saved up all of his best, toughest stuff for the end of the season. And the Buckeyes will need another dynamic outing from him to keep the winning streak alive.

The Buckeyes were unexpectedly without Mike Weber at tailback against Maryland due to a bruised quad that wasn’t previously announced by the program. And while they made due just fine with J.K. Dobbins delivering the finest performance of his career, Weber was also coming off one of his most impressive games in the win at Michigan State and appeared to be a key cog in the championship push. Against a skilled, physical outfit like Michigan, Ohio State needs all hands on deck — especially in the backfield. But with Weber likely playing for the last time in the Horseshoe against the team from his home state, it’s hard to imagine a bruise keeping him off the field.

Can Ohio State hold up on the offensive line?

Clearly the Buckeyes weren’t short on options to pick apart the Maryland defense, so some of their deficiencies on the offensive line were masked by the incredible efforts of Haskins, Dobbins and the veteran wide receivers. But Ohio State can’t afford to be dealing with missed blocks, blown protections or dumb penalties that have continued to plague it in the trenches. The old adage about The Game being won up front has become a cliché — because it’s almost always true. The Buckeyes can’t rule out any possible solution to the issues this week against an opponent like Michigan that can absolutely make their lives miserable defensively. 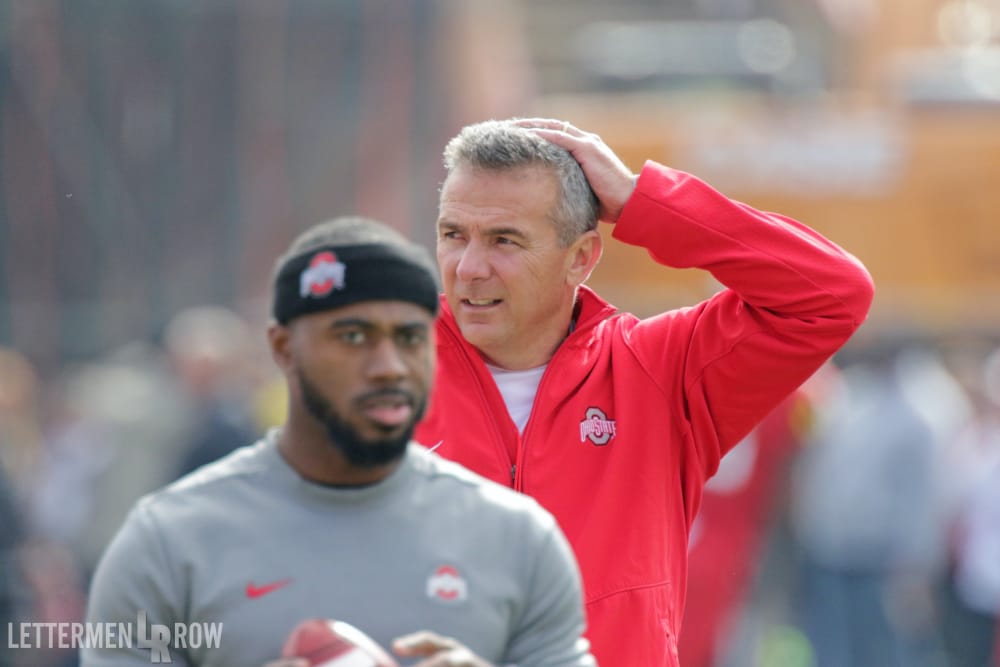 Does Urban Meyer have tricks up his sleeve?

For all the concern about Urban Meyer on the sideline thanks to the repeated focus of the cameras on him at Maryland, the seventh-year coach actually appeared to be in perhaps his best spirits of the season both leading up to the game and in his postgame press conference afterward. So, there’s no reason to believe that Meyer again won’t be pouring every last ounce of his energy and famous focus into finding an edge over Michigan and a way to get his seventh win in the series. Does that mean more gimmicks offensively like trotting out new looks with Tate Martell? Something fancy on special teams? Meyer always keeps everything close to the vest during this week, but it’s a safe bet that the Buckeyes will empty the playbook in The Game.