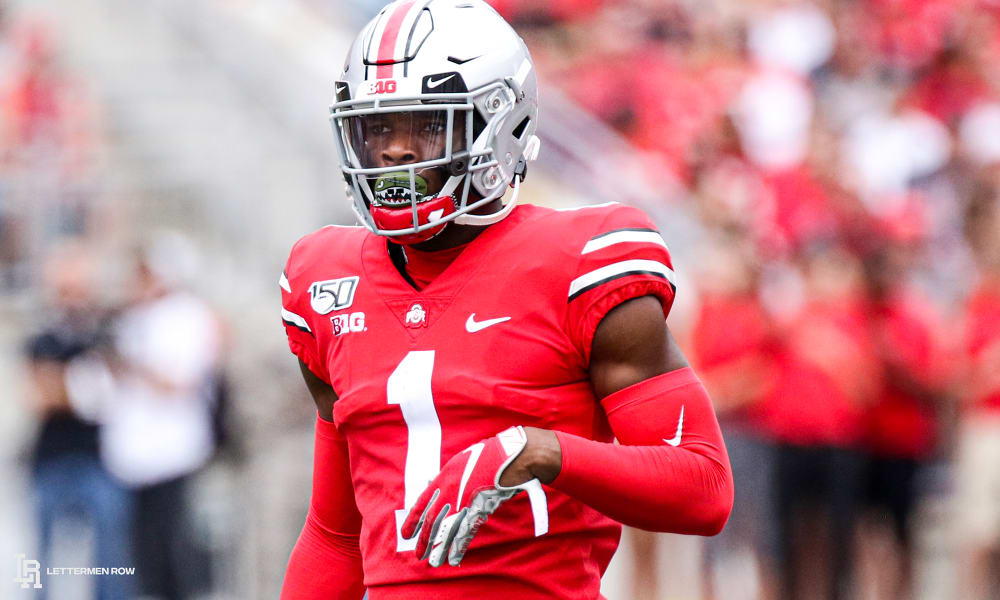 Ohio State and cornerback Jeff Okudah are looking for a fourth win in a row to start the season. (Birm/Lettermen Row)

COLUMBUS — Ohio State won’t call it a tuneup, and it’s doing everything it can this season not to take any games for granted.

But the Buckeyes are at least subtly acknowledging that this week is much more about focusing on itself rather than the opponent, which is as close as they’ll get to agreeing with the public assessment that Saturday’s matchup against Miami (Ohio) shouldn’t have any drama.

Ohio State is one one the most talented teams in the country. It’s on an early-season roll. It’s looking to establish itself as a national-title contender. So, the truth is anything less than another blowout would be a major surprise this weekend in the Horseshoe.

“It’s the same [message] as when we started a couple weeks ago, and it was all about don’t worry about what people are saying,” Buckeyes coach Ryan Day said. “I don’t know how much respect we had throughout the country coming into the season, but we said, ignore the noise. Well, it’s the same thing now. Just because we’ve won a couple games, it hasn’t changed anything for us, so we need to stay focused on right now.

“We do have some momentum going right now, but we’ve got to keep that going, and that’s incumbent upon the coaches and the leaders to make sure that we stay focused and that we don’t get distracted.”

It would take an enormous pile of disruptions to keep Ohio State from winning its final non-conference game of the regular season. And with that in mind, Lettermen Row is going beyond the scoreboard and again making Five Bold Predictions for what is going to happen on Saturday afternoon for the Buckeyes.

The Buckeyes are going to be able to score however they want and as much as they want. And after a couple games without a catch while doing the dirty work as blockers, expect Ohio State to reward the tight ends with a little glory in the end zone. Jeremy Ruckert scored twice in the opener, and he’s a safe bet to grab a touchdown against Miami. Both Luke Farrell and Rashod Berry figure to get targets in the red zone as well, and at least one of those guys is going to hit pay-dirt in the rout of the RedHawks. The usage rate might stay inconsistent over the course of the season for the tight ends, but this is the kind of game where they should have a chance to pad the stats.

After two Ohio State tailbacks accomplished this feat last week at Indiana, the Buckeyes are feeling really good about their ground attack this Saturday against Miami. Maybe J.K. Dobbins and Master Teague III each rack up 100 again, but true freshman Marcus Crowley is going to get the bulk of second-half carries and he’ll run as hard as he can to leave an impression on the Ohio State coaching staff before the real bulk of Big Ten play arrives in two weeks. The Buckeyes are going to be up big and will do whatever they can to avoid risking anything weird happening before Nebraska, and that means a steady dose of the ambitious freshman from Jacksonville, Fla. 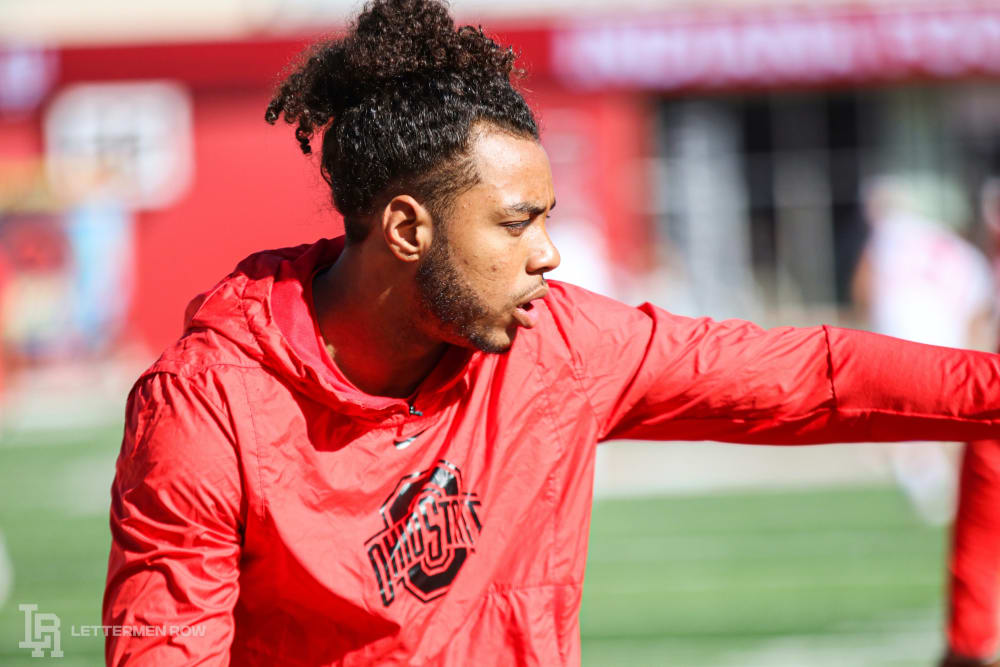 Ohio State running back Marcus Crowley should see some action for the Buckeyes on Saturday. (Birm/Lettermen Row)

Tim May: Jeff Okudah nabs an interception for Ohio State

Never give up on a man who shows major potential is a philosophy of most successful coaches. Ohio State did not, in the case of Damon Arnette, is reaping the reward so far this season. And while his payoff came last week in the win at Indiana with his 96-yard interception return for touchdown, his fellow starting cornerback Jeffrey Okudah might benefit from a residual effect, perhaps as early as Saturday when OSU plays host to its last non-conference foe of the regular season, Miami of Ohio. With Arnette now a respected force on the other side of the field, perhaps the Redhawks and their freshman quarterback Brett Gabbert will be more willing to test Okudah, who, coming off a strong finish to the 2018 season, saw his area become a seldom-fly zone the first three games this year. The crystal ball says he’s due to make some kind of major play. And get this: If it’s an interception, it would be the first as a collegian for the former five-star prospect from South Grand Prairie, Texas.

It might not come from another Chris Olave blocked punt, but the Buckeyes have been steady on special teams all season. Demario McCall should have had a kick return for touchdown in the opener against Florida Atlantic. Ohio State seems to have something figured out with blocking field goals. Chase Young should’ve had one again last week. This game is the perfect opportunity for Matt Barnes and the special teams to find some points to build off the safety last week. 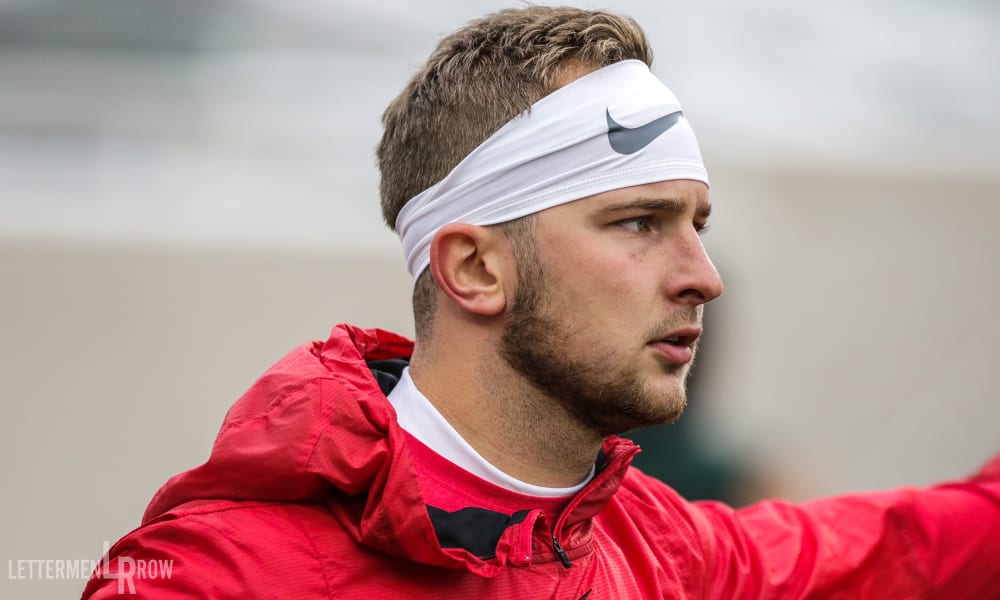 Ohio State backup quarterback Chris Chugunov has a chance to make an impact for the Buckeyes this week. (Birm/Lettermen Row)

Will Crall: Gunnar Hoak or Chris Chugunov will throw for a score

It his very likely that Ohio State will need someone other than Justin Fields to take a meaningful snap at quarterback this season, even if it is just for a few plays or a series. Ryan Day said at his weekly press conference that Gunnar Hoak and Chris Chugunov are still splitting reps with the second-team offense, even though Chugunov has been the second quarterback to play in the first three games. The very little we have seem from these two backups has not been stellar. When evaluating the Buckeyes performance against Indiana, Urban Meyer said on the FOX postgame show that “the only concern is the backup quarterback.” I think that both quarterbacks will see extended action against Miami and one of them will throw a touchdown pass and lock up the No. 2 role.

Viewing Guide: What, How to Watch Buckeyes against Miami (Ohio)
Buckeyes depth hit again, four defensive linemen out this week