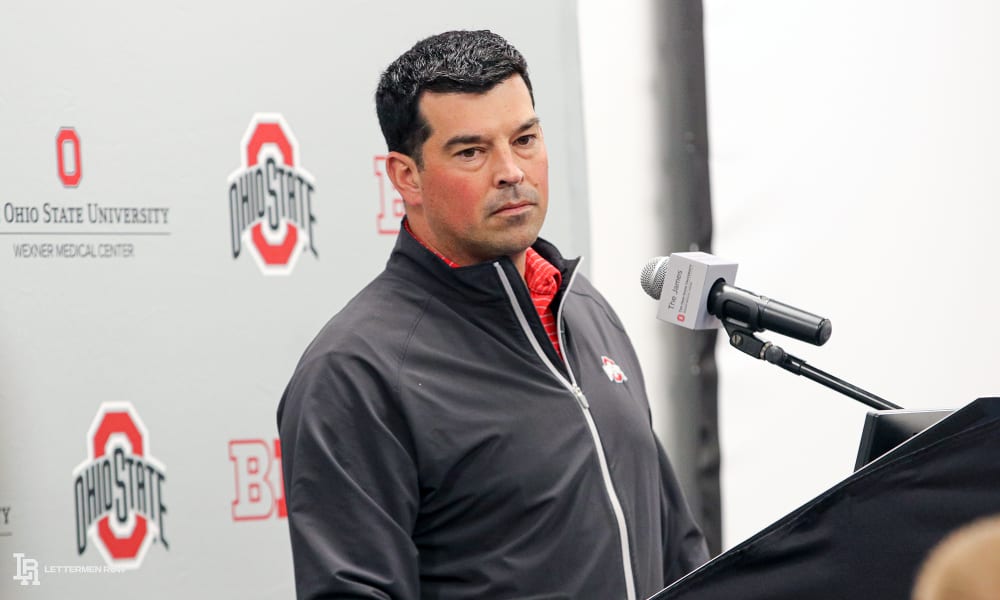 COLUMBUS — There’s really no point in Ohio State pretending like it’s anything other than a massive favorite heading into its final non-conference matchup.

So, while the Buckeyes did pay the proper amount of respect to Miami (Ohio) as they kicked off preparations for the week ahead, it was quite clear that the main focus is simply on themselves and not the opponent.

That mentality can be useful for any game, of course, since it removes the need for the competition level to be high to get the attention of the program. And Ohio State is fully embracing that approach right now by rattling off dozens of ways the No. 6 team in the country can still improve before diving back into Big Ten play.

“Yeah, we have played well, but we didn’t play great,” Ohio State coach Ryan Day said on Tuesday at the Woody Hayes Athletic Center. “We played hard, they played tough, but we have so many things to clean up. And when you watch the film, it’s actually really frustrating to watch. There’s so many things we could be cleaning up there. The coaches are working at it. We started that on Sunday and making sure we started addressing some of those issues.

“But it was the same thing when we started a couple weeks ago. It was all about: Don’t worry about what people are saying. I don’t know how much respect we had throughout the country coming into the season, but we said to ignore the noise. Well, it’s the same thing now. Just because we’ve won a couple games, it hasn’t changed anything for us. We need to stay focused on right now. We do have some momentum going right now, but we’ve got to keep that going, and that’s incumbent upon the coaches and the leaders to make sure that we stay focused and that we don’t get distracted.”

The Buckeyes haven’t let much slow them down through three games, easily taking care of business with comfortable wins in all of them to start the season. They’re obviously expected to do that again on Saturday against Miami, and here’s what Lettermen Row learned about the emphasis for the Buckeyes as they gear up for the next opportunity to improve in the Horseshoe.

J.K. Dobbins again made it clear that Ohio State doesn’t need to find another tailback to split the workload with right down the middle in the backfield. The junior is thriving now that he’s officially the lead option for the Buckeyes and is coming off a performance that earned him Co-Offensive Player of the Week honors in the Big Ten.

But Ohio State had been looking to establish a pecking order behind him, and Master Teague is leaving absolutely no doubt that role should belong to him coming off 106-yard outing at Indiana.

“I wouldn’t say it’s relief as much as it was just excitement to see him get going,” Day said. “Because I think we all kind of had an idea what we had, but it was hard because of these nagging things that were going on. We couldn’t get him practicing and get him going. … We said he had, I guess, three, four weeks of practice in, and he was just about ready to get going, and he did. And so that was exciting to see for sure.

“Now he needs to assert himself and start to be a guy we can count on.” 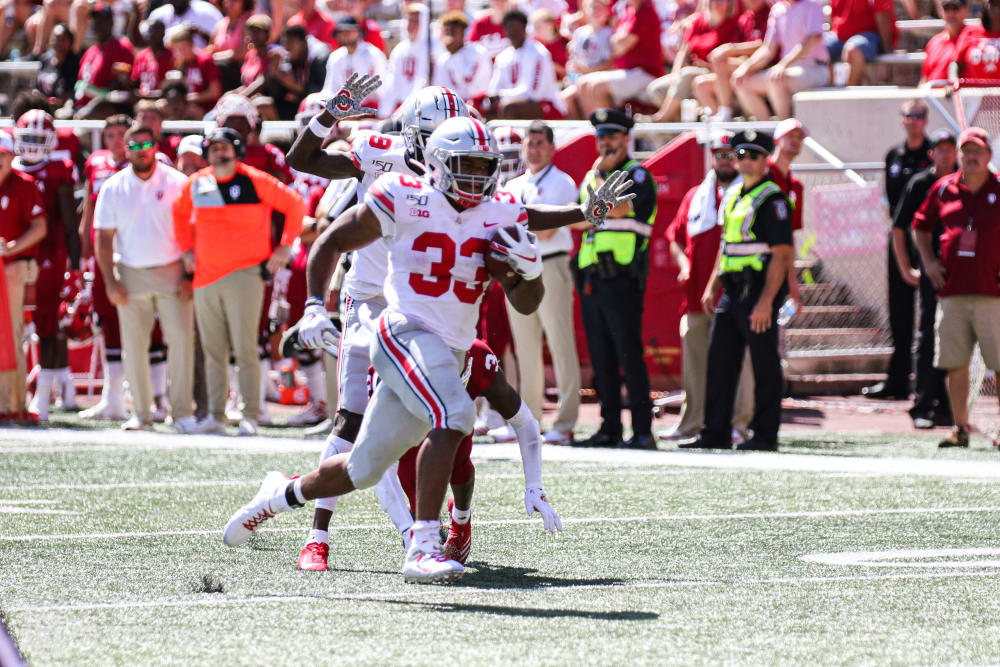 Ohio State running back Master Teague is solidifying a role as the No. 2 option for the Buckeyes. (Birm/Lettermen Row)

Even before he popped the film in on Sunday, Justin Fields had already self-diagnosed some problems walking off the field Indiana. The sophomore quarterback has already proven to be highly critical of his own game dating back to his first spring camp with the program, so it obviously was no surprise to hear him pick apart the throws he missed in the blowout victory instead of patting himself on the back for accounting for four more touchdowns.

Fields saw plenty he would like to improve when he watched the game over again. But the first order of business will continue to be setting his feet as he learns to handle more pressure in the pocket as a passer.

“It’s kind of like a ‘Wow’ moment, like we still played pretty well but we did leave stuff on the board,” Fields said. “We have so much room to improve, that makes it exciting.

“There are too many things I missed on Saturday, too many throws I missed. That’s just on me, and I’ve been working on that a lot since Sunday. … Just seeing all the improvements I can make, I think that will definitely help my game.”

Damon Arnette didn’t use his chance at the podium to rub his success in the nose of anybody who has criticized him. Instead, the senior cornerback just vowed to deliver more performances for the Buckeyes like the impressive effort he delivered at Indiana.

Arnette did acknowledge that the way he’s come out of the gates for Ohio State has validated his decision to return for another season. And there might be even more highlights like his 96-yard interception return in the works once he gets that cast off his right wrist.

“After the game, I was just like: All right, this is the start now,” Arnette said. “Everything that is happening now, I saw that happening when I decided to come back to school. Y’all are just seeing it right now. And your eyes are going to keep on getting bigger, because we’ve got some more stuff to do, for real.”

Ohio State primarily wants to get the starter ready, so there aren’t a tremendous amount of reps to go around when it comes to an ongoing battle for the backup quarterback job. The coaching staff suggested that might change during one of the two off dates the Buckeyes have this season, and that could be a time to re-evaluate where they stand as Chris Chugunov and Gunnar Hoak dual to be the first guy off the bench if something happens to Fields.

But for now, Chugunov has had the edge and appeared first in all three games when Fields heads to the bench. And while that can change as Hoak gets more comfortable in the system, a shakeup wouldn’t seem likely until the middle of October at the earliest.

“Well, I think [Chugunov’s] approach and being a little more familiar with the system,” Ohio State quarterbacks coach Mike Yurcich said about the difference now. “I think we’re still working through the evaluation process and evaluating those guys on a day-to-day basis.

“So, each practice brings us an opportunity to take a closer look, give those guys more reps and see who it will be as we continue to move throughout the season.”

The streak is growing. Now the pressure will be on all five offensive linemen for Ohio State to keep it going after all of them graded out as champions for the third consecutive game.

It would have been understandable for the unit to deal with some growing pains with four new full-time starters in the lineup. But that hasn’t been the case at all for the Buckeyes so far based on the evaluations from the coaching staff, which isn’t known to ever fudge the grades just to make a few players feel good.

“We definitely celebrate the wins and stuff,” right guard Wyatt Davis said. “And with all of us grading out as champions, it’s been a cool thing for these past couple games. … We’re all executing on a high level, and if we continue on this path, we could be something really special.”