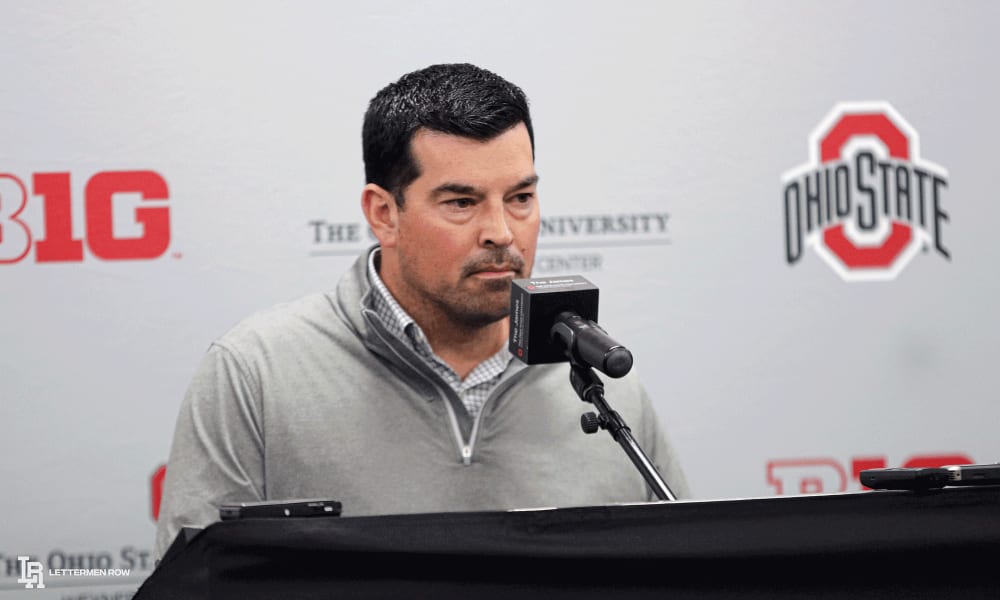 Ohio State coach Ryan Day is preparing the Buckeyes for the final month of the regular season. (Birm/Lettermen Row)

COLUMBUS — Motivation hasn’t been a problem for Ohio State at all this season, and that’s not going to change now that it’s time to compete for championships in November.

But just in case, all Ryan Day has to do is mention the memories of a wild trip to Maryland last season and the Buckeyes will snap right to attention.

Even in what turned out to be an overtime win a year ago and even in a season that featured a bewildering upset loss at Purdue, that near-upset against the Terrapins was one of the most glaring performances of the season for the worst defense in school history. And while the Buckeyes have an unbeaten record to protect, a Big Ten title to defend and a College Football Playoff bid to pursue, odds are there will be a number of guys in the Horseshoe on Saturday intent on proving that escape was a fluke.

“It was only a year ago they played against them and they ran for 300 yards,” Ohio State coach Ryan Day said. “They know that. I don’t think they’re proud of that. They want to do a better job this time around, for sure. … I think they know how dangerous the running game is.

“You learn a lot about your team in a game like that. You have to gut it out. I think as tough as that game was, it catapulted us through the rest of the season.”

The Buckeyes, of course, still haven’t lost since narrowly avoiding that disaster at Maryland. And as they look to extend their winning streak, this time they’ll get the Terrapins at the Horseshoe and will head into that game as a huge betting favorite. So, how is Ohio State approaching the matchup as the stakes continue to get higher? Here’s what Lettermen Row learned during the weekly press conference at the Woody Hayes Athletic Center.

Turnaround of Ohio State defense has been comprehensive

As a struggling Maryland squad kept breaking off explosive runs and piling up touchdowns, Ohio State was reaching the defensive low a year ago. And that has made the rise from the worst unit in school history into arguably the stoutest unit in the nation this year downright remarkable.

The fact that Ohio State has so much on-the-field personnel carried over from a year ago only adds to the intrigue. Comparing last year to this season’s success, Day couldn’t pinpoint just one factor in the improvement — because it’s been a top-to-bottom overhaul that is getting the results.

“I think there’s a lot of things,” Ohio State coach Ryan Day said. “In terms of maturity, these guys are all a year older. That’s all changed. The scheme has changed. There’s a lot that goes into it. The offenses we’re seeing are different. This team is hungry. I think they all really enjoy playing with each other. I think it’s a conversation that would take more than just one answer on why.

“So far to this point, they have played at this level. They have got to bring it every week now. It’s going to be the same thing: It’s only as good as you played the last week.”

The command of the attack is becoming more obvious every week. Justin Fields is clearly becoming more confident as a leader for the Buckeyes. And it’s hard to argue that he isn’t comfortable in the system since he’s accounted for 33 touchdowns in his first eight games as the starting quarterback.

But Ohio State quarterbacks coach Mike Yurcich isn’t as interested in how much Fields has developed in such a short time with the program. The reality for the Buckeyes: They still see a lot of room to grow.

“The pressure is in the preparation,” Yurcich said. “If you continue to put pressure on him in practice with tough situations and making it hard in practice and you’re going against a really good defense in practice, then you can just react in a game. You play faster, you’re in the moment, you’ve drilled it so you can anticipate and play with great speed.

“There’s a significant amount [of growth left]. What is that? I just think we both can get better.”

If Chase Young is going to make individual history, he’s going to need help from his friends up front.

And while the thriving defensive tackles like Jashon Cornell or Davon Hamilton aren’t likely to get much recognition for the work they’re doing alongside the superstar end, Young has made it a point to give them credit anytime he has personal success. Of course, it also doesn’t hurt that Cornell and Hamilton have proven to be decent playmakers in their own right with a combined 9 tackles for loss heading into the final month of the regular season.

“One thing Chase does is praise everybody on the defensive line,” Cornell said. “He tells us that he wouldn’t be able to do what he’s doing if we weren’t helping him out on the inside. That’s one thing we love as inside guys, hearing that praise about the dirty work that we do. That’s one thing Chase does lot is really point to what we’re doing and all the work on the inside.

“I used to be a defensive end, and a lot of guys don’t understand that it’s a hard job to take on double teams and take on 320-pound guards and then have a tackle come down on you. I think he has a good understanding of what [the defensive tackles] do on the inside.”

There was no denying the soreness in his back last week, but Justin Fields was also never planning to let it slow him down either on the practice field during the off date or heading into the matchup with Maryland.

So, it was no surprise to hear the Ohio State quarterback pronounce himself fit and ready for his ninth start with the Buckeyes on Saturday. The second weekend without a game probably did come at a good time for Fields after he took a pounding in the win over Wisconsin, though he would have been able to play last week anyway.

“I feel good,” Fields said. “I got a lot of treatment last week, and I just worked on my back a lot, iced it a lot. I feel good going into this week.”