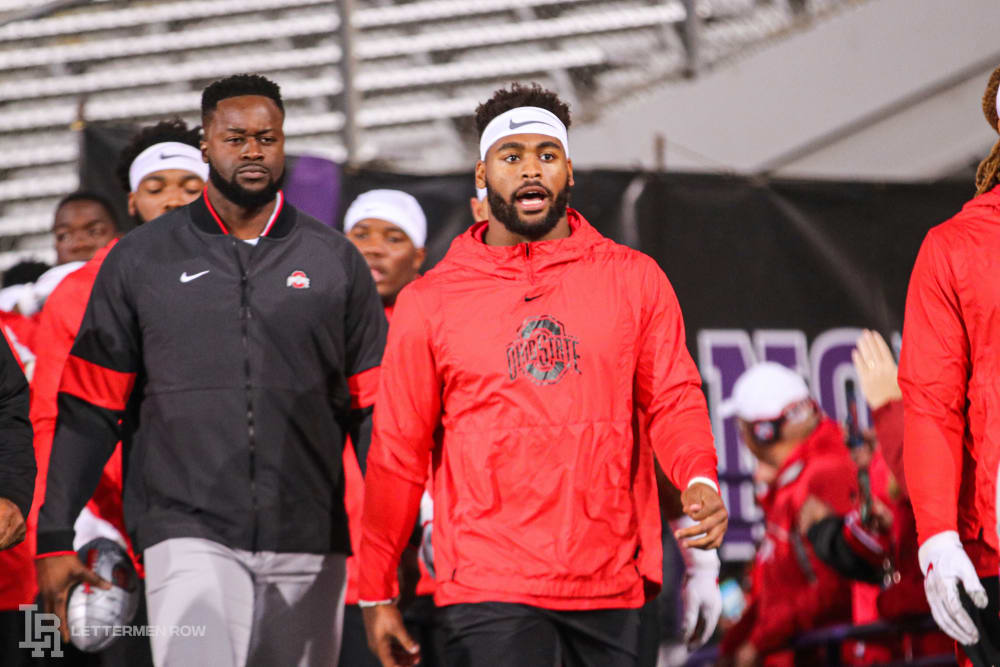 Ohio State defensive end Jonathon Cooper is working to get back in the Buckeyes lineup. (Birm/Lettermen Row)

COLUMBUS — The stretch run has arrived at Ohio State.

Sure, the Buckeyes are going to be enormous betting favorites over the next weeks, and it’s hard to look at Maryland and Rutgers as anything other than tuneups for arguably the most complete team in the country right now. But the calendar has been flipped to November, which means it’s officially time to compete for championships in Columbus.

The off dates are both in the rearview mirror. The chances to relax over a weekend and get healthy without playing are gone. And only four more weeks of regular-season action in the Big Ten are left for Ohio State — which would add even more urgency for the program if it hadn’t already been treating every game like the next is the only one that matters and every practice like it’s the last.

“There’s not one, like, major flaw,” Ohio State coach Ryan Day said. “I think there’s a lot of little things that we need to work on and clean up and do a better job of, for sure. I mean, watching the film, especially on offense — that first half [against Wisconsin] there’s a lot of things to clean up. But it isn’t just one thing.

“If you’re asking me what are the one or two things we need to focus on, it’s not that. It’s just a lot of little things that we certainly need to tighten up.”

The Buckeyes have used that never-satisfied mentality to fuel their unbeaten, eight-game run through the schedule so far. And while Maryland isn’t likely to be much of a threat on Saturday at the Horseshoe, Ohio State found out last year how dangerous it can be to overlook the divisional opponent in a matchup that wound up being far more entertaining than it ever should have been.

So, how will the Buckeyes tackle the days ahead of the matchup with the Terrapins coming off the date? Lettermen Row is kicking off Maryland Week with five questions for Ohio State. 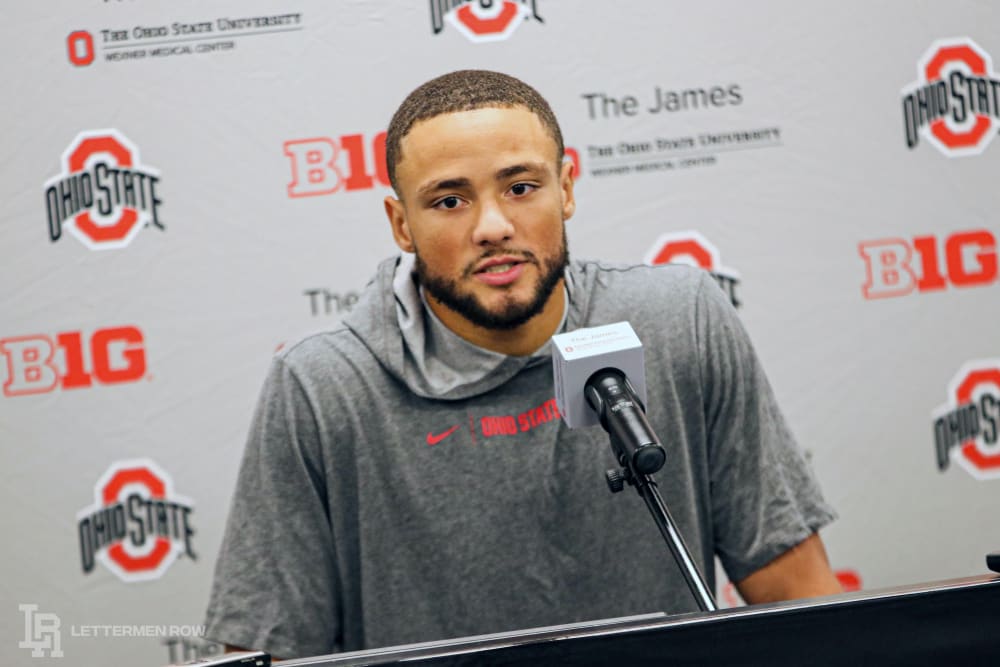 How healthy did Buckeyes get?

At this point of the season, Ohio State would almost certainly consider itself to have been lucky in the injury department. But the Buckeyes haven’t ever been fully healthy, either, which could be a scary thought coming out of the off date with a couple key contributors potentially benefitting from the breather over the weekend. All eyes will again be on senior defensive end Jonathon Cooper, who continues to deal with soreness dating back to the high-ankle sprain he suffered in training camp. Fellow senior Austin Mack is trying to get back in action after missing the win over Wisconsin with what Lettermen Row was told was a hamstring issue, and the Buckeyes could use him during the championship push at wide receiver. And even after playing against the Badgers, left tackle Thayer Munford and linebacker Baron Browning still weren’t at 100 percent, and the extra time in the training room could wind up being a big boost for those regulars.

What can Chase Young do for Ohio State encore?

The Heisman Trophy spotlight has finally arrived for Chase Young, so more scrutiny over his every move is on the way. If a defensive end is going to break the drought for non-offensive players in the race for the sport’s top individual prize, Young is going to have to continue to pile up impressive numbers — which might actually be tricky over the next two weeks with Ohio State likely getting chances to rest the starters early against both Maryland and Rutgers. The superstar junior should truly be judged by what he does in the biggest games, but he’s not going to get the same benefit of the doubt as quarterbacks and running backs. Young has never made the Heisman his primary focus and wants to win games more than anything else. But either way, he’s probably going to need to work quickly against the Terrapins.

Justin Fields still hasn’t topped the 234 passing yards he had in the season opener, and yet Ohio State remains one of the most explosive scoring attacks in the country. So, it’s not like the Buckeyes have an issue that needs to be fixed on that side of the ball, the threat of the pass is already keeping defenses honest — and the weather wasn’t exactly conducive to airing out the football against Wisconsin. But at some point, Ohio State is probably going to face an opponent capable of at least slowing down the dominant rushing game and putting more pressure on Fields to deliver with his arm. He’s certainly shown signs of being up for the challenge, but these next couple games could provide useful opportunities to let him throw more to help prepare for the tougher tests that are coming. 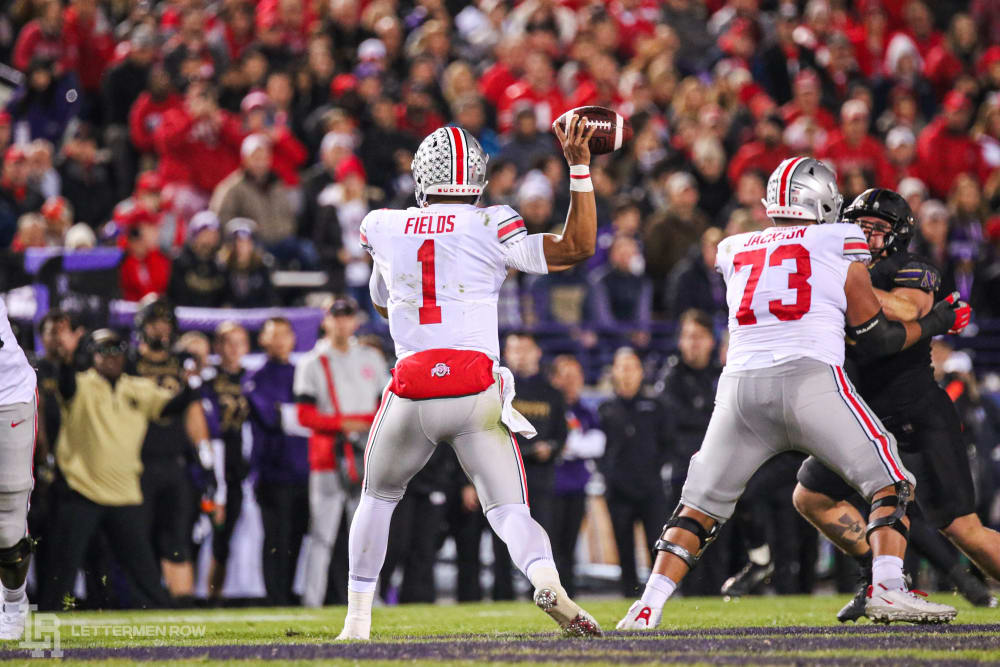 Is Garrett Wilson going to get punt-return nod for Ohio State?

The old coaching cliché about football being a result-based business and the film being the ultimate resumé don’t leave much wiggle room for Ohio State. Anybody watching this season can tell that Garrett Wilson is giving the Buckeyes more on special teams, and it will be interesting to see if they’re finally ready to officially give him the punt-return job and all the responsibility that comes with it. The coaching staff obviously has the benefit of working with a lot more information on the practice field to make a decision, but the results when it counts decisively favor Wilson over Demario McCall.

“I think when you look at what he’s done and the last few returns, he’s making a strong move to be the starter,” Day said during the off date.

Who will nab next interception in Buckeyes secondary?

Ohio State has proven to be incredibly difficult to throw on thanks to lockdown work in the secondary, and even getting passes off has been a challenge thanks to the Rushmen up front. So, again, there’s not much for the Buckeyes to really stress about there heading into November. But for a group of perfectionists looking to strengthen a claim that the unit is again the Best in America, a couple more interceptions would surely help. Damon Arnette may be playing with a cast on his hand, but he’s not making excuses and looking to end a drought that goes back to Week Three with his pick six against Indiana. Jeff Okudah hasn’t got his hands on the football since his two-pick outing at Nebraska. Expect both of those guys to be focused and fired up to get back in the box score against Maryland.