Connect with us
Ohio State won't get to play on Saturday against Maryland. (Courtesy/Ohio State Dept. of Athletics)

COLUMBUS — Honestly, it was probably inevitable that Ohio State wasn’t going to complete a full schedule.

In fact, that’s one of the biggest lingering head-scratchers about the truly disastrous Big Ten decision to try to play its delayed, revamped, eight-game slate without leaving any room for postponements, off dates or rescheduling opportunities.

Also, it’s through no fault of the Buckeyes, who remained on course yet again to play on Saturday before Maryland had eight players test positive for COVID and halted all team activities. But Ohio State still has to pay the price this weekend and miss out on one of the limited opportunities it had to keep proving itself as a College Football Playoff contender — not that beating the Terrapins really would have carried much weight in the first place.

“The health, safety and well-being of our student-athletes is our main concern,” Ohio State coach Ryan Day said in a school statement. “Obviously, we are disappointed at not being able to compete this week, but I am incredibly proud of our team and the way they have handled themselves throughout this entire pandemic.

“We wish Maryland, their student-athletes and programs well as they battle through this issue.”

The Buckeyes were four-touchdown favorites heading into that matchup in the Big Ten East Division, and not getting a chance to actually claim that victory creates some unique challenges and storylines moving forward. Lettermen Row is trying to dive into the implications now as Ohio State deals with an unexpected off date. 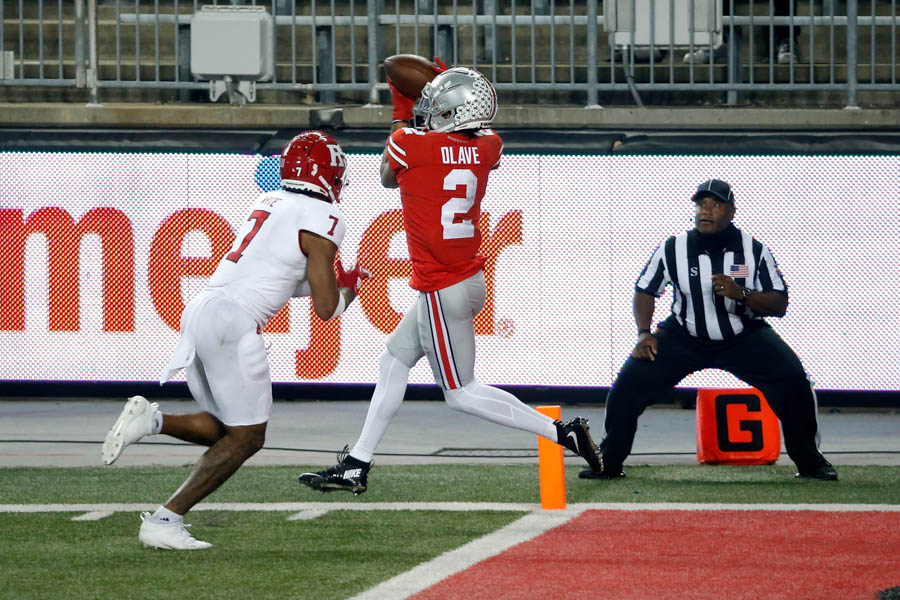 First and foremost, Ohio State can’t fill the void by looking for another healthy opponent — even if there is another College Football Playoff contender free this weekend that was also ready to play and would provide huge television ratings.

So, no, there won’t be a surprise matchup between Alabama and the Buckeyes this weekend. The Big Ten has already made it clear that it won’t sign off on nonconference games even if both programs agree to it, a precedent it established when it put the kibosh on Nebraska’s efforts to replace a cancellation with Wisconsin last month. On top of that, it’s incredibly unlikely even if the Buckeyes and Crimson Tide could have played this week that either Ryan Day or Nick Saban would want to play the most talented opponent either would face during the regular season with only one day to practice and prepare.

It’s fun to dream about it happening. But it will have to wait until possibly the College Football Playoff. Speaking of the postseason …

College Football Playoff needs to be pushed back

Every conference in America now needs a little flexibility. The College Football Playoff is more than capable of providing that breathing room, and it’s time for it to do so.

There was never any incentive for the SEC, ACC or Big 12 to budge from the scheduled dates when everything was proceeding according to their plans, and it was understandable why those leagues weren’t in any hurry to lend a hand to the Big Ten after it went rogue over the summer. But everybody is running out of dates to reschedule key games that will determine championships and ensure there is still meaning for the four-team field at the end of the season. Pushing back the semifinals and title game a couple weeks would be incredibly helpful in that department.

The Rose and Sugar bowls are married to their tradition, and they never want to give up the New Year’s Day spots. But this is the most unusual year in the history of the modern game, and that should be enough to convince the organizers to get creative with a different plan. 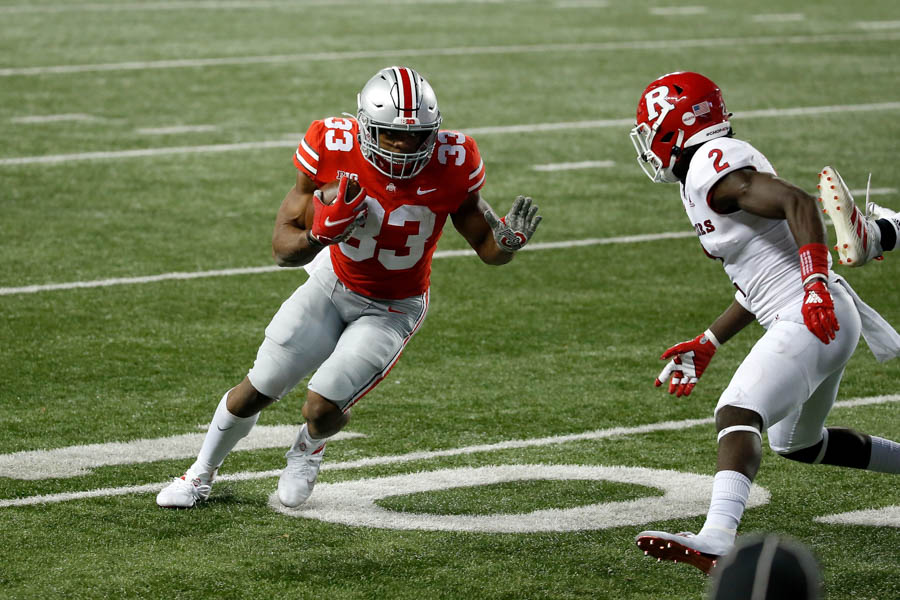 Ohio State running back Master Teague will have to wait until next week to play again. (Courtesy/Ohio State Dept. of Athletics)

Suddenly there were a lot of closer looks and double-takes at the established guidelines the Big Ten set out for determining the participants in the conference title game, because the Buckeyes are about to fall behind without ever losing a game. Assuming Indiana wins this weekend against Michigan State, it will arrive in the Horseshoe as the division leader — which immediately prompted some concern around Columbus about what would happen if next week’s matchup couldn’t be played.

Admittedly it’s a long-shot scenario, but if both Indiana and Ohio State finished unbeaten without playing each other, it appears the East Division would be decided by the records of the West Division opponents those programs played. In all likelihood, that edge would go to Indiana as it plays Wisconsin and Purdue — instead of Nebraska and Illinois for the Buckeyes.

Again, that’s a very specific, far-fetched outcome. Of more pressing concern at the moment for the Buckeyes is the risk of other opponents forcing them to drop below the current six-game threshold required to win the Big Ten. Ohio State has done nothing wrong, and suddenly it’s one cancellation away from being at the projected minimum number of games needed to defend its conference crown.

There’s no way around it: The Big Ten completely embarrassed itself with its handling of this season.

Nothing was ever going to be perfect; nobody expected that it would be. But the initial decision to completely cancel the season never made sense in the moment, and every other botched move since then has been the product of that short-sighted, impatient choice not to simply delay and take advantage of the flexible schedule it had just put out in August.

There was no shot the Big Ten was ever going to be able to play nine games in nine weeks without interruption. The league already had enough information from other conferences that started playing in September to know that, and it further shot itself in the foot by not opening the season on Oct. 17 and at least giving itself one date to potentially reschedule games. Of course, it could have avoided the whole mess by starting when it originally planned to do so in September when it built in multiple off dates in its ballyhooed, Jenga-inspired schedule. Playing a full slate was always going to be a tremendous challenge, but not giving itself the maximum amount of time to do it was utterly nonsensical.

Even Justin Fields knows his Ohio State numbers so far are ‘crazy’
Scarlet Sunrise: Buckeyes at Maryland canceled due to COVID concerns
Advertisement