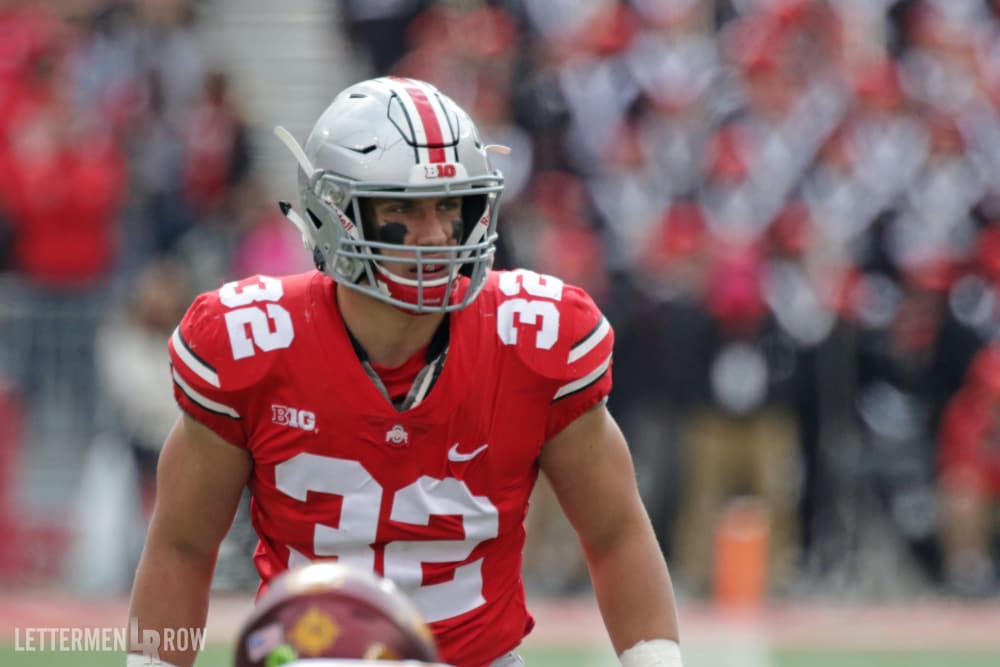 Ohio State linebacker Tuf Borland is making sure the Buckeyes are focused on Maryland. (Birm/Lettermen Row)

COLUMBUS — The potential distractions are piling up, and Ohio State is obviously aware of all the potential traps.

The Game is looming. A new batch of College Football Playoff rankings were released on Tuesday night. Another controversial drew Urban Meyer and the program back into a national conversation to emphatically deny allegations of racially-charged language.

And somewhere in there, the Buckeyes still have to prepare for a tricky road test in a Big Ten East Division matchup at Maryland, which is one reason “Laser Focus” was flashing on the video screen hanging in the Woody Hayes Athletic Center while they practiced on Tuesday night.

That approach has produced some encouraging results for the Buckeyes as they’ve opened up November with a couple important victories, including a dominant road win over a hard-nosed Michigan State squad in adverse conditions on Saturday.

The defense has buttoned up a few issues and cut down on the explosive plays allowed. Ohio State’s rushing offense and red-zone attack have come back to life. And the Buckeyes also appear to have ramped up the aggression in all three phases while following the example of a group of captains setting the tone for a championship contender with no margin for error.

“I don’t think [there’s any lack of focus],” offensive coordinator Ryan Day said. “To fall into something like that at a place like Ohio State, I think that would be crazy.

“You can’t afford to take a breath anywhere on the schedule, so I don’t feel any of that.”

The pressure always mounts at this time of the season, of course.

But so far, the distractions can’t claim any victories over the Buckeyes.