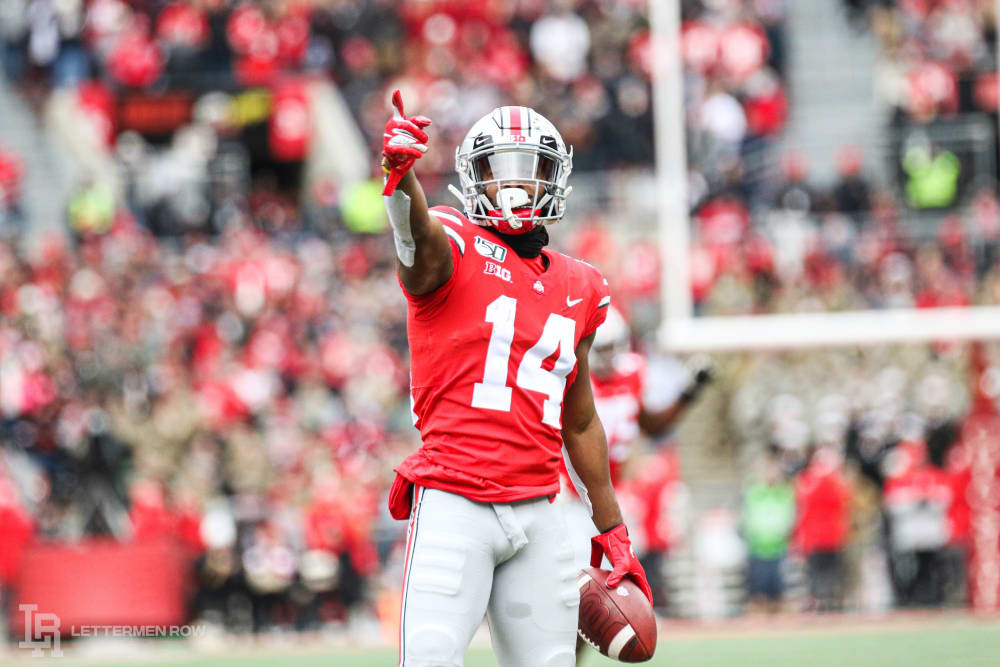 Ohio State wide receiver K.J. Hill and the Buckeyes kept on rolling in a blowout over Maryland. (Birm/Lettermen Row)

COLUMBUS — There really shouldn’t have been much that qualified as a surprise for Ohio State.

The top-ranked team in the nation was a massive favorite for a reason. The Buckeyes have proven every single week that they are locked in regardless of the opponent. And on Saturday in particular, they were supremely motivated to erase a bad memory against Maryland from last year and make up for the absence of captain Chase Young during his indefinite NCAA suspension.

But somehow the easy dominance of the 73-14 win over the Terrapins still was eye-opening, a clear-cut reminder of just how high the ceiling is for the Buckeyes even when they’re shorthanded.

“I think when this team faces a little bit of adversity, we have an edge and want to come after you and be aggressive,” Ohio State coach Ryan Day said. “I think that’s the approach.

“I think there’s great leadership. I think the coaching staff is doing a good job week in, week out of preparing these guys. And we’re playing with an edge. We have to continue to bring it each week, and we have to challenge the guys to do that. We know what happens if you don’t. If you don’t bring it every week, you can really get yourself jammed up. So we have to make sure that we’re bringing it each week.”

The Buckeyes certainly didn’t hold much back with the guys on the field on Saturday, and the way the game developed wound up revealing plenty about the two-time defending Big Ten champs as they dive into the month that will define the season. Coming out of the latest blowout victory, here’s what Lettermen Row learned about Ohio State in the Horseshoe.

Next wave of Rushmen rising for Ohio State

The preference is to have Chase Young available for the biggest games of the season, that’s obvious. And while it’s rather pointless to speculate about the length of his suspension, multiple sources around the program and involved with the appeal have been indicating the likely outcome will be two games — although the NCAA is notoriously difficult to predict. Either way, the Ohio State defensive line showed it has enough depth, versatility and high-end talent to manage just fine until the superstar returns. Tyreke Smith is finally healthy and looking like the guy expected to become the next leader of the unit, making two sacks in the blowout. True freshman Zach Harrison is living up to his five-star billing as his opportunities to help increase, and he chipped in a sack as well. And right in the middle, Davon Hamilton was fueling it all with another absurdly impressing outing at defensive tackle, consistently moving the line of scrimmage and adding a little pass-rush success as well with a pair of sacks. Just for icing on that cake — the Buckeyes were also doing that with senior starter Jonathon Cooper still out with an injury.

The feel-good story of C.J. Saunders was poised for a perfect fairytale ending, the former walk-on constantly grinding throughout his career and eventually becoming a captain for his hometown Buckeyes. But a training-camp injury has robbers Saunders of his moment, and while the fifth-year senior wide receiver looked to be close to returning to boost the attack as an H-back target in the slot, another setback is instead going to put him on the shelf for the rest of the season. Multiple sources confirmed to Lettermen Row that Saunders won’t be able to play this season, which became more clear when the Dublin Coffman product hobbled into the Horseshoe on crutches on Saturday. Sources with direct knowledge indicated that an appeal for a medical redshirt has been in the works, but there has been no decision at this point about whether Saunders would return for another shot to make the impact he and the Buckeyes had been working so hard for over the years. 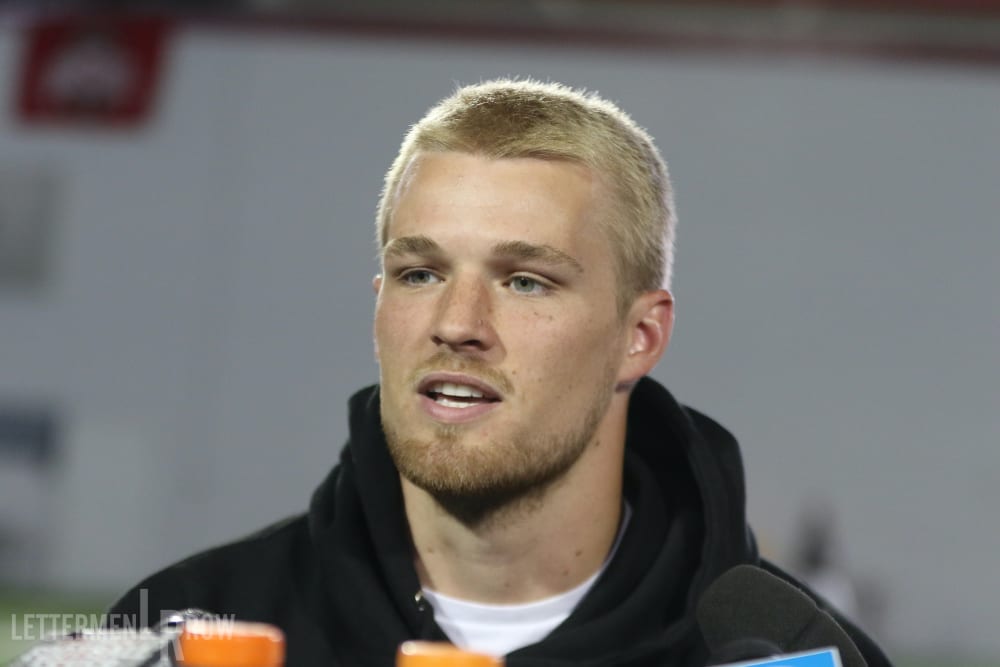 Ohio State wide receiver and captain C.J. Saunders appears to be out for the rest of the season. (Birm/Lettermen Row)

The numbers were still relatively modest, and the way the game played out was almost ideal for spreading around touches and snaps. But after a preseason full of hype, an opening week that suggested significant production was coming and then another long stretch without many targets, the tight end position again popped back onto the radar for the Buckeyes. Jeremy Ruckert had already shown how far he had come as a blocker and how much trust Ohio State had in him over the first eight games, but his two catches for 30 yards hinted there is more to come with the skilled sophomore. With a unique combination of size, agility and hand-eye coordination, Ruckert has always had the potential to torment defenders — and more chances could well be on the way.

The second-half showcase the Buckeyes wanted for their young guys arrived, and there might not have been anybody who made better use of it than Marcus Crowley. The freshman running back did have a brief injury scare, and Ohio State was holding its breath when he went into the medical tent after taking a shot near his knee on his final carry of the game — another that happened to flash his big-time potential. Crowley obviously isn’t going to supplant J.K. Dobbins, and Master Teague is entrenched in the backup spot after powering his way to 111 yards to lead Ohio State against Maryland. But Crowley breaking off 82 yards on eight carries with a touchdown when it was his turn offered the latest suggestion that the pipeline is fully loaded for position coach Tony Alford and will be just fine when the end of the Dobbins Era arrives. 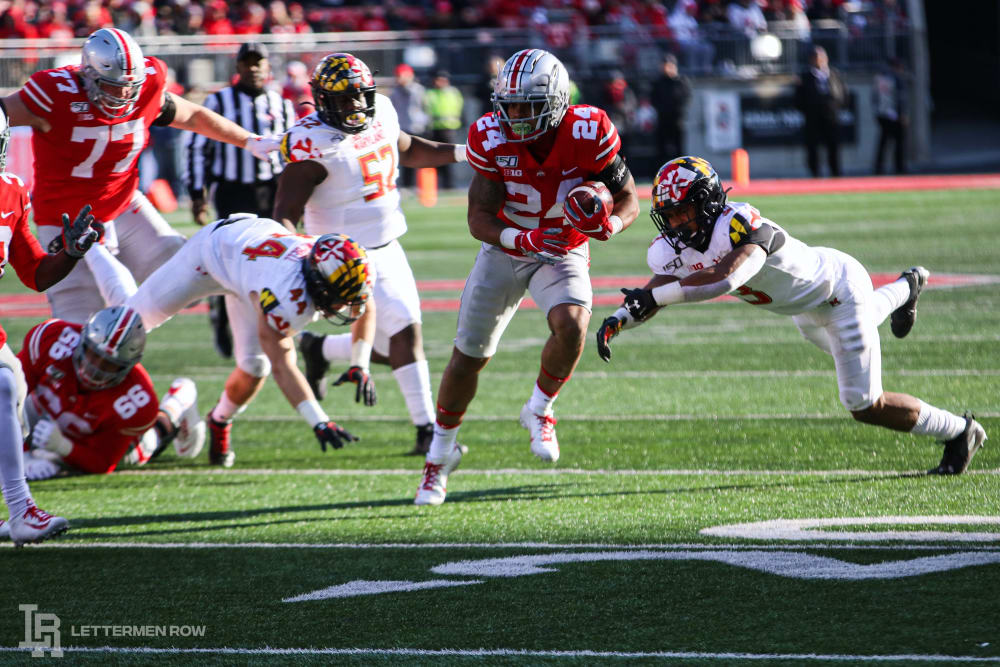 Chris Chugunov can sling some deep balls for Ohio State

The prettiest throw didn’t wind up counting for Chris Chugunov. But the deep strike down the middle the field that was nullified by penalty wasn’t the only eye-opening toss from the backup quarterback, and it’s starting to seem like the safety net behind Justin Fields is a bit more secure than anybody could have imagined back in training camp. There would obviously be a drop-off if the Buckeyes had to go from a Heisman Trophy candidate who accounted for four more touchdowns against Maryland to a guy who at one point was ready to hang up his cleats before transferring to Ohio State merely as a depth arm. Yes, the Terrapins aren’t exactly a huge defensive challenge. But even if the Buckeyes had been practicing against the scout team, a number of Chugunov’s eight completions for 103 yards would have turned heads with the accuracy, poise and strength of his arm. Just for good measure: Chugunov is not Fields. But the backup is far more capable than he tends to get credit for heading into the final three weeks of the regular season.