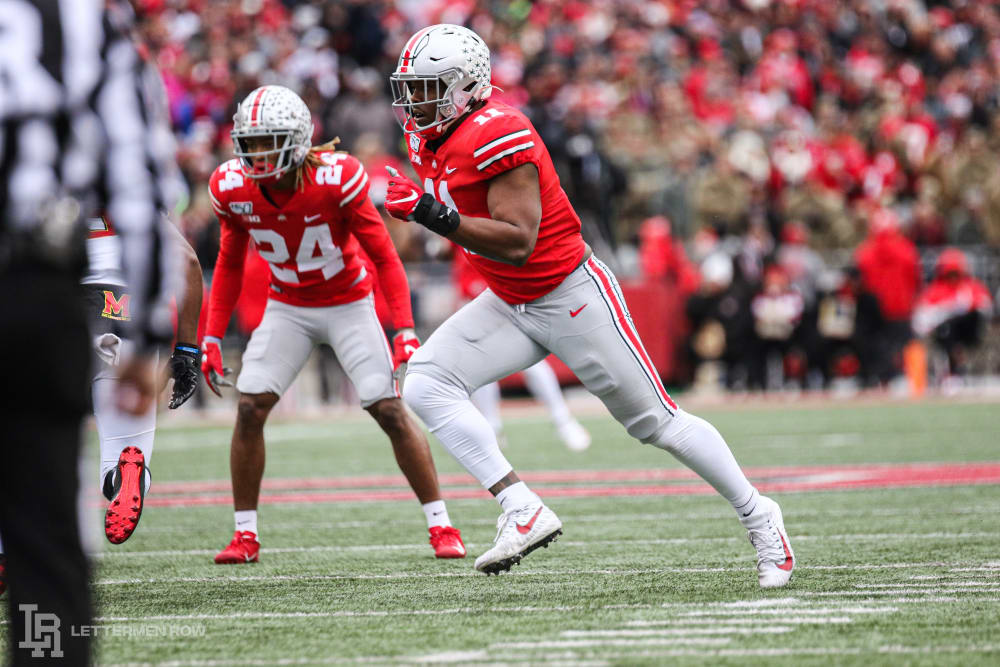 Ohio State defensive end Tyreke Smith was a force for the Buckeyes against Maryland. (Birm/Lettermen Row)

COLUMBUS — Tyreke Smith sounded just like every other dominant defensive end that has come through Ohio State in the last few years.

Minutes after he walked off the field at Ohio Stadium following Ohio State’s 73-14 throttling of Maryland, Smith was asked about his two-sack performance as he represented Chase Young-lite while the best player in the country serves an indefinite suspension.

Smith didn’t want to take the initial credit for the sacks. No, that goes to “Coach J” — Larry Johnson, the legendary defensive line coach that has had his hands on the Bosas, Young and other giants of the position for the Buckeyes. He knows how to teach them, and Tyreke Smith is just the latest example.

“He’s such a great coach,” Smith said. “I was just keeping [his advice] in my head, getting off the ball, and everything came from there. It was pretty smooth. Smooth sailing.”

In a game that featured neither of the Buckeyes two preseason starters at defensive end, Ohio State still managed to record a season-high seven sacks as a team in the route of Maryland. Smith and Davon Hamilton split the team-lead with two sacks each, making the Terrapins offensive line look like a Washington D.C. Metro turn style rather than a Big Ten offensive line.

That’s what Larry Johnson does, though. He recruits four- and five-star defensive linemen and molds them into dominant forces that shed blocks, make plays and collapse quarterback pockets. Need a recruiting pitch for why Ohio State is the place for a defensive end prospect? Throw on the tape from Saturday’s game. Young and senior captain Jonathon Cooper weren’t on the field, and the Buckeyes didn’t miss a beat on the defensive line.

That’s because Johnson’s teaching of technique and hand-placement are second to none in the country. And Johnson allows rising young stars to excel as if they are ready to help the Buckeyes in their pursuit of a national title this season.

“It was good to just get out there and just do good, get some of the other guys in and let them shine a little bit, so it was really fun just to see my guys going hard, everybody playing playing as a team,” Smith said. “It was really good.”

He just made sure to thank Coach J before saying anything about himself. He understands how much the teaching helps. But Larry Johnson and the defensive line aren’t the only Buckeyes who looked impressive and helped their cause in the win over Maryland. Lettermen Row picked four other Buckeyes, too. 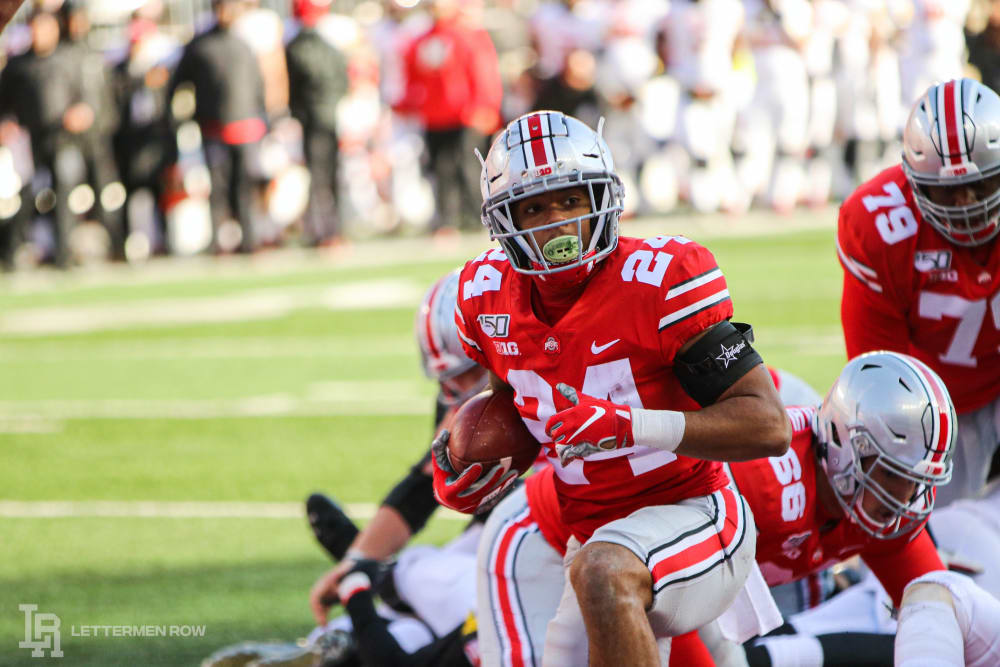 Ohio State running back Marcus Crowley turned in some impressive work for the Buckeyes. (Birm/Lettermen Row)

After J.K. Dobbins had his fun scoring two touchdowns in the first half against Maryland and Master Teague eclipsed the 100-yard mark, Marcus Crowley was the next running back off the bench to carry the ball and run the clock for the Buckeyes. He looked great doing it, too. Crowley finished the day with 82 yards and a touchdown on only eight carries, which included a 25-yard burst into the open field. Crowley showed shiftiness, elusiveness and an ability to make plays with the ball in his hands — albeit against an awful Maryland team. The future of the Cadillac position at Ohio State seems to be in good hands.

Chris Chugunov came out of the locker room in the second half ready to throw the ball all over the Ohio Stadium turf, and that is precisely what he did Saturday. Chugunov led two scoring drives for the Buckeyes, which should provide more comfort for the program behind Justin Fields. The touchdown pass he threw to Garrett Wilson was a well-placed, pretty pass with some touch, dropping right into Wilson’s hands for a score. Chugunov finished the game with 103 passing yards and the score. He also threw a beautiful deep ball to Wilson later in the second half, but it was nullified due to penalty. If it would have stood, Chugunov would’ve had an even more impressive stat line, especially for a backup quarterback. 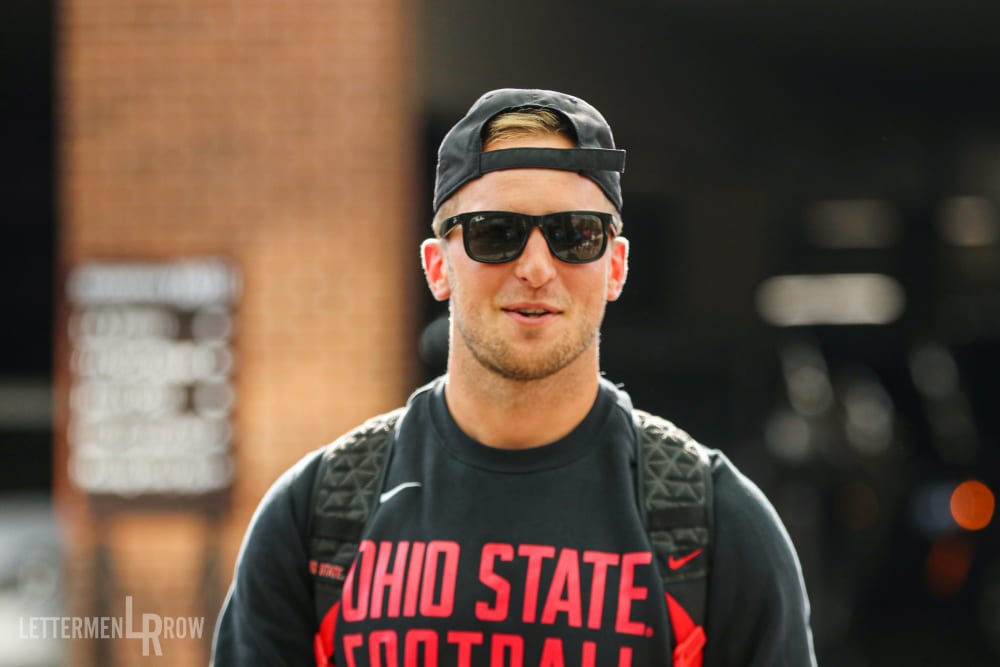 After the years of recruiting hype and decision making, Zach Harrison officially started his first game for Ohio State against Maryland, and he showed why he was a top prospect just one year ago at this time. Harrison handled his start well, coming up with a sack of Terrapins starting quarterback Josh Jackson. After the sack, Harrison was so excited that he flexed and celebrated with his teammates a little too much, drawing a 15-yard penalty. It was a questionable call, but Harrison still learned the lesson of keeping emotions in check after big plays. His performance — for a first start — was encouraging for the future of the Rushmen.

The Buckeyes played an overmatched Maryland team that struggles to get to the quarterback, but the fact that Ohio State kept Justin Fields from getting sacked during his 25 first-half passing attempts is a step in the right direction. The blame for the number of sacks Fields has taken this season shouldn’t rest solely on the offensive line — Fields sometimes holds the ball longer than the offensive line can block. After the off week, Thayer Munford and others were able to get healthy again, proving that when up to speed, the Ohio State offensive line can keep Fields upright to help the offense click. Oh, and the Buckeyes had their best rushing output of the season Saturday. Not a bad day in the trenches.