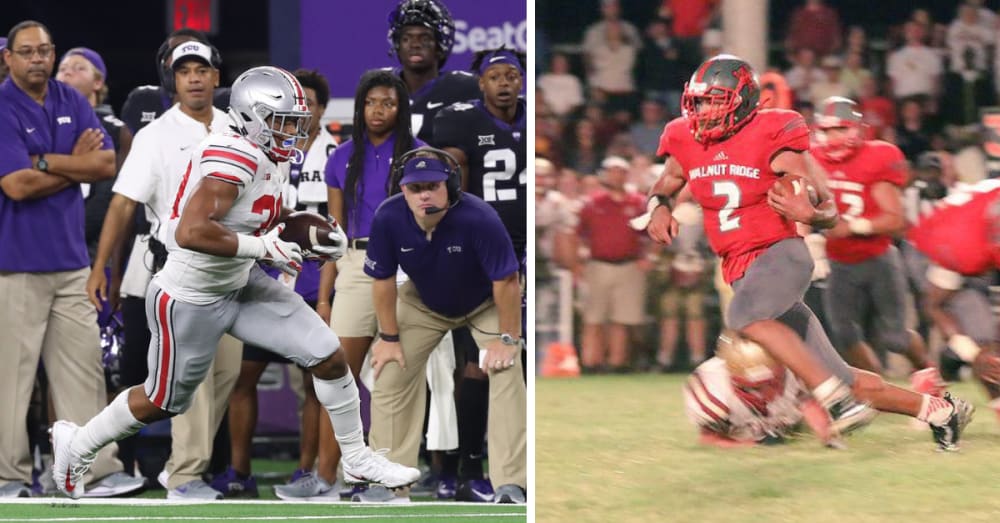 Ohio State linebacker Malik Harrison has also been dangerous with the football in his hands dating back to high school. (Matthew Emmons/USA TODAY Sports and Malik Harrison/Twitter)

Study the film and the quarterback in Malik Harrison typically is revealed on screen.

Yes, he’s a clearly a linebacker now at Ohio State. And the junior with a combined 23 tackles in back-to-back games against Purdue and Nebraska showcased his steadfast demeanor as the Buckeyes have sought answers for a defensive unit besieged both by injuries and inconsistencies.

But heading into a trip to Maryland, Harrison’s high school coach can still see of that versatility that allowed him to shine on the other side of the ball.

“That’s one thing that I remember,” Walnut Ridge coach Byron Matton said. “Malik played linebacker and was my quarterback for three years, and he was always even-keeled about how he went about his business.

Harrison’s increasing production for the Silver Bullets is helping to steady a defense coming off its best performance of the season as the Buckeyes prepare for Saturday’s road game at Maryland. While notching four tackles last week at Michigan State, boosting his team-leading total to 52, Harrison also keeps showcasing his awareness in pass defense with a pair of break-ups. 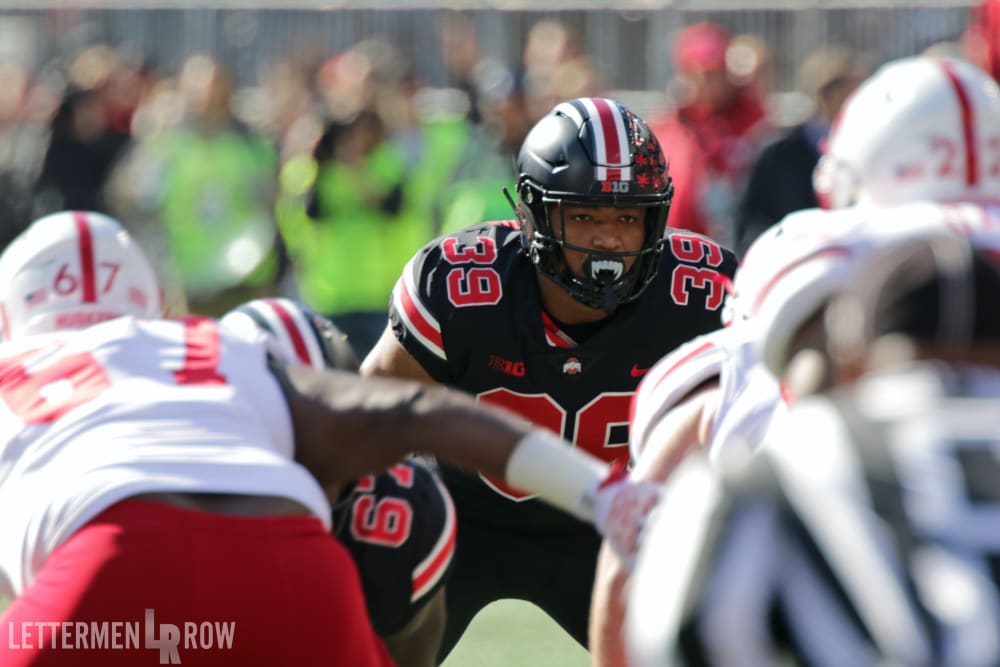 Ohio State linebacker Malik Harrison is playing his best football of the season when it matters most. (Birm/Lettermen Row)

“The team took their lead off Malik in a lot of ways,” Mattox said. “If something wasn’t going too great, he was still calm in his demeanor. He was not nervous or out of focus. He’d get excited, but still he was calmer than a lot of the guys.”

“It drives me crazy, drives us a little crazy but we still have to get it down pat and keep it in front of us,” Harrison, who notched his first career interception in the comeback-win against TCU, said recently. “It’s hard [with injuries and adversity in the lineup], but at the end of the day, it’s next man up. We prepare our guys to just be ready when your number is called.”

Mattox remembers calling Harrison’s number im a variety of situations during Harrison’s prep career. And he laughs to this day thinking about the vicious stiff-arm Harrison delivered to a would-be tackler.

“He had a really wicked stiff-arm,” Mattox said. “It looked like that tight end for the Steelers a lot of times, he’d just stiff-arm kids and they’d crumble to the ground. He jumped over a couple guys in high school.

“One other thing that stands out, he was playing basketball, some of the dunks. He was just the leader of that basketball team and brought a lot of excitement to the games with his acrobatic dunks and all that type of stuff.”

As Harrison keeps bringing a stabilizing presence to the Buckeyes, he also is providing a picture of success as a hometown role model.

It was great chopping it up with @Leek_39 tonight. Never seen a big-time athlete support his alma mater the way Malik does. It’s pretty cool to see. Gives the kids at Walnut Ridge someone to look up to and an example of what can happen when you do the right things.

“It’s huge because Malik’s still a guy that a lot of kids look up to, grew up in the same neighborhoods and went to Walnut Ridge,” Mattox said. “The guy you see is the guy he really is: Nice, humble, mild-mannered.

“Kids look up to him, and what you see is what you get.”

What you see is a guy growing into his role as quarterback — on the Ohio State defense.