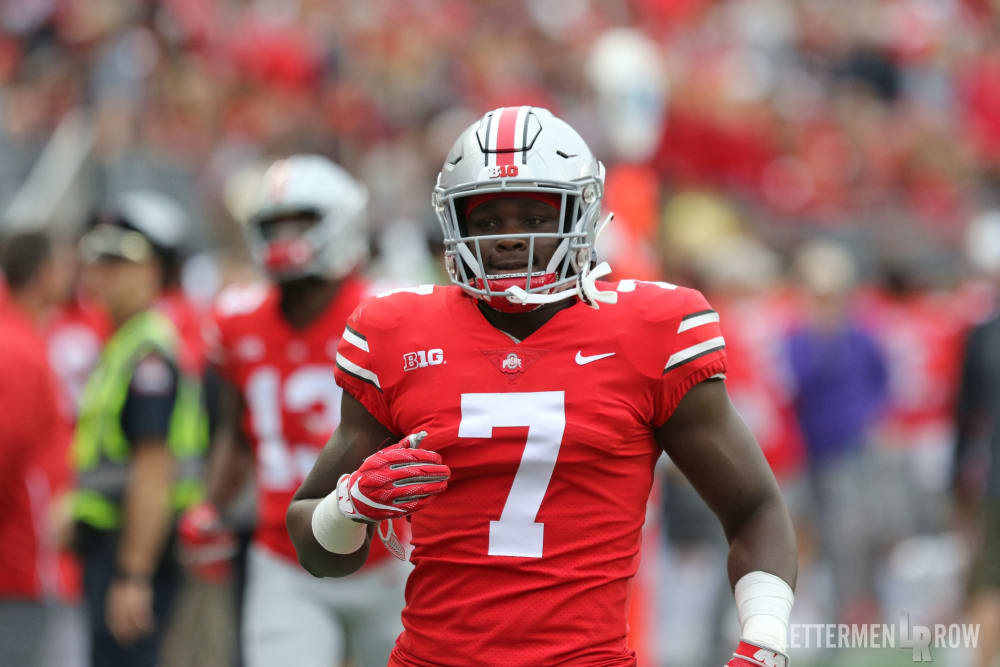 Ohio State freshman Teradja Mitchell could be a potential candidate to help the Buckeyes down the stretch. (Birm/Lettermen Row)

The speculation, debate and conversations about Ohio State never end, and Lettermen Row is always ready to dive into the discussions. All week long, senior writer Austin Ward will field topics on Urban Meyer and the Buckeyes submitted by readers and break down anything that’s on the minds of the Best Damn Fans in the Land. Have a question that needs to be tackled, like the one today about the linebackers? Send it in right here — and check back daily for the answers.

O line looked pretty confident opening up the run game. White appears to be a potential player to strengthen the defensive backfield.
Is there any one player you could see stepping up to strengthen the LB play?

Given the choice of only one non-starting linebacker who might need more snaps down the stretch, Baron Browning is the easy pick. But Ohio State actually has a handful of talented tacklers who could emerge during the potential November run, which is a big reason why it has been a bit puzzling that the unit hasn’t experimented more with different personnel to jumpstart the production.

In addition to Browning after he added another tackle for loss in the win over Nebraska, Keandre Jones showed his twitchy athleticism by blocking a punt, Justin Hilliard has flashed when given a chance to play, Dante Booker brings a veteran presence and freshmen Teradja Mitchell and Dallas Gant both clearly bring a lot of impressive tools to the table. Given how consistently or stubbornly Ohio State has stuck with Tuf Borland, Pete Werner and Malik Harrison, it would be reasonable to assume the cupboard is bare — but that’s just not the case at linebacker.

To be fair, Harrison had one of his best outings of the season with 13 tackles last week. Borland added eight of his own, and Werner has noticeably improved over the course of the year into a solid defender. But given what the Buckeyes just saw happen at another defensive spot with Brendon White exploding when given a chance to get meaningful reps at safety, it surely wouldn’t hurt at some point for position coach Billy Davis to test the waters with his group as well.

“We haven’t had those opportunities like we’ve had in the past to get guys in the game,” Ohio State coach Urban Meyer said. “But the best opportunity to get them is at practice — come show yourself and get going.

“You can see on special teams, [safety] Josh Proctor did a heck of a job for us on the opening kickoff or the second kickoff. And other guys coming on like Teradja Mitchell and some other guys are doing very good for us in special teams. Practice, special teams and an opportunity to play on defense.”

Considering the way Ohio State has struggled throughout the year with giving up big plays, it surely couldn’t have hurt much to tinker with the personnel. On the flip side, there is surely a good reason that an experienced, well-compensated coaching staff hasn’t done so based on everything it has seen on the practice field so far this season.

But the Buckeyes were also essentially forced to turn to White on Saturday, and he was obviously ready for his opportunity.

Would the same thing happen if Ohio State unleashed Mitchell or Browning or any of those options at linebacker? There’s no way to know for sure what would happen, but it’s impossible to find out if they’re always on the sideline.